Weird Lines From CNN’s Democratic Debates That Nobody Is Covering 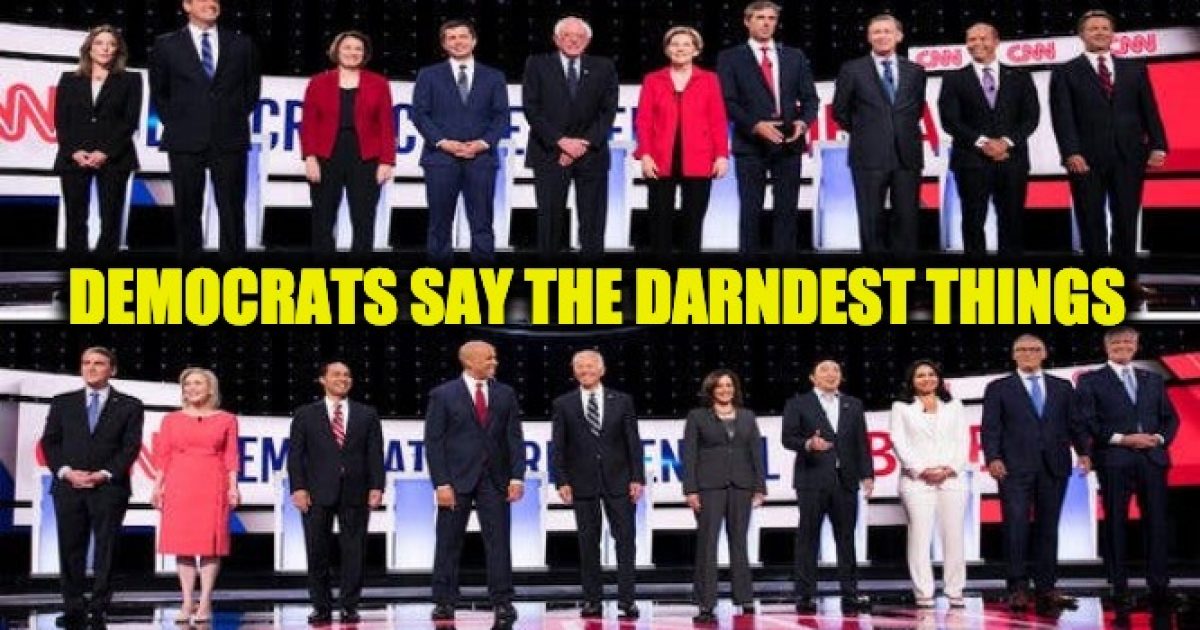 I didn’t really watch the round two debates on CNN this week. I saw some of it. Tuesday night America’s Got Talent was on and much more entertaining than debates for a Democratic field of twenty. Wednesday night Battlebots was on. After an 18 hour day of reading, researching, and writing about politics, my brain needed a break. But feeling guilty I’d turn to CNN for a moment or two during commercial breaks for the more entertaining TV program. For some reason, however, during almost every one of those short debate views, I’d hear candidates say something extraordinary or ask a bizarre question, such as the candidate who admitted to being a peeping, Tom.

Since the two debates ended, some of those strange lines were mentioned by the MSM, but they covered up what the candidates were really saying.

Below are some examples of what I’m talking about:

New York’s Senator Kirsten Gillibrand whose entire campaign is based on equal rights for women’ said: “The first thing I’m going to do as president is I am going to Clorox the Oval Office.”   Gillibrand’s priority made me wonder why she believes a woman’s primary role was doing housework. And after she cleans the oval office will she take in people’s laundry and make some sammiches?

Kirsten shouldn’t worry anyway she’s not going to be elected. It doesn’t matter because I’m sure Bush #43 had the oval office wiped with some heavy-duty cleaning fluid (and possibly acid) when he took over in January 2001. After eight years of it being used for Bubba Clinton’s sex and cigar parties something had to be done.

Even liberal reporters didn’t give Bernie Sanders any credit for saying something brilliant.  He explained the concept of liberalism and socialism better than anyone else–ever. During one of my channel flips, I heard him scream, “I wrote the damn bill.”

It was astonishing that no one pointed out Elizabeth Warren said something proving she knew little about politics. She said, “I don’t understand why anybody goes to all the trouble of running for president of the United States just to talk about what we really can’t do and shouldn’t fight for. I don’t get it!”  Anybody who’s ever followed politics knows the reason.

Those candidates she criticized run to make money off of writing a book, to increase their fees for speaking engagements, and secure a contributor gig on MSNBC or CNN.

At one point on Tuesday,  I thought I’d switched to the wrong channel. Either that or that CNN started carrying Seinfeld. I put on the debate and heard someone saying Yada-Yada-Yada, and quickly turned back to AGT. It took the next day’s newspaper to let me know it was part of the debate. Candidate, self-help guru, and Oprah’s spiritual advisor  Marianne Williamson was saying so many Americans believe Yada-Yada-Yada, but I think she’s lying.

After checking the big pollsters like Gallup and Rasmussen…not one asks people about their belief in Yada-Yada-Yada. At least not one admits to asking. Perhaps they asked the question but didn’t publish the results due to some dark psychic force.

I didn’t hear his entire line, but  Rep. Tim Ryan may have agreed to Congress funding the building of the southern border barrier as long as some electronics were included. What I heard him say was,  “Right now, when you want to come into the country, you should at least ring the doorbell.” Man if that’s all it takes that’s exciting, but did he check with Pelosi?

Former HUD Secretary Julián Castro is a braggart. During one commercial break, I heard him make the claim that he is more coordinated than the average liberal. No one really cares about a president’s athletic prowess. Castro said, “I really do believe we can walk and chew gum at the same time.” Hey, Julian, there were children were watching, at the very least you should have said sugarless gum!

Sen. Amy Klobuchar admitted to being a peeping, Tom. Switching over from BattleBots, I heard her talk about President Trump. She said, “I don’t think we should conduct foreign policy in a bathrobe at 5 in the morning, which is what he does.” How the heck does she know what Trump is wearing at 5AM?  Which White House window is she peeping through? Did she direct Obama to put cameras put in the White House bedroom before Trump’s inauguration day? Either way, peeping is illegal, the Secret Service should get right on this!

Senator Sparticus, Cory Booker is not very observant. Well, either that or he likes to taunt old people, which is not very nice. Clicking over to the debate, I saw Booker turn to former VP Biden and say, “You’re dipping into the Kool-aid, and you don’t even know what flavor it is.” If the New Jersey Senator saw Biden dipping into the Kool-Aid, why didn’t he see what flavor it was? No matter the flavor, if Biden was about to take a dip in Kool-Aid, why didn’t Booker stop him? Does he get kicks seeing an old guy swimming in a vat of a powdered drink and water?

The next Democratic Party debates are scheduled for September 12 and 13 (on ABC). The way things look now, there will be fewer candidates who will meet the polling and fundraising minimums and earn participation, so that debate may be one night. However, Septemeber is the beginning of the new TV season and Tuesdays are the night for NCIS and NCIS New Orleans. On Wednesdays are the three Chicago dramas (Med, Fire, and PD). Therefore, the Democrats will have to get much more interesting to motivate me to tune into debates before the General Election ones when President Trump gets involved.