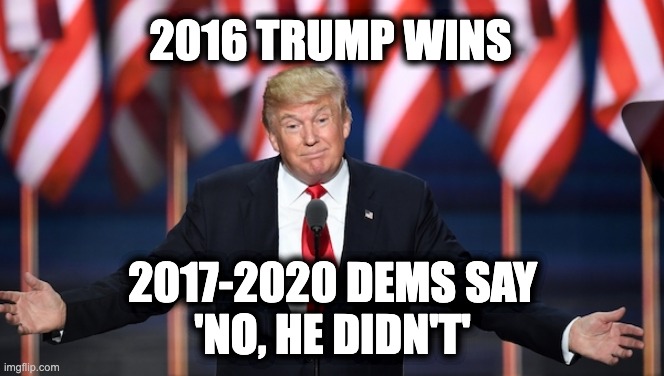 The Democrats and liberal media have been having a cow because President Trump still says the 2020 election was stolen. Some even say it’s a threat to the future of our republic. While the best thing that Trump can do for his party and his own political future is to talk about the future, the Democrats and the MSM forget that much of the Democratic Party, including Joe Biden, never really conceded in action that Trump won the 2016 election. Then they transitioned to trying to overturn the people’s vote.

When Trump’s national security choice General Flynn spoke to the Russian Ambassador, which was standard procedure for an incoming NSA,  Joe Biden suggested the General be investigated for a Logan Act violation. The only reason to suggest that was they didn’t believe Trump was legitimately president-elect.

They were silent about John Kerry, who tried to negotiate foreign policy without permission from Trump admission. He was trying to delegitimize the 2016 election.

Hillary Clinton made a “concession” speech on the  2016 election night. Still, her actions and those of the Obama Administration, the DOJ, and the FBI demonstrated that her speech was only words. They refused to concede. Instead, they obstructed the approval of his cabinet picks, tried to block his foreign policy, and created the Russia hoax. And after the Russia Hoax didn’t work, they made a fake Ukraine story because the party still didn’t believe Trump was fairly elected.

After President Trump submitted his cabinet picks, then-Senate minority leader Chuck Schumer led the Democrats to make slanderous accusations about people Trump sent to the Senate for confirmation. Schumer “slow-walked” the nominations delaying cabinet approval votes even when he knew he couldn’t win.

We recently learned that before the 2016 election (August), the FBI knew that the source who provided the bogus information to Christopher Steele for his dossier was believed to be a Russian Spy. According to Sen. Lindsey Graham, the FBI knowingly withheld the truth from the FISA Court because they could use it against Trump, and the Hillary Clinton camp was behind the dossier and the Russia Hoax.

In April 2020, America learned from DOJ Inspector General Horowitz that the FBI knew early on, the dossier was bogus and came from a possible spy. However, they still used the false claims in the document as an excuse to investigate Trump and his campaign. The FBI was trying to boot him from office. They didn’t want to recognize that Trump was President.

In November 2021, John Durham arrested a Russian national who allegedly worked as the researcher for Christopher Steele’s infamous dossier. The Russian,  Igor Danchenko, has been charged with lying to the FBI on five different occasions between March and November 2017. The indictment clearly mentions that the dossier itself was compiled at the behest of the Clinton campaign and accuses her 2016 presidential campaign of involvement with the Russians. Isn’t that an insurrection?

FBI agent William J. Barnett a member of the Muller Team assigned to investigate General Flynn was interviewed by Assistant U.S. Attorney for the Eastern District of Missouri Jeffrey Jensen in 2020. Basically, his testimony was that there was no foundation for the Russiagate investigation and that it was only being done to hurt President Trump. The interview revealed that Mr. Barnett believed:

“the FBI’s Trump-Russia probe was ‘opaque” and “with little detail concerning specific evidence of criminal events.’” In other words, there was no there—there. And after six weeks on the Mueller team, he “still unsure of the basis of the investigation concerning Russia and the Trump campaign working together, without a specific criminal allegation,” and “Barnett believed the prosecution of Flynn by Mueller’s office was used as a means to ‘get Trump.’”

Just another attempt to overturn the 2016 election.

Rep. Adam Schiff insisted that he had evidence that President Trump had colluded with the Russians because he didn’t want to concede the 2016 election was real. Even in 2021,  He never presented that evidence. But afterward, he insisted that an investigation of the Bidens’ possible conspiracy with China would degrade our democracy— even though there are witnesses and his son’s computer indicating it may be true. But the Democrats aren’t trying to overturn the 2020 election.

Video: Amazing stuff as MSNBC's Joy Reid and Adam Schiff say Republicans investigating a Biden administration would not only be obstruction, but a degradation of our democracy and waste of the people's time. pic.twitter.com/PvodYznI1G

When the Russia hoax didn’t work, the Democrats tried a different take. Still trying to destroy the 2016 election, they investigated a Trump phone call with the President of Ukraine, and took a Trump statement starting with “do me a favor,” and spun the request for a “favor” into a demand/delay in military aid. Using their created falsehood, they impeached  President Trump.

What the MSM and the House Democrats ignored was at the same time the whistleblower about Ukraine was filing his report, Adam Schiff sent his staffer Thomas Eager to Ukraine. There Eager met with Ukraine’s former President and an organization whose staff included the co-founder of Crowdstrike, a DNC-affiliated organization. He also met with the acting U.S. Ambassador to Ukraine, Bill Taylor. Taylor testified as a witness in Schiff’s impeachment witch hunt. The trip and the meetings were not illegal, but the fact that Schiff kept them secret indicates that the entire mess has been a setup from the start. The vote to oust Trump was only nine months before the 2020 election. Therefore it wasn’t an attempt to overthrow 2016. It was an attempt to fix 2020. The current partisanJanuary 6th investigation has the same goal.

Hillary Clinton may have made a concession speech, but she doesn’t believe she lost fairly. Over the past four years, she’s blamed many to steal the election. Here’s are the top 15 reasons Hillary blames for losing the election

Her speech the day after election day was political baloney and had no real meaning. She did not accept the 2016 results.

The Democrats are whining that Donald Trump should stop fighting the 2020 election results. Perhaps if Joe Biden wasn’t such a lousy president, President Trump would not seize the opportunity, move on,  look toward the future. The undeniable truth is whether 2020 was stolen or not, the result has been horrible for this country.