Dem Debate #1: What A Long, Strange Trip It Was 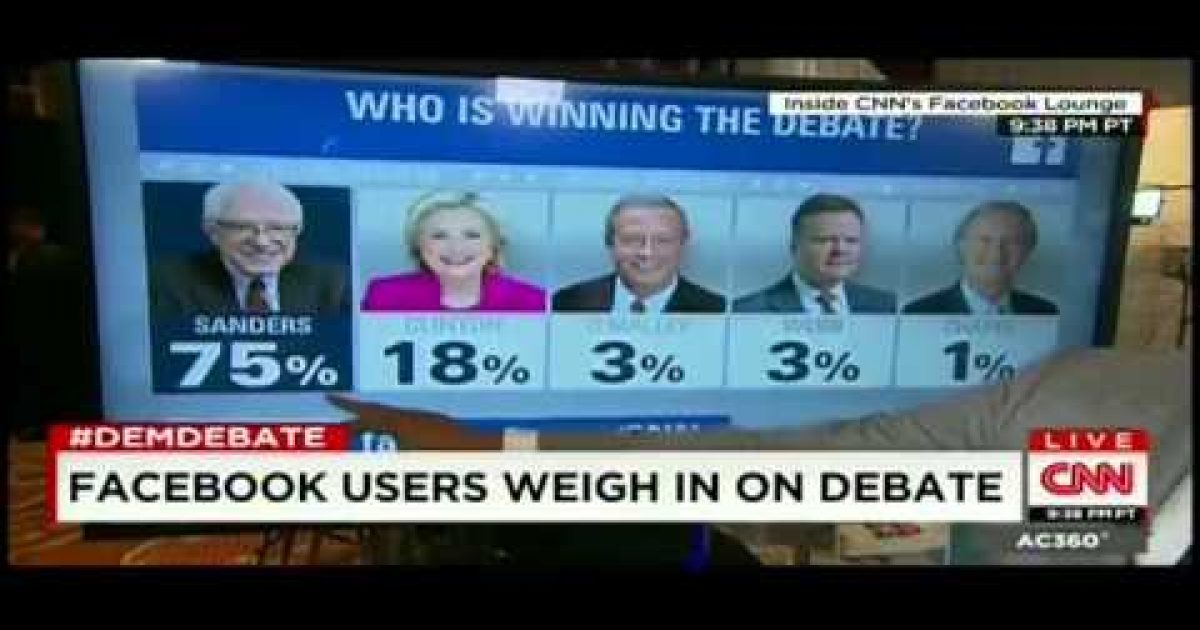 It was 8:50pm on debate night when I looked at my clock and realized that it was going to be a very long evening.  In the first twenty minutes of the first Democratic Party contest CNN introduced the candidates and the moderator and was about to go into its 3rd commercial break. As the night wore on the realization developed that the commercials were the best part of the night, but unlike the Super Bowl Ads these spots weren’t anything special.

It was a strange night in so many ways, especially in the fact that it seemed as if the candidates signed some non-aggression pact, because nobody attacked Clinton on the issues of trust, such as Benghazi and the emails.

The debate contained so much that I though I’d never see in a debate for any party, such as the fact that one candidate proudly called himself a socialist and the others said they were capitalists but sounded just as socialist as the candidate who self-identified as one. The mainstream media often describes conservatives as extremists but that gang of five in the Democratic Party debate were more extreme than any other major party candidates in a debate at least that I can remember.  Putting another way, if Ted Kennedy was alive today he would have complained that the Democratic Party field was too radical.

Even weirder was the fact that to the neutral observer Hillary Clinton was the clear winner by a large margin, but all the initial polling and related data gave the night to Bernie Sanders. He won focus groups conducted by Frank Luntz, by Fusion, and by CNN.  Sanders also won the Facebook “poll,” and was searched on Google throughout the night more than any other candidate.

Moderator Anderson Cooper asked surprising tough questions and strong follow-ups but had a hard time getting the candidates to stop talking when their time was up.

How did each candidate do?

Bernie Sanders gave the most popular answer of the evening when he passionately said America was tired of hearing about Hillary’s emails. Not often has the #2 candidate conceded such as huge issue to the #1 candidate, kind of reminds one of John McCain’s presidential run. What Bernie doesn’t understand is the issue isn’t about the emails it’s a matter of trust.

The rest of the evening Bernie sounded like an old Jewish man who screamed everything because he was hard of hearing….oh wait!  Those who watched the entire debate kept wondering when Bernie was going to start screaming, “Get off my lawn.”

According to Bernie the banks should be broken up, climate change is America’s biggest threats, and companies need to share more of their income with their workers.  Well that’s what I think he was saying…it was hard to tell because he was screaming. But what do can you say about a candidate who traveled to the Las Vegas debate in a Casino bus with all the other seniors.  I hear that with his bus ride Sanders got a bag of quarters for the slot machines.

Debate viewers picked up two impressions about Lincoln Chaffee former Republican, former Mayor of Warwick RI, Governor and Senator of Rhode Island. At one point moderator Anderson Cooper asked the candidates about marijuana and I half expected Chaffee to start by saying he smoked a joint before the debate.  Impression number two is that Chaffee looks a lot like Steve Doocy of Fox News. Of course Doocy doesn’t look stoned and at least last night Chaffee did. At one point he whined that he voted wrong during one of his first votes in the Senate because his Dad had just died.

Martin O’Malley, former governor of Maryland, former Mayor of Baltimore did himself no harm last night, he didn’t help himself either. He seemed to say that his two big issues were gun control and reinstating Glass-Steagall. His one great line was when he went after Trump, “Donald Trump, that carnival barker in the Republican party”

Instead of slamming Hillary as he has done on the campaign trail, Jim Webb slammed moderator Cooper over and over for his lack of speaking time. Webb is strong on national security, but he seemed out of place with the other candidates and at times seemed as if he was running for the party’s nomination.  He is more of a centrist Republican than a Democrat.

Did you know that Hillary Clinton was a woman?  Viewers of the debate heard it over and over and not even when it was appropriate:

COOPER: Secretary Clinton, how would you not be a third term of President Obama?

CLINTON: Well, I think that’s pretty obvious. I think being the first woman president would be quite a change from the presidents we’ve had up until this point, including President Obama.

Perhaps the reference to her gender that was the most cringe worthy was after a commercial break when Cooper said he was happy that everyone got back in time and Hillary alluded to the fact that it takes women longer go to the bathroom.

If last night proved anything it proved that Hillary Clinton will be the nominee of the Democratic Party. No one laid a glove on her (sadly very few tried). She tried and succeeded at her attempts to go to the left of Socialist Sanders and when asked about the four dead Americans in Benghazi she said, “I’ll get to that” but never did.

To the Democrats who watch Clinton fed them red meat and looked presidential and totally avoided answering the questions she didn’t want to answer (something she won’t get away with if she debated a Republican).  She was at her most disingenuous with her answer to the biggest national security threat.

I — I think it has to be continued threat from the spread of nuclear weapons, nuclear material that can fall into the wrong hands. I know the terrorists are constantly seeking it, and that’s why we have to stay vigilant, but also united around the world to prevent that.

That is from the woman who started the negotiations with Iran and supported the nuclear deal which will allow Iran to get nuclear weapons.

Her strangest statement was:

Well, look, you know, when people say that — it’s always the Republicans or their sympathizers who say, “You can’t have paid leave, you can’t provide health care.” They don’t mind having big government to interfere with a woman’s right to choose and to try to take down Planned Parenthood. They’re fine with big government when it comes to that. I’m sick of it.

So cutting money out of the budget is big government?  Gee that was straight out of 1984 Newspeak.

In the end nothing will change after the Debate, Hillary Clinton will continue to lead the Democratic Party pack, Joe Biden will stay out of the race (she did not give him an opening) and it will be really tough for Clinton to pivot to the middle after she gets the nomination (well unless she gets indicted).