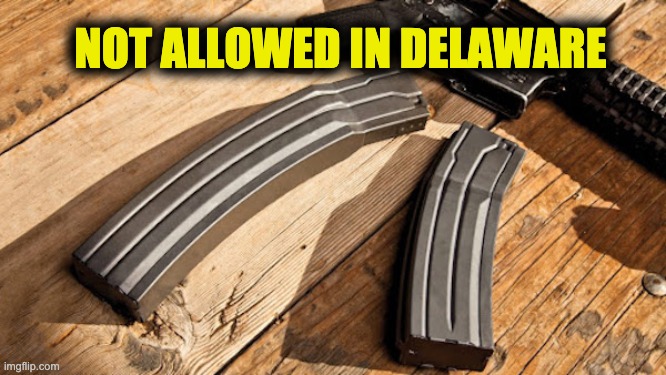 Delaware appears to be on the path toward the confiscation of large-capacity magazines, and it’s just a short step from there to confiscation of the guns that hold them. SB 6, the “Delaware Large Capacity Magazine Prohibition Act of 2021,” passed the Delaware Senate and now goes to the House. It’s expected to be passed, and Democrat Governor Carney is expected to sign it.

The bill reads in part:

I lived in Delaware for five years while working at the state’s largest newspaper.

Despite its small size, Delaware has a thriving Second Amendment community and a very strong gun culture.

Were it not for the liberal bastion of Wilmington — the state’s largest city — Delaware would be a red state.

Governor Carney has been anti-gun forever. During the Pandemic, he specifically listed gun stores as “nonessential” and shut them down. Democrats control both houses of Delaware’s legislature. According to Lee Williams, Carney once said that “military-style weapons can be used to carry out catastrophic acts of violence. They have no place on the streets of our neighborhoods.” A typical statement of an anti-gunner who doesn’t know an AR-15 from a machine gun.

In 2019, several gun control bills were being pushed through Delaware’s legislature, and Democrats caused the Democrat bills to fail. Yes, you read that right. Some Democrats deserted the agenda and voted against their own bills. This is a different crop of Democrats, but they’re still Democrats. You can view some of the applicable gun laws in Delaware at this link.

The Delaware Senate passed this criminalization of magazines, which makes ordinary law-abiding citizens instant criminals. Class B misdemeanors are punishable by up to six months in jail and a fine of $1,150, and Class E felonies are punishable by up to 5 years in prison. Will folks willingly turn the magazines in for a pittance? Some will, others will not. There is no actual magazine (or gun) registration in the state, so it will be interesting to see how they plan to get rid of those magazines. Confiscation will never work in America. But SB 6 is a precursor, as are other gun control bills floating around the country at this time.