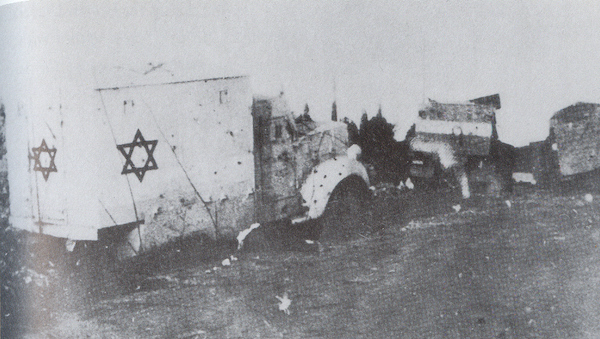 A news article by Marcy Oster on the liberal Jewish JTA news agency/wire service website dated December 24, stated, “The Palestinian village of Deir Yassin was the site of a massacre by Israeli troops in 1948.” The problem: while it is true that Arab and pro-Arab sources have for many years alleged there was a massacre in Deir Yassin — just as they later alleged many Israeli army massacres, the evidence showed it never actually happened.

There were many Arab civilian casualties in the battle of Deir Yassin, but this was because the Arab military forces there employed the time-honored tactic of using Arab residents as human shields. The Jewish forces at Deir Yassin were the pre-state Zionist militias the Irgun Zvai Leumi and LEHI (the Stern Group).

The Zionist militias left one exit from the village open and pleaded with the residents in Arabic, through loudspeaker atop a truck, to leave. Many did. But many others were forced to stay in their homes by Arab soldiers. As a result, civilians were killed in the inevitable house-to-house fighting that ensued.

As an aside, it is well worth noting that there were no “Israeli troops” at Deir Yassin as there was no State of Israel when the battle was fought. The Irgun and the Stern Group attacked Deir Yassin because it was where snipers were based who targeted Jewish civilians in western suburban Jerusalem neighborhoods. The British authorities were doing nothing to stop the snipers. An example of their anti-Israel cowardice, which was and still is their practice. They did nothing to halt anti-Israel massacres that happened under their noses like the one at Hebron years earlier, and today at the UN, they abstain for even the most ridiculous anti-Israel votes.

Embarrassed by a large number of casualties, the leadership of the Jewish Agency — the then-Labor Zionist-controlled Jewish quasi-government in pre-Israel Palestine — decided to accuse their political rivals, the Irgun and Stern Group, of massacring Arabs in Deir Yassin. But in 1969, the Israeli Labor government’s Foreign Ministry — Abba Eban was foreign minister at the time — recanted the allegation, describing the massacre claim as “a big lie” and “a fairy tale.”

The Jordanian newspaper Al Urdun published a survivor’s account in 1955, which said the Palestinians had deliberately exaggerated stories about atrocities in Deir Yassin to encourage others to fight, stories that had caused them to flee instead. Everyone had reason to spread the atrocity narrative. The Arabs wanted to provoke an international response; the Haganah wanted to tarnish the Irgun and Lehi, and the Arabs and the British wanted to malign the Jew

Israeli historian Uri Millstein, in his definitive four-volume history of the 1948 war, interviewed Yisrael Netah, an officer of SHAI, the Haganah (Labor Zionist) intelligence service, who was working undercover, disguised as a Palestinian Arab. Sitting in a cafe not far from the battle zone, Netah encountered Arabs who had just fled from Deir Yassin. Hoping to spread fear among the enemy, Netah drew a political cartoon depicting Jews committing atrocities and claiming that 600 women and 400 children were slaughtered in Deir Yassin. (According to the British census of 1945, there were only 610 residents in the entire village, by the way.) “I exaggerated on purpose to frighten the Arabs,” Netah recalled. “I sent the drawing to the newspapers, through the Arab HQ in Jerusalem. … My drawing was published in an Arab paper.”

The Deir Yassin “massacre” lie was put to rest, once and for all, with the publication last year of the book Deir Yassin: The End of the Myth by Prof. Eliezer Tauber, a former Dean of the Faculty of Jewish Studies at Bar Ilan University. He meticulously reviewed every piece of evidence and interviewed the last remaining eyewitnesses. Prof. Tauber concluded that while a small number of civilians were inadvertently harmed — as was inevitable, given the battlefield conditions and the Arab forces’ actions — “Basically there was no massacre in Deir Yassin.”

Anti-Israel extremists continue to use the lie of Deir Yassin to bash Israel and Zionism. One of the groups involved in the news that JTA was reporting on calls itself “Deir Yassin Remembered.” JTA inadvertently helps boost the claims of these and many other Israel-haters. Herut North America has brought the inaccuracies to the attention of a senior member of JTA’s staff and hope for a correction as well as for JTA to improve their fact-checking.

Let’s hope JTA corrects this error and works to do better the next time a correspondent writes about Zionist history.

Moshe Phillips is the national director of Herut North America’s US division and a candidate on the Herut slate in the 2020 World Zionist Congress’s US elections. Herut is an international movement for Zionist pride and education and is dedicated to the ideals of pre-World War II Zionist leader Ze’ev Jabotinsky. Herut’s website is https://herutna.org/.