The Death Of San Francisco, The City By The Bay (Video) 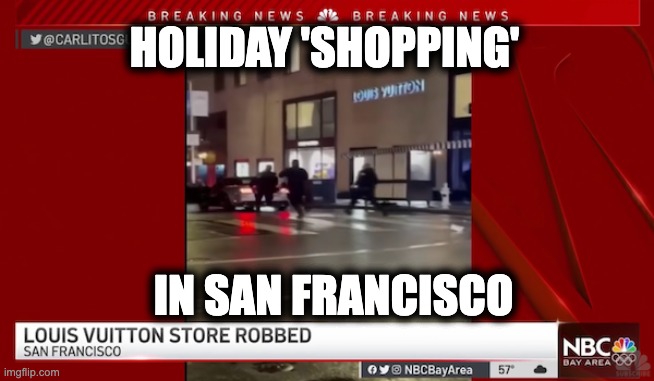 The San Francisco Bay area is home to some of the wealthiest people in the world with home values beyond the wildest dreams of many across the country. Ironically, this epicenter of socialism may be in an uncontrollable death spiral induced by their embrace of suicidal policies destroying their retail sectors.

Just this past weekend, three separate events tell a story of dysfunction and votes of no-confidence by retailers.

Walgreens will be closing its fifth store in San Francisco this week because, according to a store spokesman, “Retail theft across our San Francisco stores has continued to increase in the past few months to five times our chain average.”

This weekend, a coordinated assault on the high-end retailer Louis Vitton was carried out at a San Francisco location. A significant number of criminals sought to loot the store in an apparent mass action.  Police arrived on the scene, arresting several suspects who reportedly battled to continue their looting.  It is unknown at this time if any of those arrested will be prosecuted.

In the San Francisco suburb of Walnut Creek, an estimated fifty to eighty masked thieves swarmed a Nordstrom’s armed with crowbars and other weapons, ransacking the store, carrying off merchandise while terrorizing customers both in that retailer and other adjacent restaurants and businesses.

#Breaking About 25 cars just blocked the street and rushed into the Walnut Creek Nordstrom making off with goods before getting in cars snd speeding away. At least two people arrested at gunpoint. pic.twitter.com/AG3R94M9L3

And earlier this summer, a gang of masked shoplifters hit the downtown Neiman Marcus department store carrying out “armfuls” of designer handbags escaping in getaway cars.

These are just a few instances of outlandishly bold attacks on retailers who employ thousands with no expectation of arrest and prosecution.

Part of the blame for these coordinated mass thefts in the Bay Area resides with a 2014 California ballot initiative that decriminalized theft of less than $950 in goods, making prosecutions rare being fingered for legally encouraging these flash mob theft rings.

But earlier this year, at least one police officer, Lt. Tracy Gray, has said the problem goes beyond this permissive law and points directly at the George Soros-backed District Attorney Chesa Boudin.  Elected by San Francisco voters in 2019, Boudin now faces a recall election after his decisions to end cash bail, stop adding enhanced penalties for gang-involved crimes, and not prosecuting what he calls “quality of life” crimes like public urination and defecation, and prostitution have turned what was once one of the most beautiful cities in the world into a nightmare.

The turn-style catch-and-release criminal justice system combined with the law dictating that property crimes are permitted is directly responsible for companies like Walgreens deciding that being open for business in many parts of the city simply no longer makes sense.  And as companies make the only rational decision, the jobs those retailers provide, disappear throwing thousands out of work.

One wonders how long it will take high-end retailers to follow Walgreens and CVS as broad daylight and early evening invasions become more and more the norm, and customers choose not to take their lives in their hands by going to these once-safe locations.

Unfortunately, this same story is being played out across the country in one form or another as Soros-backed prosecutors choose to use their discretion to rewrite the criminal justice laws in their respective states, effectively leaving their local businesses at the mercy of the mob.

San Francisco’s suicide by Marxist poisoning is a sobering tale. How long until cities like Portland, Oregon, Seattle, Washington, Minneapolis, Minnesota, and New York City follow suit as they each slide into an abyss where private property is not protected and criminals are not jailed?