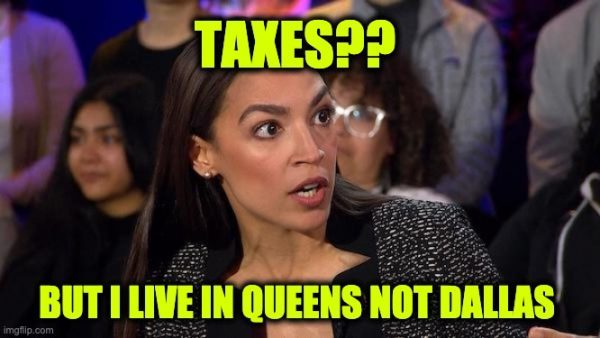 So much for paying business owners paying their “fair share.” deadbeat AOC.

If there is one thing AOC is known for saying, it’s that the rich should pay their fair share. But she has a track record of being a habitual deadbeat who played fast and loose with economic rules. Pretty rich for someone in a committee who enforces such laws upon others, isn’t it?

To recap: Alexandria had to let her Chief of Staff go because he was running a political operation that deliberately mixed campaign and for-profit consultant functions. Because private companies are not subject to the same scrutiny as nonprofits, this made it, in essence, a way of bypassing money tracking steps relating to donations.

Speaking of ‘deadbeat,’ the same woman who went out of her way to pose with unionized workers was oblivious to the irony of her own refusal to pay her obligatory party dues due to differences in … wait for it… political opinion. She stiffed her own party while propping up others in their effort to Primary other Democrats from further left.

AOC has a very jaded view toward business owners. Is this due, in part, to the failure of her own venture? That’s right, as hard as it may be to believe, AOC was once a businesswoman… however briefly. It didn’t work out.

AOC had founded Brook Avenue Press, a publishing house that sought designers, artists and writers from urban areas to help paint The Bronx in a positive way in children’s stories, in 2012.

As the Post previously reported, public records show the state dissolved the company in October 2016. The state can make such a move when a business fails to pay corporate taxes or file a return.

As of Friday, the tax warrant had still not been satisfied, and the outstanding balance had grown to $2,088.78, the department said.

Lauren Hitt, one of AOC’s spox, said, “The congresswoman is still in the process of contesting the tax warrant. The business has been closed for several years now, and so we believe that the state Tax Department has continued to collect the franchise tax in error.”

She’s so quick to condemn everyone else of malice and wrongdoing. But we’re supposed to chalk this up to mere ‘error’?

I dunno… what say you?

Are you buying that explanation?

Not that it really matters for this election cycle. AOC’s own party didn’t support her in the nomination.

Maybe it had something to do with cheering the death of those Amazon jobs. Ironically, they’re practically the only people in New York who WOULD have been working right now.