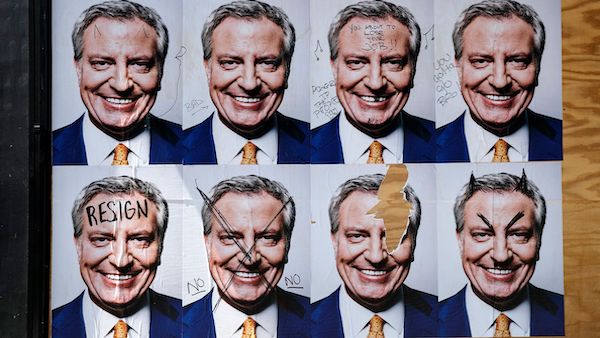 On Thursday, New York Mayor Bill de Blasio bragged about releasing criminals onto the city’s streets to combat coronavirus and claimed the city is safer for it. de Blasio crime

In April, he released 1,500 inmates due to the pandemic. Mayor Bill de Blasio’s office announced Friday that more than 1,500 inmates have been released from city jails in three weeks — shrinking the number of incarcerated to its lowest level in 70 years.

“Largely through efforts from judges, district attorneys, defenders, DOC and New York State DOCCS, over 1,500 people have been released from jail since March 16,” the Mayor’s Office of Criminal Justice touted in a fact sheet posted online. “Today the jail population is at a number last seen in 1949.”

On Thursday Dumb-Dumb de Blasio bragged that the prisoner release made the city safer.

On top of the prisoner release the NYC Bail reform law enacted in January 2020 raised crime levels. Per the NYPD statistics, of those who committed felonies that were no longer eligible for bail (but were in 2019) 19.5% were re-arrested at least once after an initial non-bail eligible felony arrest, 1,798 of 9,227 individuals were re-arrested.  2020 recidivism resulted in 1,452  seven major crime arrests vs. 681 in 2019 (The seven major crimes per the NYPD are murder and non-negligent manslaughter, rape, robbery, felony assault, burglary, grand larceny, and grand larceny of a vehicle).

The Post also reported shootings were up 205% in June in New York City compared to a year earlier. Many attribute that to the disbanding of the NYPD anti-crime unit whose major responsibility was taking illegal guns off the street.

.@NYGovCuomo Please listen to @NYCMayor’s words. He is either completely delusional or believes that New Yorkers are idiots. He needs to be recalled, or whatever it takes to remove him from power and stop his intentional destruction of New York City. https://t.co/Yy5iescnj2

He’s not the only one calling for de Blasio’s removal.  GOP Rep. Lee Zeldin also thinks he should be removed from office,

Mayor DeBlasio is destroying our great city from the inside out. New York City will not make it through the remainder of his term. He needs to be immediately removed from office to save the city and protect the people who live there!pic.twitter.com/ktQbuvXFIj

We agree.  It’s time for de Blasio to be removed from office.  Along with every other left-wing extremist in the country