Rep. Lee Zeldin Calls For NYC Mayor DeBlasio To Be Tossed Out Of Office–NOW 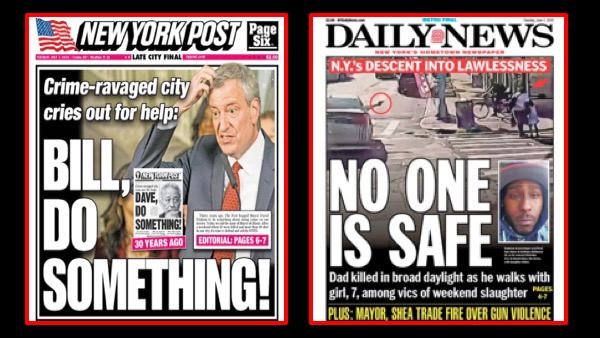 NYC Mayor Bill de Blasio is not a popular fellow among many of his fellow NY Politicians as Rep. Lee Zeldin (R-NY)  called for him to be removed from office.  Zeldin’s biggest issue is the DeBlasio crime wave sweeping across the city, thanks to his no-bail policy and his defund the police push.

Mayor DeBlasio is destroying our great city from the inside out. New York City will not make it through the remainder of his term. He needs to be immediately removed from office to save the city and protect the people who live there!pic.twitter.com/ktQbuvXFIj

Zeldin’s biggest issue is the DeBlasio crime wave sweeping across the city, thanks to his no-bail policy and defund the police push.

An increase in shootings and crime, in general, has plagued New York City so far in 2020, specifically in the weeks and months since the death of George Floyd on May 25. His death sparked protests, both peaceful and violent, on New York streets and in other cities.

More than 100 people were injured by 83 shootings during a nine-day time period from June 19-27 in New York City, and at least six of those victims died.

Last week, at least 14 people were shot in 10 shootings during a nine-hour period in the city, resulting in one death.

With increasing crime, it seems like now would be a pretty horrible time to cut the funding to the local police department, especially with the relationship between NYPD and the mayor’s office already being strained. Yet, that’s exactly what de Blasio did. He slashed their budget by $1 billion.

As part of his cuts, the city also got rid of its plainclothes anti-crime unit as of June 15. The anti-Crime units are made up of undercover, plainclothes cops assigned to each precinct and city housing. In addition to targeting illegal guns, they also combat local crime sprees, like burglaries. But they had to get rid of this unit so DeBlasio could capitulate to the leftist mob calling for the end of police departments.

Many individuals have criticized the move, stating it’s directly caused the increase in the shootings the city is dealing with.

To give you a picture of just how bad things have gotten, shootings in the city have increased 205% between June 15 and July 2 compared to that same time period last year.  Not to city residents: feel like moving?

Thanks to DeBlasio’s lousy relationship with the police, cops are leaving the city in droves.

Between the killing of George Floyd on May 25, with 272 uniformed cops putting in retirement papers from then through June 24, the NYPD says. That’s a 49 percent spike from the 183 officers who filed during the same period last year, according to the department.

“We are worried about a surge in attrition reducing our headcount beyond what we can sustain without new recruits, and are afraid the City Council has not taken the surge into account,” he said.

Police Benevolent Association president Patrick Lynch said cops are “at their breaking point, whether they have 20 years on the job or only two. We are all asking the same question: ‘How can we keep doing our job in this environment?’ And that is exactly what the anti-cop crowd wants. If we have no cops because no one wants to be a cop, they will have achieved their ultimate goal.”

Can you blame them? Zeldin is right, DeBlasio has to go. Sadly there is still over a year left before he is term-limited out of office.