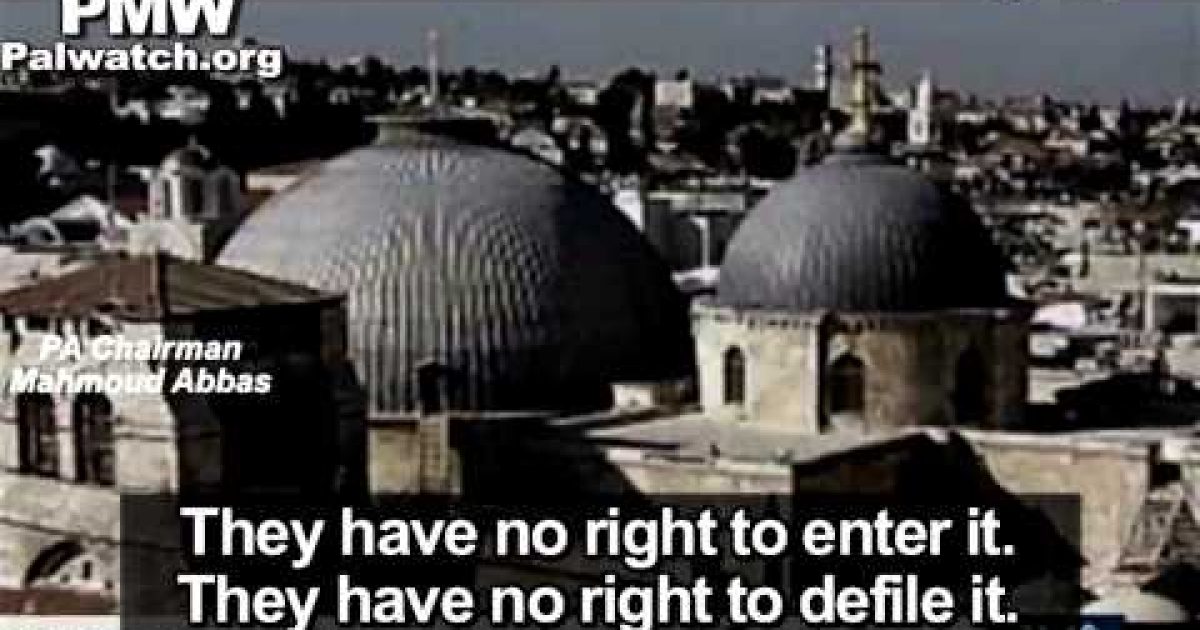 The following announcement by Fatah was reported by the official PA news agency on Thursday October 30th (H/T Palwatch):

Fatah calls to its fighters and to the masses of the Palestinian people to aid the Al-Aqsa Mosque and occupied Jerusalem.

In an announcement that was published by the Fatah Mobilization and Organization Commission today, the movement called to set tomorrow as a day of rage throughout the homeland and in countries which are home to refugees, to express the Palestinian people’s opposition to any attack on the holy places and foremost among them the Al-Aqsa Mosque… And to consider desecration of Al-Aqsa as a declaration of a religious war against the Palestinian people and the Arab Islamic nations.

Last week the official Palestinian Authority TV channel aired at least nineteen times video of “moderate” President Mahmoud Abbas calling for Palestinians to prevent “in any way” Jews from going to the Temple Mount in Jerusalem. On Wednesday evening a Palestinian terrorist shot American-born Rabbi Yehuda Glick, who was fighting for Jews to have the right to pray on the Temple Mount (presently only Muslims are allowed to pray atop mount Moriah).

Deputy Speaker of the Knesset Moshe Feiglin was with the Rabbi when he was shot. He wrote an account of the shooting on his Facebook page:

Here is what happened earlier: The Temple Mount movement held a conference tonight at the Begin Center in Jerusalem. I had spoken and left the Begin Center about half an hour before Yehudah was shot. At the end of the event, Yehudah, accompanied by Manhigut Yehudit General Director Shai Malka, walked outside to his car. There was a motorcyclist with his helmet on standing there. He turned to Yehuda in a thick Arabic accent and said, “Yehuda, I am angry at you,” and then shot him three times point blank.

Rabbi Glick’s attacker, Moataz Hejazi was shot and killed in a gunfight with Israeli police on Thursday morning. Hejazi had served time in jail in Israel and was released in 2012, he was a member of the Islamic Jihad terrorist group.

Israeli police said closed the Temple Mount to everybody on Thursday “to prevent
disturbances” in wake of the shooting of Rabbi Glick. Palestinian President Abbas’ spokesman Nabil Abu Rudeineh told the press that “closing the Al Aqsa
Mosque by Israel is a declaration of war by Israel against the
Palestinian people and its holy places. This is also a declaration of
war against the Arab and Muslim nations.”

As a concession to “keep the peace” non-Muslims are prohibited from praying atop the Temple Mount, even dipping one’s head and appearing as if prayer is intended will cause Israeli police to escort someone of Judaism’s holiest site. Because he campaigns to allow others to pray at the site (and because he is a easily recognizable-tall and red headed) Rabbi Glick has become a target of the Abbas incited violence.

Interestingly very few of the international media stories about the shooting mentioned that Glick was a Rabbi, but at the same time many of them including the NY Times,Economist, and France 24 called him a right-wing activist. Strangely if it was a cleric of any other faith being stopped from praying at his religion’s holiest site those three media outlets and their countries (U.S., Britain, and France) would be fighting to help that cleric get the right to pray as a liberal cause. Apparently to the governments of those three nations freedom of religion does not apply to Jews.

Also noteworthy is that none of those media sources (or according to a Google search) nor any others mentioned the incitement by ‘moderate’ Palestinians such as President Mahmoud Abbas in the video above as an incitement for the shooting.