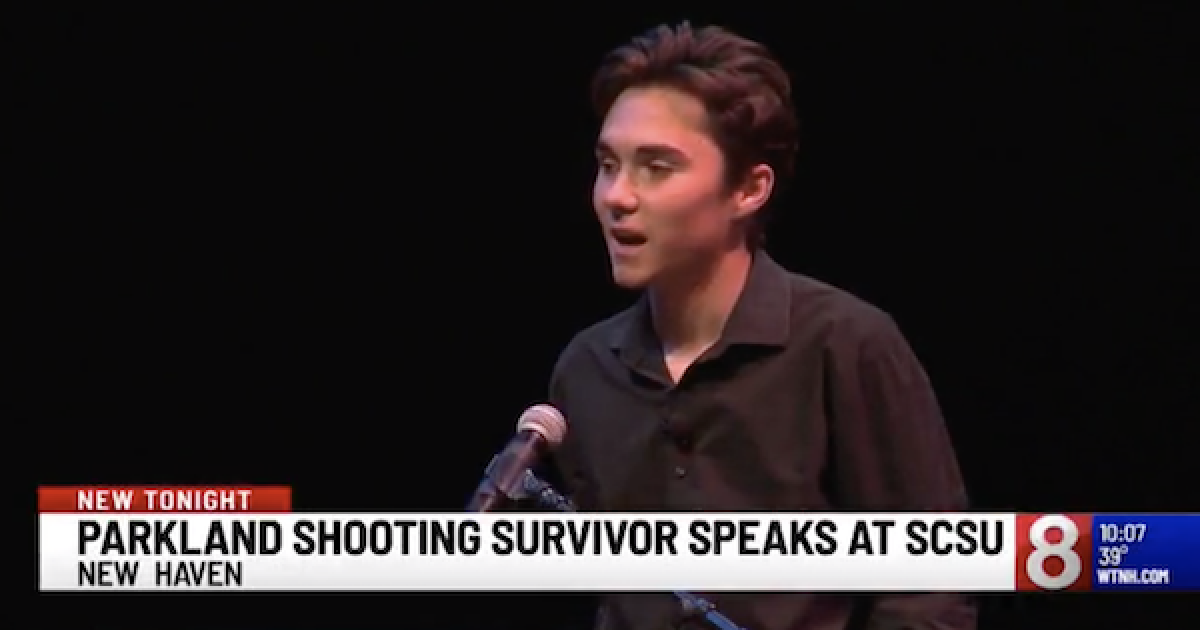 Anti-gun Florida teen David Hogg, the Marjory Stoneman Douglas High School student who has become a media darling since February’s mass shooting, preached gun control during an appearance Tuesday at Southern Connecticut State University, declaring his intent to work with “the new Congress” in 2019, according to the New Haven Register.

The school is hosting events for “Social Justice Month” throughout November to inspire students with “awareness,” “knowledge,” and “action” by inviting gun control advocate David Hogg, as well as by hosting seminars on racial and gender privilege.

Per Campus Reform, Hogg was hosted on Tuesday 11/2 to discuss how “grassroots activism and social media mastery have mobilized millions of young people to find their voice, speak out and engage in change.” The college does not appear to offer a pro-Second Amendment or gun rights perspective during the month-long social justice event.

The New Haven Register explained that Hogg, according to the newspaper, appeared at the John Lyman Center for the Performing Arts. He asserted that research on so-called “gun violence” is necessary because it is “an issue that kills over 40,000 Americans annually.”

It is not clear where that figure came from. According to the FBI Uniform Crime Report for 2017, there were 10,982 gun-related homicides for the entire year. Homicides account for roughly one-third of all firearm fatalities in any given year. Anti-gunners routinely combine the number of murders with suicides, accidents and justifiable homicides by police and armed private citizens to create a more dramatic, and many argue, misleading picture of “gun violence.”

Over the past five years for which data is available (2013-2017), the firearm-related murder total has not exceeded 11,500, although there has been an uptick in the number of such murders.

“Young people can change the world as long as they believe in themselves and never give up,” Hogg told the audience.

These are the young people whom retired Supreme Court Associate Justice John Paul Stevens encouraged to repeal the Second Amendment back in March. He retired in 2010 to be replaced by Elena Kagan.

The newspaper noted that Hogg “became a gun control activist after his high school was the scene of a mass shooting Feb. 14.” He is identified as a co-founder of the “March for Our Lives” student movement.

He has become the face for anti-rights activism which is “trying to keep the conversation alive” even though the gun debate flows and ebbs whenever there is a high-profile shooting.

Hogg’s group, according to the newspaper, advocates for so-called “universal background checks,” a ban on “high capacity” magazines, research on so-called “gun violence” and mandatory “safe storage” and theft reporting. Rights activists contend that none of these measures appear to prevent violent criminals, but only law-abiding firearm owners. But that’s not his concern, his primary concern is making David Hogg a media darling. If he really cared about new gun laws, he would sit down and figure out a solution that prevented gun violence without hurting law-abiding firearm owners.