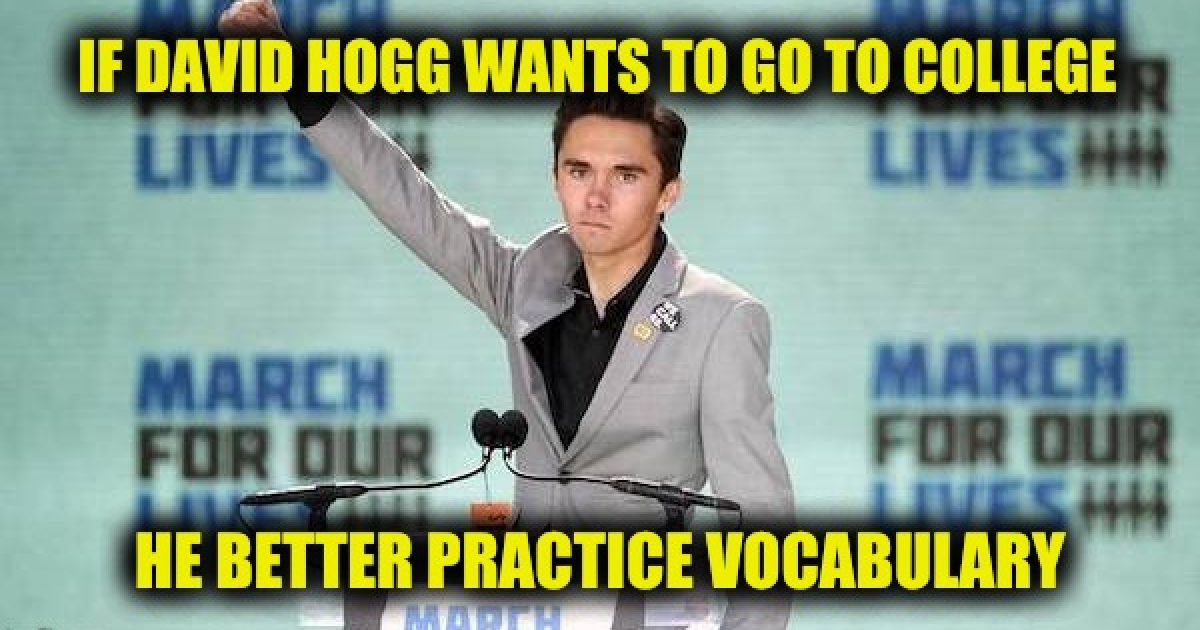 Maybe he skipped vocabulary class. On Friday, David Hogg, the anti-gun teen demagogue once dubbed the “king of the snowflakes” on Twitter, posted a tweet in which he decried “gerrymandering” at colleges across the country, prompting many to wonder if he even knows what the term means.

North Carolina A&T is still the most civically engaged and politically involved college I’ve ever been too.

I asked 300 people if they have voted and only 2 said they hadn’t but had a plan to. I wish that was the story at every college.

And he followed up with a statement declaring: “The gerrymandering on campus is ridiculous tbh”

The gerrymandering on campus is ridiculous tbh

Naturally, pretty much everyone’s heard of gerrymandered congressional districts — districts designed to ensure someone like Sheila Jackson Lee gets re-elected to office for the rest of her natural life no matter what she does or says.

So, how are colleges across America gerrymandered?  We’re not sure, and we’re pretty certain Hogg isn’t sure, either.

Reaction on Twitter was pretty much what you’d expect, harsh but well deserved.

As if it weren’t bad enough that this dope goes around bloviating (Google it David) about guns and gun laws he doesn’t understand, now he’s talking about elections without understanding anything about that either. pic.twitter.com/mTcrczQZFX

You should learn what gerrymandering is, moron.

I gerrymandered my Pork Carnitas before it went in the cooker. It really helps with the flavor.

So, about this “gerrymandering”… pic.twitter.com/BVL0QA5a1q

perhaps you’ll be able to go to college one day

Perhaps he should go back to high school and retake civics first.

How exactly does one “gerrymander” a college campus? https://t.co/eSl3C4YDpj

Comments like Hogg’s, by the way, remind us of the reason leftists are often called “low-information.”