Wolf Blitzer Vs. Ken Burns, On The Holocaust 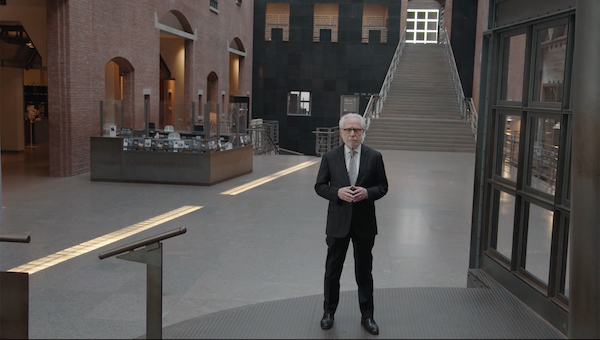 Has Wolf Blitzer’s father just pulled the rug out from under filmmaker Ken Burns?

Testimony from the late David Blitzer about his experiences in Auschwitz was featured in CNN’s August 26 special about the Holocaust, hosted by his son, anchorman Wolf Blitzer. Among other things, the elder Blitzer denounced the Roosevelt administration’s refusal to bomb the railways leading to Auschwitz.

The airing of the Blitzer testimony comes just weeks before the PBS broadcast of a new documentary film by Ken Burns about America’s response to the Holocaust. In recent interviews, Burns minimized the Roosevelt administration’s abandonment of the Jews and suggested there was not much the U.S. could have done to rescue Jews from Hitler.

Wolf Blitzer himself has written (in the Wall Street Journal in 1985) of what he called “the documented abandonment of European Jewish refugees before and during World War II.” And now the powerful testimony of his father has cut through all the excuses and rationalizations:

“The biggest puzzle for me is that they did not bombard the railroads leading to the crematoria. This is the biggest puzzle. We saw the airplanes—in 1944, we saw airplanes bombarding cities. We were laughing, we were happy, we were even praying to God—we could get killed by those bombs, but we couldn’t understand why they did not bombard—every day, thousands of people were burned and gassed in the camps, only because they had the possibility to bring those trainloads of people. If those rails had been bombarded, they couldn’t have done it so perfectly.”

In just a few sentences, the elder Blitzer reminded us of three key aspects of the bombing issue:

First, bombing the railroads and bridges leading to the camp would have disrupted the mass murder process. Hundreds of thousands of Hungarian Jews were deported along those routes in the spring and summer of 1944. Twelve thousand were being gassed daily in Auschwitz. Damaged railways took time to repair—and damaged bridges took even longer. Every delay in the deportations—whether for hours or days—would have saved lives.

Those who today excuse the failure to bomb Auschwitz because prisoners might have been harmed ignore that hitting the railways and bridges would not have involved a risk of civilian casualties.

Second, American planes were already flying in the area—bombing German oil factories in the industrial section of Auschwitz, just a few miles from the gas chambers. At the time, Roosevelt administration officials falsely claimed they would have to “divert” planes from distant battle zones if they wanted to hit Auschwitz. But as David Blitzer said in his testimony, “we saw planes bombarding” the region. He was probably referring to the American planes bombing the oil factories since those raids were close enough for Blitzer and other prisoners to have witnessed them.

George McGovern was one of the pilots. The future U.S. senator and 1972 Democratic presidential nominee flew a B-24 Liberator bomber in World War II and took part in the 1944 strikes on the Auschwitz oil sites. “There is no question we should have attempted…to go after Auschwitz,” McGovern said in a later interview. “There was a pretty good chance we could have blasted those rail lines off the face of the earth, which would have interrupted the flow of people to those death chambers, and we had a pretty good chance of knocking out those gas ovens.”

Third, as Blitzer said, the prisoners themselves were “praying” for the Allies to bomb the gas chambers and crematoria in Auschwitz, despite the risk that Jews might be harmed because they knew the prisoners were doomed anyway and hoped something would be done to disrupt the mass-murder machinery.

Elie Wiesel was a slave laborer in those oil factories. In his famous book, Night, he described the prisoners’ reaction when U.S. bombers struck on August 20, 1944: “We were not afraid.

And yet, if a bomb had fallen on the blocks [the prisoners’
barracks], it alone would have claimed hundreds of victims on the spot. But we were no longer afraid of death; at any rate, not of that death. Every bomb that exploded filled us with joy and gave us new confidence in life. The raid lasted over an hour. If it could only have lasted ten times ten hours!”

The Roosevelt administration’s decision to refrain from bombing the gas chambers and crematoria had nothing to do with concern about harming prisoners. The U.S. policy was based on the principle that military resources should not be used for humanitarian purposes.

This principle was established before there were any requests for bombing Auschwitz and without reference to the issue of civilian casualties.

The planes were sent to bomb the Auschwitz oil factories in broad daylight when it was likely the sites would be filled with Jewish slave laborers. As Martin Gilbert notes in his book Auschwitz and the Allies, forty Jews were killed in the U.S. bombing of the oil targets on September 13, 1944; thirty more were killed by stray bombs in that day’s raid. But that didn’t deter the Roosevelt administration from carrying out additional attacks.

Likewise, U.S. planes were sent to bomb a rocket factory in the Buchenwald concentration camp on August 24, 1944. They struck in the early afternoon when there was every reason to believe Jewish prisoners would be working there. Over three hundred prisoners were among those killed by the American bombers. The Roosevelt administration considered that to be a price worth paying in order to hit that military target.

The original interview with David Blitzer was conducted by the American Gathering of Jewish Holocaust Survivors on April 13, 1983. We are all indebted to those who have conducted oral history interviews with Holocaust survivors over the past several decades.

Every time some partisan tries to distort the historical record, we can turn to an actual witness, such as the late David Blitzer, to remind us of the painful truth about the Roosevelt administration and the bombing of Auschwitz.