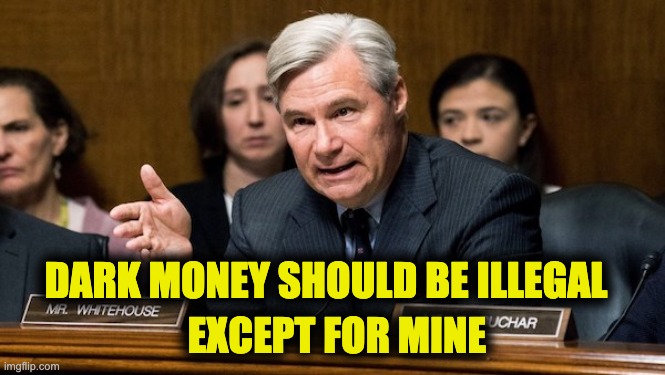 At one of Amy Coney Barrett’s judicial confirmation hearings, Sen. Sheldon Whitehouse (D-RI) thoroughly beclowned himself. Rather than use his 30 minutes to question the Supreme Court nominee, Whitehouse chose to go on a tirade about the Koch brothers (one of whom is already deceased) and dark money on the right. For those unfamiliar with the term, dark money is money given to nonprofit groups that spend it on political campaigns without disclosing who the donors are. Conveniently, the Democrat senator ignored dark money on the left – of which there is plenty.

In his rant, Whitehouse spun a wild conspiracy that the right is buying the courts. The only thing missing from Whitehouse’s speech was his tinfoil hat. Nor is this the first time he has blathered on conservative dark money; for some unknown reason, it seems to be a pet issue for him.

The problem with Whitehouse’s portrayal of a conservative conspiracy to seize the courts is that there is no conspiracy. Conservatives have long been clear that they oppose liberal activist judges who seek to legislate from the bench and impose their personal policy preferences on the country. Simultaneously, conservatives have called for the appointment of strict constructionist judges who will follow the Constitution and the law. Republican candidates for Senate and the White House have run and won to confirm and nominate conservative judges for years.

There are several reasons why Whitehouse should pipe down. One might think that a senator from the Party of Woke who belonged to an exclusive, all-white Rhode Island club might want to keep a low profile, but Whitehouse seems to have calculated otherwise – and has thus far gotten away with it. Furthermore, on the specific issue of conservative dark money, Whitehouse would be wise to listen more and talk less.

Whitehouse would have us believe that he is some hero for standing up to conservatives on the issue of dark money, but the truth is otherwise. The fact of the matter is that it is easy for an entrenched incumbent Senator from a small blue state to denounce dark money because he does not need to raise much money to win. The state is so strongly Democrat that it has not voted for a Republican presidential candidate since 1984. Its entire Congressional delegation is made up of Democrats – and it has been for nearly 14 years. Along with having one of the smallest state populations, Rhode Island is the smallest geographically. In fact, Rhode Island is so small that, out of more than 40,000 zip codes in the United States, Rhode Island has just 28.

The next time you hear Sheldon Whitehouse or some other Democrat bloviating about dark money, just remember a couple of things. Because of the left’s harassment, there are good reasons why donors would be hesitant to publicly support conservative causes, and Democrats love their own dark money – or else they would not be able to raise so much of it.