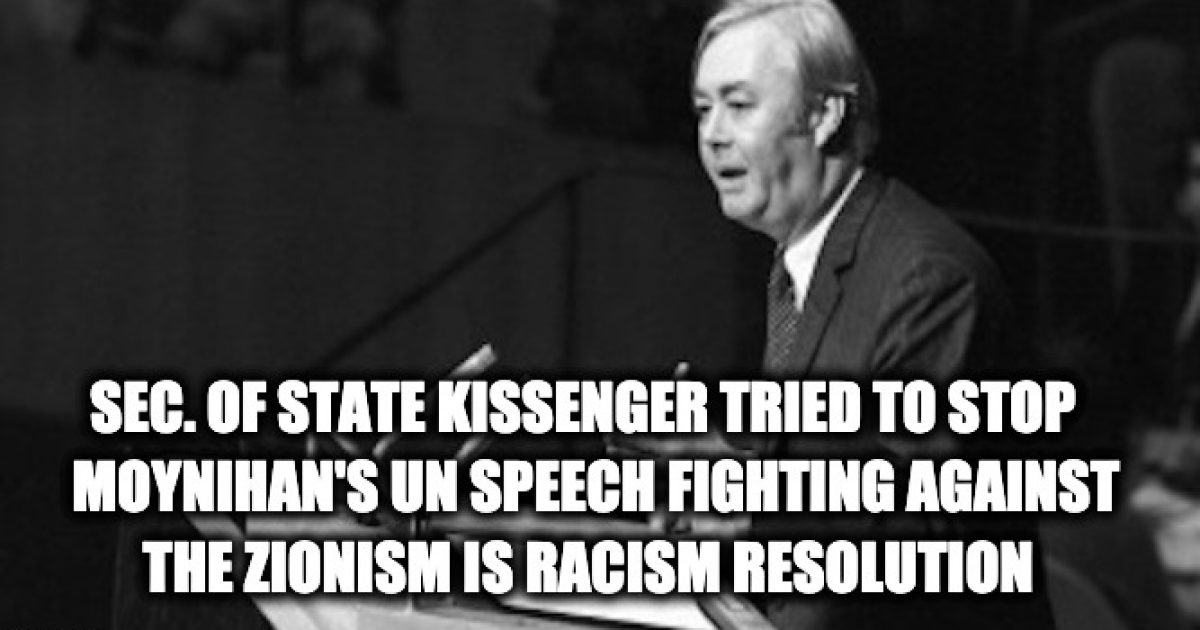 The Jewish Leadership Conference has invited Henry Kissinger to be a featured speaker at its November conference in New York. That Kissinger was invited to speak at the “Jews And Conservatism 3rd Annual Conference” is especially alarming because we now know that while Ambassador Daniel Patrick Moynihan was fighting against the notorious Zionism-Is-Racism resolution at the United Nations, Kissinger was battling against Moynihan. The ongoing question of Kissinger’s record on Israel and Jewish affairs should have precluded his selection as speaker, but his behind-the-scenes fight against Moynihan, especially considering the explosive growth of support for BDS, which utilizes the racism charge to legitimize its anti-Israel crusade, should leave no question that the Jewish Leadership Conference has seriously erred.

Kissinger’s war against Moynihan is detailed in Prof. Gil Troy’s book, “Moynihan’s Moment, America’s Fight Against Zionism as Racism.” A professor of history at McGill University, Troy is a political centrist, a widely-respected commentator on Jewish affairs and scholarship. Troy keynoted the American Zionist Movement’s Biennial Assembly in March 2019. Kissinger’s pressure on Israel not to strike first on the eve of the Yom Kippur War is well known. So are his ten-day stalling of U.S. arms shipments so that Israel would be—as he put it— “a little bloodied,” his cut-off of U.S. weapons to Israel during the “reassessment” in 1975, and his relentless campaign to undermine Soviet Jewry and the Jackson Amendment.

But, Troy’s book focuses on Moynihan’s famous speech at the UN against the “Zionism Is Racism” resolution. As Troy’s chronicle proceeds, it quickly becomes apparent that Kissinger tried everything he could to prevent that historic speech from ever being made. The speech was the most important defense Zionism ever made by an American statesman.

Citing the transcripts of Kissinger’s telephone conversations with his aides and other internal documents from the period, Prof. Troy finds that the secretary of state was “a conflicted Jew” whose response to the casual anti-Semitism in the White House was disturbing, to put it mildly. “As both courtier and careerist, Kissinger absorbed the anti-Semitism around him and encouraged it, to prove his independence from his ‘co-religionists’,” Troy writes. (pages 35-36).

In a subsequent essay for Tablet, Prof. Troy elaborated on this point. “Kissinger distanced himself from his Jewish roots with damning wisecracks,” Troy wrote. “ ‘If it were not for the accident of my birth, I would be anti-Semitic,’ he once quipped, and ‘any people who has been persecuted for two thousand years must be doing something wrong.’”

If any other U.S. secretary of state had made those kinds of remarks, he would be widely condemned as an anti-Semite. Indeed, that was the case with James “F— the Jews” Baker. Does the fact that Kissinger is Jewish absolve him of being labeled anti-Semitic?

Troy describes how, after the Zionism-Is-Racism slur passed a preliminary UN committee, Moynihan proposed that Kissinger condemn it in a toast that the secretary was scheduled to deliver at a UN event. Kissinger and his aides would have none of it. They scrubbed the terms “horror,” “evil,” and similar language from Moynihan’s draft. Kissinger was not particularly horrified by the imminent UN vote, but he was certainly horrified by Moynihan’s planned speech against it. He instructed one of his top aides, William Buffum, to pressure Moynihan to tone down his remarks. “What is wrong with that guy?” Kissinger thundered. “You get him out and tell him I will not stand for that anymore.” (page 136)

To his credit, Moynihan defied Kissinger’s pressure and delivered a speech for the ages. He vigorously defended Zionism as the national liberation movement of the Jewish People and upheld the honor of the United States.

Kissinger couldn’t stand it. “We are conducting foreign policy. This is not a synagogue,” he complained to his aides after Moynihan’s address. (page 33). Troy reveals that it was Kissinger who leaked a story to Newsweek that “Kissinger raked Moynihan over the coals” after the speech. (page 155)

Kissinger was a master of dirty tricks and did not hesitate to use them against his political enemies, according to Troy. “Rumors fed by Kissinger began circulating that Moynihan was grandstanding to New York Jews to run for Senate in 1976,” he notes. (page 155).

In fact, Prof. Troy points out, Moynihan at that time had no intention of running for office. But wouldn’t it be ironic if it was Kissinger’s vicious smear that planted the idea in Moynihan’s mind?

Pat Moynihan stood up for the Jews. Henry Kissinger tried to knock him down. That must not be forgotten.

Friends of Israel strongly objected to the invitation by J Street to James Baker to speak at its annual conference several years ago. We should object just as forcefully to this wrong-headed invitation to Kissinger. Kissinger’s presentation is entitled “Modern Statesmanship: Why Leaders Matter.” What does matter is Kissinger’s on Israel and Jewish affairs — it’s deserving of condemnation, not honor.

Moshe Phillips is the national director of Herut North America’s U.S. division; Herut is an international movement for Zionist pride and education and is dedicated to the ideals of pre-World War Two Zionist leader Ze’ev Jabotinsky. Herut’s website is https://herutna.org/
Below is the Audio of Daniel Patrick Moynihan’s great speech to the United Nations General Assembly that was hated by Henry Kissinger.
Daniel Patrick Moynihan
Daniel Patrick Moynihan
Facebook Twitter Flipboard