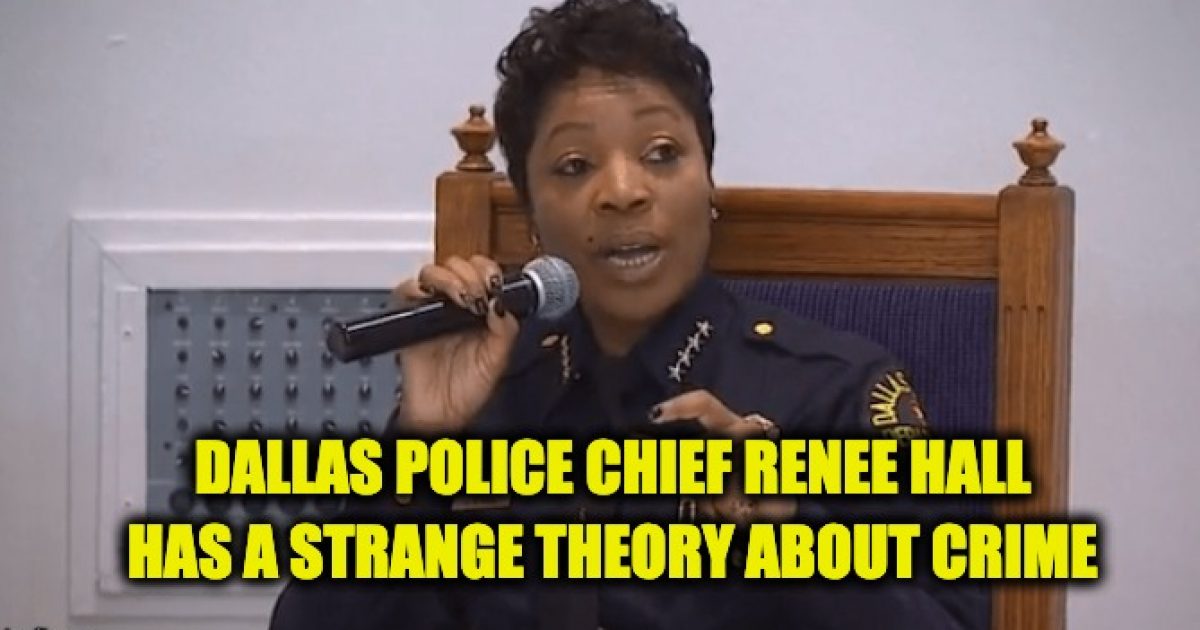 The Dallas, Texas Police Chief, Renee Hall, took criticism this week after she claimed that violent felons are “forced to commit violent acts” by society.

That’s right, folks, the Dallas police chief is blaming all of us for the violence of repeat offenders. It isn’t the criminals’ fault, it’s YOURS, America.

The chief’s comments came as she was speaking about two recent homicide cases. The homicides were not the fault of those who committed them, she said.

“There are individuals in this city who have returned from prison who cannot find a job, who are not educated. In those instances, those individuals are forced to commit violent acts,” Dallas Police Chief Renee Hall said.

Here is video of Dallas Police Chief Renee Hall addressing the rise in violent crime and making the controversial comment that’s generating a lot of reaction since I first posted about it earlier today. pic.twitter.com/SM9lSsoUhC

So, because the inner-city black culture is built on an idea that thoroughly excuses breaking the law because it is suffused with finger pointing and a lack of accountability, it is everyone else’s fault that they turn into killers?

Seriously? THAT is her argument?

According to CBS, Dallas-Fort Worth, not many local police agree with the chief’s idiotic statement.

Her statement, which suggests that criminal records and lack of education force people to commit violent crimes outraged many.

Those speaking out include the head of the Dallas Police Association, Mike Mata, who sent CBS a statement:

By saying people who are ex-offenders “choose to commit violent acts” places the blame on the offender but still eludes to their criminal past being an excuse.

The Chief saying that people “forced to commit violent acts” it places the blame on society and makes the offenders the victim. I don’t believe anyone is forced to violently attack another person.

I believe in sentencing guidelines reform and educating violators prior to releasing back into society so they can have the best possible chance of not re-offending but we also have to be accountable for our own actions and never in any way validate an excuse to commit a violent act.

The Dallas chapter of the National Latino Law Enforcement Organization says the department’s personnel problems are a result of low morale and that Chief Hall needs to go.

NLLEO said more than 1,000 Dallas police officers participated in a survey about Chief Hall. It concluded that 83 percent of them said they had no confidence in the chief.

But with all the criticism, Chief Hall tried to “clarify” her comment, but only really ended up doubling down:

Today point was simple — there is no excuse for crime. Crime in general however, is on the rise in Dallas for many reasons. One of them being a lack of resources and opportunity. In no way, am I using that as an excuse to commit a crime. However, we have to work together as a community to remain vigilant and pro-active. I’ve asked our pastoral community, as a beginning, to develop ways to teach people how to resolve disputes without violence and find opportunities without resorting to crime

Not much of a clarification, is it? On the one hand, she says there is no excuse for crime, but then proceeds to restate her original point that it is America’s fault for not giving these criminals enough welfare.

Chief Hall’s comments are reminiscent of the song Officer Krupke from West Side Story: