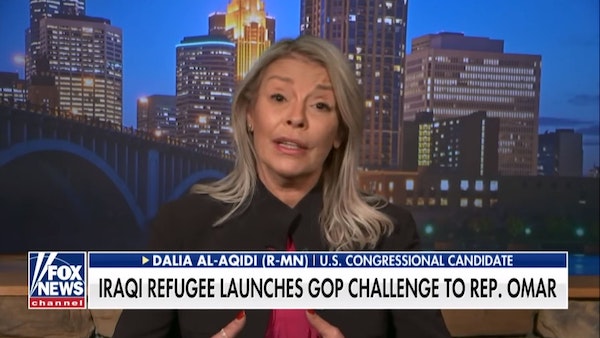 Dalia Al-Aqidi has a personal story similar to Ilhan Omar, but with a very different focus: instead of hating America and President Trump, she says she stands with him and the country. And she feels that Ilhan Omar has been causing division – irreparable harm to America. She announced her candidacy for Omar’s Minnesota district on Thursday.

“She needs to be stopped,” al-Aqidi told Fox News in a phone interview. “I truly believe that I’m strong enough to beat her at her own game.”

Dalia was a refugee from Iraq – her family fled the country from the tyrannical rule of Saddam Hussein. She became an American citizen and went to school for journalism. Her journey took her not just to war zones, but to the White House under the George Bush presidency. Still, she knew where her roots were- she fled tyranny before, and she wasn’t about to let it happen to her adopted country. And now…Ilhan Omar.

Dalia is not the only Republican challenger to Omar. Republican Danielle Stella had her Twitter account permanently suspended when she posted things Twitter didn’t like after announcing her run for the seat. The media AND Omar accused her of smears and violence and gleefully said that her “anti-Islamic dog whistle” would just add to the division.  It will be interesting to see how the media treats Dalia al-Aqidi.

Dalia is much different: they both come from Muslim families, both were refugees. But Dalia is GRATEFUL to her adoptive nation. Omar is not and never has been.

So she is launching a campaign to unseat her in November.https://t.co/PVSCE5JBzE

The Daily Wire interviewed Dalia- here are some of her responses:

“I chose to run for Congress because I believe Ilhan Omar is doing irreparable harm to both Minnesota and the U.S.—she must be stopped. Her consistent anti-Semitism and hateful rhetoric are toxic and serve only to gain attention for herself and position herself as a celebrity—she’s not fighting for us; she is fighting for herself, even if that means fighting against us. I was inspired to launch my campaign because I believe the residents of this district need someone fighting for them, not DC insiders and foreign influences, and our country needs leaders who believe in America, not condone it at every step…”

“…I believe I am uniquely qualified to take her on because we come from similar backgrounds—we’re both Muslims, women, and refugees. That being said, we couldn’t be more different. I have used my life experience to expose oppression and boost the U.S. while Omar has done the opposite—stoking fear, inspiring hatred, inciting violence, and embarrassing the U.S….

“My family was forced to leave everything behind because of a brutal dictatorship. As a journalist overseas trying to expose the atrocities happening in the Middle East, I gained a unique perspective on how the two parties viewed what was happening over there. However, the left-wing is much worse today than it has ever been. They’re inspired by hatred, self-interest, and a desire to fundamentally change the American way of life. I’ve seen this world once and was lucky enough to escape it. I will not let it happen here in the U.S. I am so grateful to the U.S. for the life and opportunities it has given me…”

We will see if this challenger can unseat Ilhan Omar. To all the candidates who are running against Omar, we hope for success.