D-Day’s 75th Anniversary: The Invasion That Saved The World From Tyranny 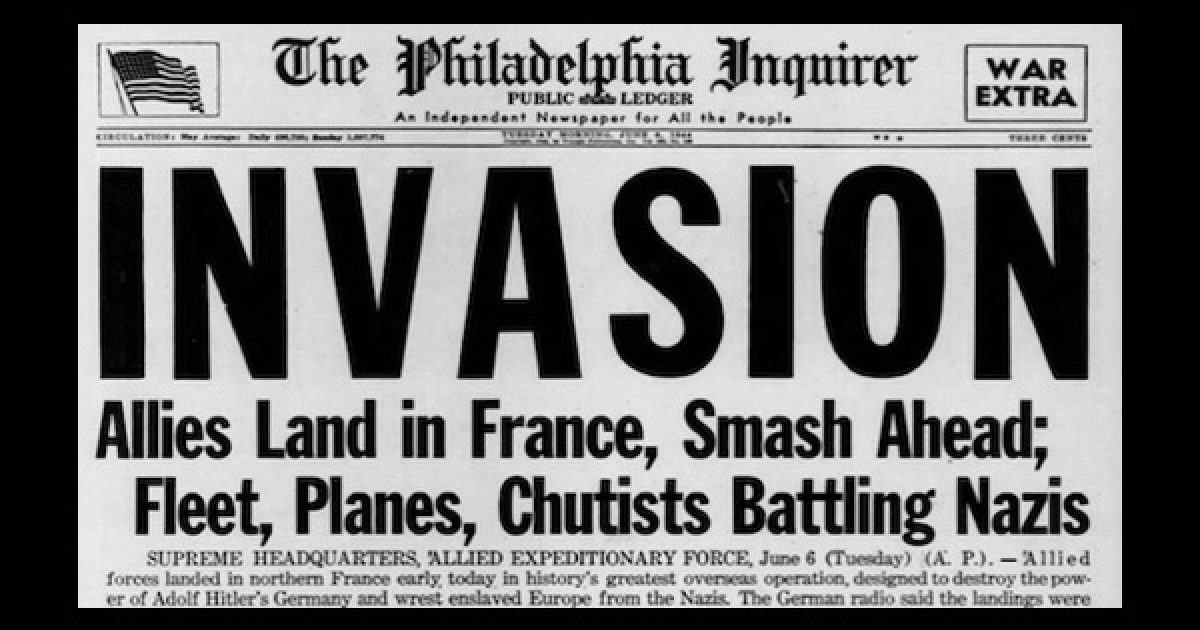 Facebook Twitter Flipboard
June 6, 2019, is the 75th Anniversary of D-Day, the Allied invasion of Normandy that saved the world from Nazi tyranny.

On June 6, 1944, more than 160,000 Allied troops landed along a 50-mile stretch of the heavily-fortified French coastline, to fight Nazi Germany on the beaches of Normandy, France. Codenamed Operation Overlord, Gen. Dwight D. Eisenhower called the operation a crusade in which, “we will accept nothing less than full victory.”

Rommel was very wrong. On June 6th, more than 5,000 Ships and 13,000 aircraft supported the D-Day invasion, and by day’s end, the Allies gained a foothold in Continental Europe. Within ten days, there were half a million troops ashore, and within three weeks, there were two million.

The invasion was the most massive amphibious military assaults in history and required extensive planning. The cost in lives on D-Day was high. More than 9,000 Allied Soldiers were killed or wounded, but their sacrifice allowed the allies to begin the slow, hard slog across Europe, defeat Adolph Hitler’s troops and save the world from tyranny.

The movies call D-Day “The Longest Day,” but a more apt description would be “The Day That Saved The World From Tyranny.”

D-Day was the reason Gen. Eisenhower was chosen to be Supreme Allied commander in Europe, his logistical skills made him valuable. The invasion at Normandy was a logistical miracle, (getting the men and supplies where they had to be) and Ike was the guy to do it. Even after the landings, from a “war management” standpoint, a crucial part of the operation was keeping the fragile bridgehead supplied so that it could withstand the German counter-attacks.

The most critical part of D-Day, however, were the heroes who fought against a well-fortified German force that had the advantage of higher ground. The Nazis had a superior position, but the allies had a more significant advantage;  the will and determination of the dedicated heroes who were part of the forces that stormed the beaches of Normandy. Many of these young men didn’t leave the Normandy beaches alive, some didn’t even make it to the beaches. But it wasn’t for the sacrifice of those heroes from Britain, Canada, and the United States, the Empire State Building might very well have become the world’s tallest German Schnitzel stand.

General Eisenhower also had a letter prepared case D-Day failed. Demonstrating his exceptional leadership, he placed the entire blame on himself:

That night FDR went on the radio, told America what was happening at Normandy and asked all Americans to join him in prayer:


NOTE: There is no record of the ACLU complaining about FDR offering a prayer.

Reagan’s full speech encapsulated why we needed to fight at Normandy, and why we must fight for freedom every day.

As we remember the D-Day invasion seventy-five years ago and those heroes who saved the world from tyranny, keep in mind these words from FDR’s prayer that were read by President Trump at a D-Day ceremony in Portsmouth, England on June 5th.

God Bless the heroes who saved the world on D-Day and the battles that followed with the help of the Lord.