And This Is The Lesser Of His Two Festering Scandals 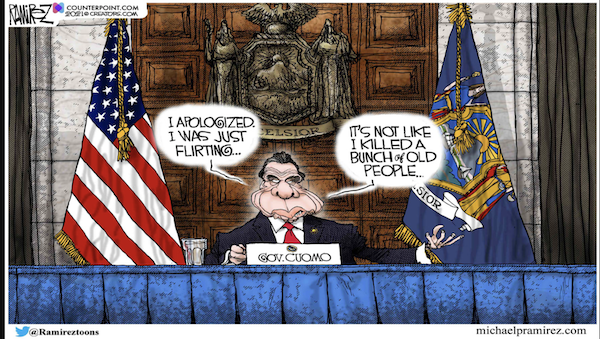 New York Governor Andrew Cuomo should be as good as done.  His political career is dead, but he refuses to allow it to fall down. The Democratic politician is now knee-deep in scandal as a growing number of former aides and acquaintances accuse him of inappropriate and sexually-degrading behavior. And that’s on top of the nursing home scandal where thousands of seniors died, while the gov. was covering up the cause.  Cuomo’s troubles multiply

And, worst of all, the list of women who are courageously willing to tell their stories about the harassment inflicted upon them by the Governor continues to grow.  Two more former aides bravely told their stories about Cuomo’s sexual harassment on Saturday: Karen Hinton who worked for Cuomo when he was in the Clinton Administration, and Ana Liss who was a Cuomo aide during his first term as NY Governor.

A former press aide to the governor, Karen Hinton, told The Washington Post that Cuomo summoned her to his “dimly lit” hotel room and embraced her twice after a work event in 2000.

Hinton said she pulled away from Cuomo and he pulled her back toward his body, holding her in embrace before she backed out of the room.

The accusation kicked off some heated exchanges between lawyers.

Peter Ajemian, Cuomo’s director of communications, aggressively denied the allegations in a statement to Fox News.

“This did not happen,” he said. “Karen Hinton is a known antagonist of the Governor’s who is attempting to take advantage of this moment to score cheap points with made up allegations from 21 years ago. All women have the right to come forward and tell their story — however, it’s also the responsibility of the press to consider self-motivation. This is reckless.”

In response to the Cuomo office’s denial, Hinton said “attacking the accuser is the classic playbook of powerful men trying to protect themselves.”

Ana Liss also bravely told her story on Saturday, served as a policy and operations aide to Mr. Cuomo between 2013 and 2015. She said the actions by Mr. Cuomo were unsolicited and occurred in the first year while she sat at her desk, which was near his office in the Executive Chamber of the New York State Capitol in Albany.

On Sunday she thanked those who sent her messages of support.

Thank you to those of you who have reached out with messages of support. I shared my story because I believe it may help bolster those shared by other women. This is just "how things are" for women in Albany, in politics, in any high-pressure workplace. I think we deserve better. https://t.co/XDj8mcLuir

Unbelievably Cuomo has refused to resign in the face of these allegations:

“I was elected by the people of the state,” Cuomo said, responding in a conference call with reporters to the newest allegations against him. “I’m not going to resign because of allegations. There is no way I resign.”

Cuomo 2018: "My personal opinion is that… it is impossible for Eric Schneiderman to continue to serve as Attorney General, and for the good of the office he should resign."

Cuomo 2021: "the premise of resigning because of allegations is actually undemocratic."

Incredibly the Andrew Cuomo sexual harassment scandal is horrible but it is the lesser of his two festering scandals. As this was pointed out by the great Michael Rameriz in the cartoon above. His executive order forcing sick seniors into nursing homes resulted in thousands of COVID deaths, and then he lied about it to New Yorkers and the Feds.