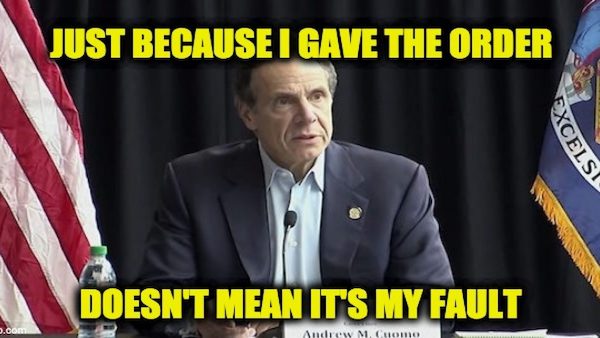 What happened to celebrating the “brave” front-line healthcare workers that were putting their lives on the line? Cuomo’s agency cleared Cuomo

Apparently, they can be tossed under the bus now that Governor Andrew Cuomo(D-NY) is in the crosshairs for his disastrous policy that caused unnecessary deaths.

New York hospitals released more than 6,300 recovering coronavirus patients into nursing homes during the height of the pandemic under a controversial, now-scrapped policy, state officials said Monday, but they argued it was not to blame for one of the nation’s highest nursing home death tolls.

Gov. Andrew Cuomo’s administration, which has taken intense criticism over the policy, instead contended the virus’ rampant spread through the state’s nursing homes was propelled by more than 20,000 infected home staffers, many of whom kept going to work unaware they had the virus in March and April. Another 17,500 workers were infected through early June.

“Facts matter. And those are the facts,” state Health Commissioner Dr. Howard Zucker said in a news conference.

If you can’t trust Cuomo’s people to honestly evaluate Cuomo—who can you trust?

The New York Times reports that 43% of COVID deaths in the United States were connected to nursing homes. The article states that 54,000 residents and staff of nursing homes, assisted living, and long-term care facilities have died from the coronavirus.

The Cuomo administration is now saying that asymptomatic healthcare workers are to blame and not the thousands of COVID-positive patients that were forced back into those nursing homes by the Governor’s March 25 order.

There’s still confusion about whether or not asymptomatic carriers of COVID-19 are spreading the virus or not. In June, a WHO official said that asymptomatic spread is “rare” but that was quickly backtracked. So, do they or don’t they? Who can possibly know at this point?

What we do know as a fact is that thousands of COVID-positive patients were sent to nursing homes while the emergency hospitals were largely empty. Cuomo’s agency cleared Cuomo

The Lid has covered Governor Cuomo’s failures during the pandemic extensively. Here are some examples: