It's The Old People's Fault-NO, Trump Made Me Do It. 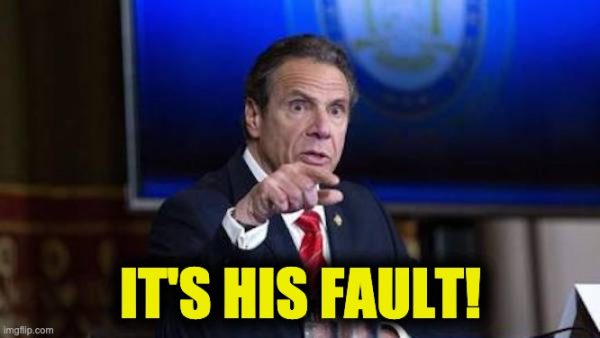 The Democrats and their minions in the news media are desperately seeking lies to allow them to blame the China Virus on President Trump.  Andrew Cuomo, the far-left governor of NY State, who shares a brain with his brother Chris, created a unique falsehood tho transfer blame to the POTUS.  On March 25, 2020, he issued an order directing nursing homes to take in patients that already had the highly contagious coronavirus. “No resident shall be ­denied readmission or admission to NH solely based on a confirmed or suspected diagnosis of COVID-19,” then failed to reverse the directive for six weeks as deaths mounted. Cuomo won’t accept blame

Usually confirmed or suspected cases of the Wuhan Virus would have otherwise been sent to Hospitals. Thanks to the Cuomo order, those cases were sent to nursing homes and infected other patients, leading to a nursing home death toll approaching 6,000. First he blamed the deaths on the old people themselves. But he changed his mind, now, even though he independently gave the order, Cuomo says that President Trump made him do it.

The governor’s office said New York’s original nursing home policy was in line with a March 13 directive from the Trump Administration’s Centers for Medicare & Medicaid Services (CMS) and Centers from Disease Control and Prevention (CDC) that went out to all states on how to control infections in nursing homes. The guidance says “nursing homes should admit any individuals that they would normally admit to their facility, including individuals from hospitals where a case of COVID-19 was/is present.”

“Not could. Should,” Melissa DeRosa, secretary to the governor and Cuomo’s top aide, said at the Saturday press conference. “That is President Trump’s CMS and CDC…There are over a dozen states that did the exact same thing.”

Firstly the CDC issued guidance, not an order. The President and VP made it clear that ultimately things are a state decision. More importantly, Ms. DeRosa left out this part of the guidance “that they would normally admit to their facility, including individuals from hospitals where a case of COVID-19 was/is present.” They wouldn’t usually admit people with the virus, which was a Cuomo enhancement or even people who might have been in a hospital where a case of Covid-19 was present if the facility did not have the equipment or the staff to handle those patients, that was another Cuomo addition.

My friend Rusty Weis said on his site The Mental Recession:

This man, who has done everything the exact opposite as Trump for three years now, suddenly wants you to believe he listened to the President’s advice.

Interestingly earlier in the week Cuomo had a different excuse,

That was different from his excuses earlier in the week when he basically said, hey old people are going to die,

“What would you say to families who have suffered losses inside nursing homes?” one reporter asked the Democrat governor. “And they’re looking for accountability. And they’d like to see justice.”

In an incredibly cold and callous reply, Cuomo snapped at the reporter for asking about grieving families seeking justice, insisting “nobody” would be prosecuted for the nursing home deaths.

“What is justice? Who can we prosecute for those deaths? Nobody. Nobody,” he rationalized. “Mother nature? God? Where did this virus come from? People are going to die by this virus.”

In other words, his earlier excuse was, hey old people are going to die.

On March 26, the day after his order, a letter to the WSJ and a phone call to the Mark Levin Show by a nursing home administrator in New York strenuously protested Cuomo’s new order that obligated nursing homes to accept infectious coronavirus patients into their care. Gov Cuomo later dismissed any objections to his March 25 order as financially motivated in his press conferences. Financially motivated? People didn’t want to pay for Grandma’s funeral????

Give it another week or so, and Cuomo will blame his order on former Jet’s QB Mark Sanchez’s butt-fumble in 2012. That’s unless he becomes a man and takes credit for a disastrous order that he may have made because he thought it would help people but turned out to cause thousands of deaths.