The War Between New York Leftists

Cuomo Vs DeBlasio is New York's version of Godzilla vs. King Kong 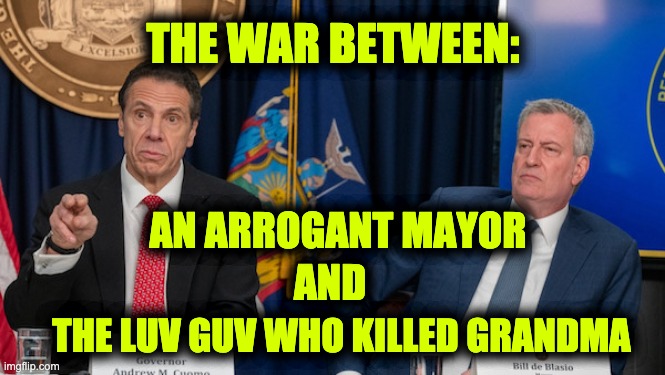 NY State Governor Andrew Cuomo and New York City Mayor Bill DeBlasio are leftist New York’s version of Godzilla vs. King Kong. They have been fighting ever since DeBlasio was elected mayor. City Mayors and NY Governors never really get along, but with these two, it’s war.  Each has an inflated ego, and each acts like a monster toward anyone who dares to disagree with their policies. Thus, the two have been engaged in an epic battle to determine which can screw over New York the worst.

Because they are both hellbent on reducing New York City into a massive garbage fire, Cuomo and DeBlasio take turns scapegoating each other (when they aren’t scapegoating others) and stepping on each other’s narratives.

Now they disagree about when New Yorkers can expect their city to finally open up like free states Texas and Florida.

Cuomo isn’t impressed by the fact that DeBlasio wants New York City to be totally opened by July 1st. And is making it very clear that only one guy is calling the shots over COVID in that state, and that’s the Luv Guv himself, Granny-Killer Cuomo.

Word of that exchange got back to De Blasio’s staff. Their answer was just as snarky.

Neidhardt also told an NY1 reporter who asked about Cuomo’s remarks: “I don’t care what a serial sexual harasser and assaulter and someone who covered up the deaths of thousands of people at nursing homes has to say about anything.”

He makes a good point about those deaths, though according to the Luv Guv, it’s all Trump’s fault. Neither of those two leftists ever take credit for their own screw-ups.