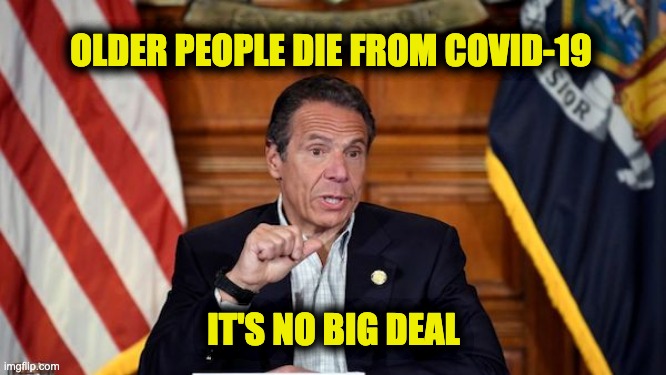 Sounding callous as usual  New York Governor Andrew Cuomo dismissed questions regarding a nursing home scandal in his state, saying “nobody” can be prosecuted for those coronavirus deaths because “older people … are going to die from this crisis.” Cuomo, the far-left governor of NY State, who shares a brain with his brother Chris, is a media darling held up as an example of how to handle the pandemic, despite that he issued an order directing nursing homes to take in patients that had the highly contagious coronavirus that would have otherwise been sent to Hospitals.

Nursing homes cannot deny “readmission or admission sole based on a confirmed or suspected diagnosis of COVID-19” the order from March 25th reads.

Cuomo failed to reverse this directive for six weeks.

It was a curious move, to say the least, considering the most vulnerable population has been the elderly. This particular action contributed to over 5,400 known deaths in New York nursing homes at this time.

“What would you say to families who have suffered losses inside nursing homes?” one reporter asked the Democrat governor. “And they’re looking for accountability. And they’d like to see justice.”