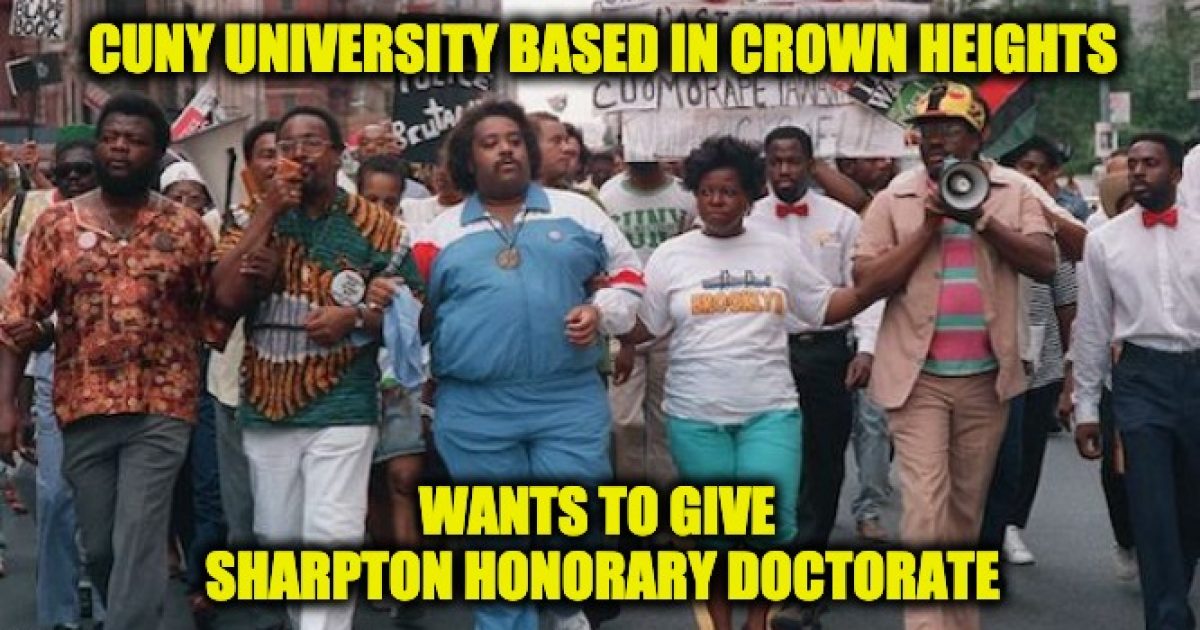 Medgar Evers College, a publicly funded City University of New York (CUNY) school located in the middle of Crown Heights, wants to give an honorary doctorate to Al Sharpton. That’s the same Al Sharpton who was one of the agitators of the 1991 anti-Jewish riot that began only 1.7 miles from the location of the school.

The college, in a resolution to go before a committee Monday, says it wants to recognize Sharpton’s “unwavering commitment to racial, educational and socioeconomic equity” at its June 5 commencement.

Medgar Evers College, in a resolution obtained by The Post attached to the proposed degree, does make note of 1991 as a key year in Sharpton’s history but makes no mention of the riots.

(…) The resolution also omits Sharpton’s tax troubles and his 2017 decision to sell the rights to his life story to NAN, his own nonprofit, bringing him $531,000.

The college cites his Madison Avenue Initiative to push major corporations to spend their ad dollars reaching more minority households. But there is silence on Sharpton’s tactics that have been likened by some to a shakedown as he demands donations to NAN from large companies like General Motors and AT&T in exchange for not protesting against them.

Any public college honoring Al Sharpton is bad, but a publicly-owned college based in Crown Heights where he is famous for inciting violence granting him an honorary doctorate to Sharpton is particularly egregious.

On Monday 8/19/91 a station wagon driven by Yosef Lifsh hit another car and bounced onto the sidewalk at 8:21 p.m. The station wagon was part of a 3-car motorcade carrying the Lubavitcher Rebbe Menachem Schneerson. The Rebbe was in a different car.

When it bounced onto the sidewalk, the station wagon struck two black children, 7-year-old cousins Gavin and Angela Cato who were on the sidewalk. Lifsh immediately got out of his car and tried to help the children–but the gathering crowd started to attack him.

Within minutes, an ambulance from the Hasidic-run ambulance service, and two from the city’s Emergency Medical Service arrived. Also, the gathering crowd became unruly. The police who showed up radioed for backup,  reporting the station wagon’s driver and passengers were being assaulted. Police officer Nona Capace ordered the Hasidic ambulance to remove the battered Yosef Lifsh and his passenger from the scene.

A false rumor began to spread that the Hasidic ambulance crew had ignored the dying black child in favor of treating the Jewish men. This falsehood was later used by Al Sharpton to incite the crowd. Other rumors sprang up Lifsh was intoxicated (breath alcohol test administered by the police proved his sobriety). More falsehoods circulated; Lifsh did not have a valid driver’s license; he went through a red light; the police prevented people including Gavin Cato’s father, from assisting in the rescue. 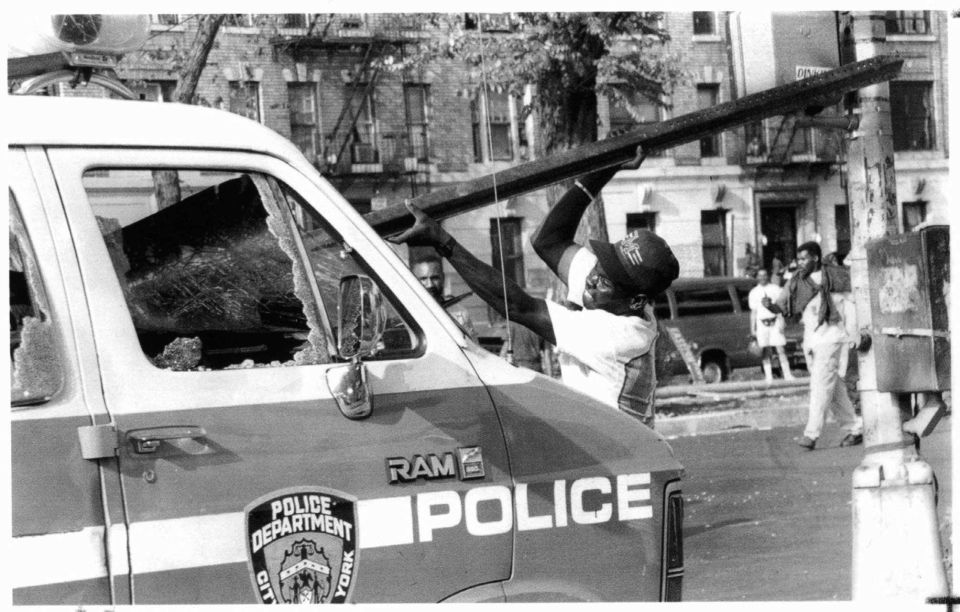 Charles Price, an area resident who had come to the scene of the accident, incited the masses with claims, “The Jews get everything they want. They’re killing our children.” Price later plead guilty for inciting the crowd to murder Yankel Rosenbaum.

Ignited by the falsehoods, resentment exploded into violence. Groups of young black men threw rocks, bottles, and debris at police, residents, and homes. And 29-year-old Australian Jewish scholar Yankel Rosenbaum was attacked by a gang of Black teens. He was stabbed four times and died at approximately 2:30am the next morning.

Despite some claims Al Sharpton had nothing to do with the murder of Yankel Rosenbaum, the tax-dodger/ racial agitator didn’t take over till the second day. On the second day of the riot according to the sworn testimony of Efraim Lipkind, a former, resident of Crown Heights, Sharpton started agitating the crowd.

With each passing hour the violence worsened, Jewish leaders began to desperately complain about the lack of protection to the authorities. They said the rioters were being allowed to rampage unchecked, too little force was being brought to bear, and too few arrests were being made. Area Jews felt the police were under orders by the City’s first black mayor to hold back, that the police were not allowed to fight against the Black rioters, who continued to grow bolder in their anti-Semitic attack as they sensed the appeasement.

For three days following the accident, African and Caribbean Americans of the neighborhood, joined by growing numbers of non-residents, rioted in Crown Heights. A Jew who ventured outside was risking his life, of course being in home easily identifiable as Jewish by a mezuzah on the front door made them targets anyway.

The street violence against the Crown Heights Jews lasted three days/four nights starting with the evening of the accident.  On Thursday evening, cops finally restored order, although sporadic violence against Jews continued for weeks after the riot was contained.

A week after the accident that started it all, at the funeral of Gavin Cato on August 26th, Al Sharpton gave a eulogy which fueled the fires of hatred.

“The world will tell us he was killed by accident. Yes, it was a social accident. ... It’s an accident to allow an apartheid ambulance service in the middle of Crown Heights. … Talk about how Oppenheimer in South Africa sends diamonds straight to Tel Aviv and deals with the diamond merchants right here in Crown Heights. The issue is not anti-Semitism; the issue is apartheid. ... All we want to say is what Jesus said: If you offend one of these little ones, you got to pay for it. No compromise, no meetings, no kaffe klatsch, no skinnin’ and grinnin’. Pay for your deeds.”

A banner was displayed at the funeral that said, “Hitler did not do the job,” not that it mattered to Sharpton.

Sharpton and the lawyer representing the Cato family counseled them not to cooperate with authorities in the investigation and demanded a special prosecutor be named.

Sharpton was asked about the violence, he justified it,

“We must not reprimand our children for outrage, when it is the outrage that was put in them by an oppressive system,” he said.

The first Sabbath after the funeral, Sharpton tried unsuccessfully to kick up tensions again by marching 400 protesters in front of the Lubavitch of Crown Heights shouting “No Justice, No Peace.”

Sharpton called for the arrest of Lifsh, the driver of the station wagon. Even though more than twenty similarly accidental vehicular deaths had occurred in Brooklyn since 1989 without a single arrest. In fact, several of those involved local Hasidim run down by blacks.

The agitator’s pressure led Charles Hynes, the Brooklyn district attorney, into convening a grand jury. When the investigation of the accident did not produce a criminal indictment against Yosef Lifsh, Al Sharpton encouraged the Cato family to seek big-bucks damages in a civil suit against Lifsh (who had since fled to Israel for his own safety). Sharpton announced that he would personally serve papers on Yosef Lifsh in Israel. He bought tickets and hopped an El-Al flight on the weekend of Yom Kippur. At Ben Gurion Airport, a woman spotted Sharpton hailing a cab and yelled at him, “Go to hell! “I am in hell already,” shot back. “I am in Israel.”

Now a publicly funded university based in Crown Heights, that very same Brooklyn neighborhood wants to honor that same agitator with an honorary degree. Does this sound like a man who, as the proposal says, has “unwavering commitment to racial, educational and socioeconomic equity?” I don’t think so.

The Medgar Evers proposal needs to be approved by CUNY’s Committee on Academic Policy, Programs, and Research and then by before the full CUNY board in May.   It is very likely the CUNY board will approve the Sharpton Doctorate. After all, it was only two years ago they approved the anti-American, Antisemitic Linda Sarsour to be CUNY’s commencement speaker.

Norman Rosenbaum, brother of Yankel who was killed the first night of the riot, was aghast that Medgar Evers would pay tribute to Sharpton, who has never acknowledged the mob that accosted his brother as murderers, nor has he ever admitted or apologized for his role in the riots beginning on the second day. Rosenbaum told the NY Post, “This is not a person you honor,” Rosenbaum told The Post from Australia, where he lives. “Within the last 27 years, he hasn’t changed. The same character is there.“I think he’s a fraud and a charlatan whose actions over the years speak for themselves, and they’re not good actions,” Rosenbaum said. “He’s a man who does not promote peace. He’s not told the truth.”

If a Crown Heights-based public university honors Al Sharpton with an honorary degree, what’s next? A statue of Usama Bin Laden on the “footprint” of the twin towers he destroyed?

Rosenbaum is correct. Sharpton is a man who throughout his public career has had an unwavering commitment to racial divisiveness and self-promotion.