Cruz Tells Hewitt: I Have Absolutely Zero Interest In Being Trump’s VP 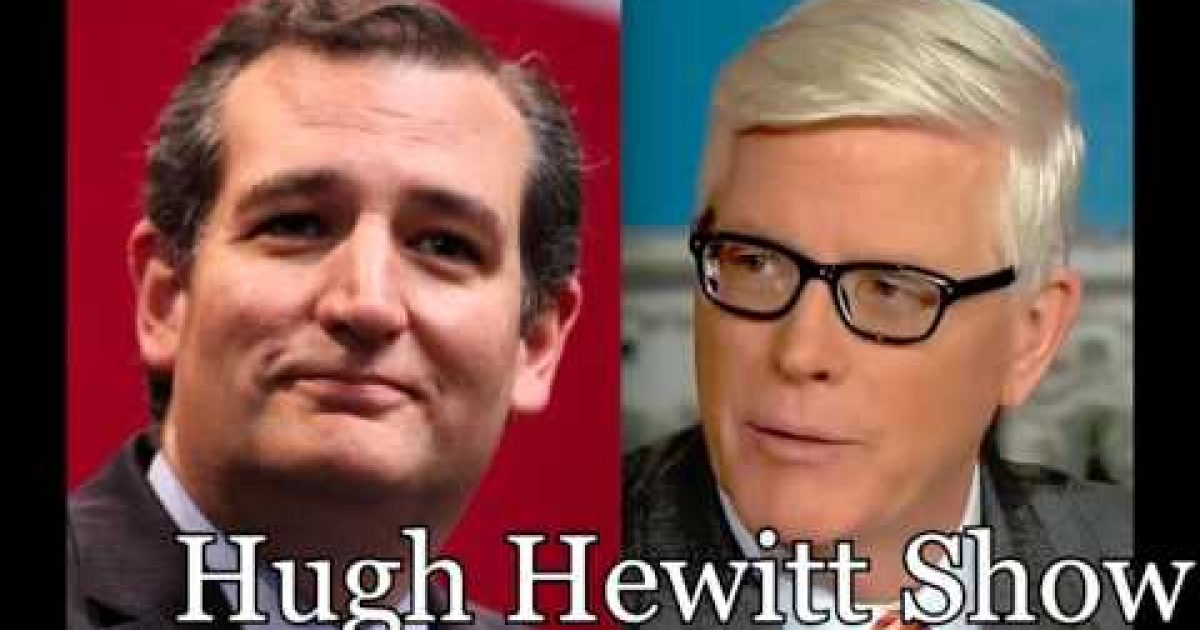 Ted Cruz has zero interest in being Donald Trump’s V.P. choice. At least thats what he said Tuesday evening on the Hugh Hewitt show.You may be thinking “that’s what everyone says,” but it’s not. Usually people say, “that’s premature,” or “I can’t think about it now because I’m running for President.” But Cruz said, “I have absolutely zero interest in doing that. Donald Trump loses to Hillary,” an accurate description.

That’s not all Cruz said, below is a video and transcript of the interview:

Hewitt: Pleased to welcome now United States Senate Ted Cruz. Senator Cruz, welcome back to the Hugh Hewitt Show on Election Day. I know you’re hoping for big wins in North Carolina, Missouri, Illinois. You’re competing hard in Florida and Ohio as well, but those are your win states, North Carolina, Missouri and Illinois. And I think I’m a little bit surprised by how close it is in Illinois. Why have you got traction there in the land of Lincoln?

Cruz: Well, I’ll tell you, we’re seeing tremendous enthusiasm on the ground. Yesterday, I spent all day in Illinois. We had five rallies all over the state, had standing room only crowds everywhere we went. And I think people are energized, they’re excited. What we’re seeing in Illinois is the same thing we’re seeing in Missouri. It’s the same thing we’re seeing in North Carolina. And I’ll tell you, we’re surging in Ohio and Florida as well. And it’s because Republicans are uniting behind our campaign. 65-70% of Republicans recognize that Donald Trump is not the best candidate to go head to head with Hillary Clinton, that Donald Trump loses to Hillary Clinton.

Hewitt: You said earlier today, I was listening to you with Sean Hannity, that he would be a disaster. Why

Cruz: Yeah. Well, number one, he’d be a disaster, because he gets killed. Every poll that gets done over and over again, the polls show that Hillary just obliterates Donald Trump. Over 60% of Americans say they’d never vote for Donald Trump. And there’s a reason the mainstream media desperately wants Donald Trump to be our nominee, why they’ve given hundreds of millions, if not billions of dollars of free advertising, because the network execs are all liberal partisan Democrats. They’re all ready for Hillary. And they recognize that Donald Trump may be the only person on the planet that Hillary Clinton can beat in the general election. So they cover him saturation, wall-to-wall. If you turn on your TV, Donald Trump, I promise you, is on every station right now. And it’s essentially a 24 hour infomercial for Donald Trump. All of that ends once he’s the nominee, by the way. Then, they turn their cannons to attacking him 24 hours a day, and that’s how you get Hillary Clinton That’s how we lose the Supreme Court for a generation. It’s how we bury our kids in debt.

Hewitt: Have you seen the superPAC ad using Donald Trump’s own words spoken by women about women? Have you seen it, Senator Cruz?

Cruz: I have. It is devastating, I think.

Hewitt: All right, so having that background, those vulnerabilities, and given the extremely negative, harsh, and I believe untrue things that Donald Trump has said about you, would you ever agree to serve as his vice president on a ticket?

Cruz: I have absolutely zero interest in doing that. Donald Trump loses to Hillary, and the answer, as you know, Hugh, a lot of folks in the Washington establishment, they’re having fevered dreams right now of wanting a brokered convention.

Hewitt: Well, I’m one of those. I don’t want it. I just predict it as inevitable. So it’s not feverish, it’s math.

Hewitt: Let me ask you, Senator, if you arrive in Cleveland, and I really want an answer on this.

Hewitt: …because I want my people to be honestly informed. If you arrive in Cleveland with 900, and Donald has 1,100 is it legitimate for the convention to pick you as the Republican of long-standing, supported by the majority of delegates on the second ballot?

Cruz: Oh, look, there’s a big difference between a brokered convention and a contested convention. A brokered convention is the convention is deadlocked, and the Washington dealmakers parachute in their white horse salvation who wasn’t on the ballot, who the people never selected, and yeah, we get the establishment choice. I think if they tried that, it would be an absolute catastrophe. The people would revolt, and quite rightly. That’s very different from a contested convention. As you know, we had one in ’76 between Reagan and Ford. Look, I believe we’re going to beat Donald Trump, and I’m going to get 1,237 delegates. But the other option is that we go into the convention, and I don’t have 1,237 delegates, and Donald doesn’t have 1,237 delegates, in which case I think he and I will both have a ton of delegates, and we’ll be neck and neck. I don’t know who will be on top. But if we don’t get to 1,237, we could easily be on top, or we’ll be neck and neck. And then, you actually have the convention, the delegates decide between  the candidates that have gotten a whole bunch of delegates. That’s actually the democratic process working the way it’s supposed to. And I think there, then it becomes a decision for the delegates.

Cruz: Well, I think Donald has given us no reason to believe that he respects the Constitution or the Bill of Rights. We know on the 2nd Amendment that Donald Trump supported Bill Clinton’s national legislation banning some of the most popular firearms in America. We know on the 1st Amendment that Donald Trump has spoken out against freedom of speech, freedom of the press, that he does not like criticism, and he wants to use government power to silence anyone who criticizes him. And you know, I’ll tell you, one of the things I talk about on the campaign trail quite a bit is actually the question you asked us two debates ago, where Hugh, you asked us about religious liberty and the Supreme Court. And Donald turned to me, and he said, Ted, I’ve known a lot more politicians than you have.” Now on that, he is right. He has been supporting liberal Democratic politicians for 40 years. I have no experience doing that. But Donald continued. He said when it comes to the Supreme Court, when it comes to religious liberty, he said Ted, you’ve got to learn to compromise. You’ve got to learn to work with Democrats to cut deals and go along to get along. Well, I think that is one of the sharpest divides in this primary. Let me be very, very clear to your listeners. I will not compromise away your religious liberty. And I will not compromise away your 2nd Amendment right to keep and bear arms. And Donald Trump is promising us if he’s president, he’s going to cut a deal with Harry Reid and Chuck Schumer to select Antonin Scalia’s replacement, and any judge they sign off on is going to be a left-wing judicial activist who will undermine the Constitution and Bill of Rights. I’ve spent my entire life fighting to defend the Constitution and Bill of Rights. And every justice I put on the Court will ferociously defend your and my rights.

Cruz: Well, look, it’s very simple, because every network would cover Donald, and they’d ignore us. I mean, the networks do that all the time. You know, go back last Saturday. We had Super Saturday. And a week ago, we won huge victories in Kansas. We won a huge victory in Maine. We tied with delegates in Louisiana. That morning in Wichita, Donald Trump and I spoke back to back at the Wichita Caucus. Fox News carried Donald Trump live. They didn’t carry me. They do that every single day. So if we spoke at the same time, every network would cover Donald, and I would be a tree falling in the woods that no one hears, because the network execs back Donald Trump, and they’re doing it because, for the bulk of them, they’re liberal Democrats who want Hillary Clinton to win.

Hewitt: I played Hillary Clinton’s coal comments, that she’s going to get rid of a lot of coal miner jobs, and her Libya comments that no one was killed there to Reince Priebus in the segment before you. Can you beat Hillary where Donald can’t? Can you win states that Mitt Romney didn’t win?

Hewitt: On that note, Senator Cruz, we’ll talk to you after Super Tuesday II is over. Thank you, Senator.