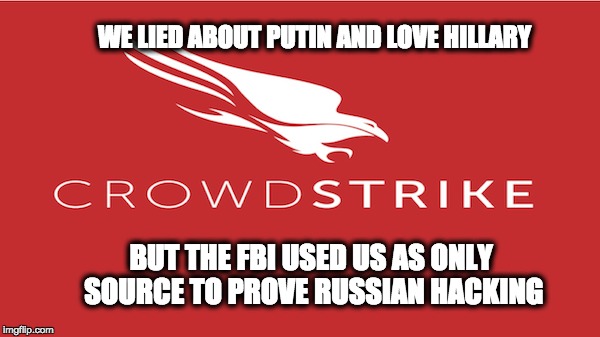 Reported in January, the FBI based its decision that it was the Russians that hacked into the DNC computers on a report commissioned by the DNC and generated by a company called CrowdStrike (the FBI was never allowed to examine the DNC server). The VOA recently caught CrowdStrike creating a bogus and unrelated hacking charge against Russia, and making up the facts to prove its veracity.

To make their determination that the Democrats were hacked by Russia, the FBI relied exclusively on information from private digital forensics company Crowdstrike. It wasn’t the FBI’s fault the DNC wouldn’t allow the FBI to look a their servers for the hacking investigation, instead forced them to use the Crowdstrike report paid for by the Party.

“The FBI repeatedly stressed to DNC officials the necessity of obtaining direct access to servers and data, only to be rebuffed until well after the initial compromise had been mitigated.”

The FBI did substantiate that it relied on data from Crowdstrike in their investigation, but they blamed the Party for not looking at the servers themselves, according to the FBI official who spoke to wired:

Ten weeks after the above report CrowdStrike’s reputation is currently unraveling. Why? It seems that CrowdStrike is as politically motivated as everyone else in Washington, D.C. The company is an opponent of Russian President Vladimir Putin and has been caught lying about a report to make a claim about Russian hacking damaging Ukrainian technology.

The company who the DNC and FBI relied on not only made up a problem that didn’t exist, but then blamed it on Putin’s Russia. Shouldn’t that call into question the entire premise that it was the Russians who hacked into the DNC?

Even before the Democrats were using the Russian hack story in a lame attempt damage the nascent Trump presidency, they were using the tale as a tool to deflect from the Clinton scandals–before Wikileaks started publishing the Podesta emails. They took a joke made by the future president and turned it into a scandal, and when Wikileaks began publishing the Podesta emails, they simply added it to the Putin charges.

Now I am not suggesting that Putin is a boy scout, he is a despicable tyrant.. Was the report commissioned purely for campaign purposes? Based on the fact that the company has close ties to the Obama team, is friends with Hillary Clinton, and is connected closely to Ukrainian oligarch Victor Pinchuk (another friend of the DNC) can we really believe the report was done without  DNC input, or did members of the party the campaign direct Crowdstrike toward the Russians, which the company already has a beef with?  If everything was above board—well why didn’t the DNC allow the government intelligence sources to look at their server?

But most importantly, why is the FBI relying on this report, and why isn’t the House or Senate Committees investigating the Crowdstrike report?