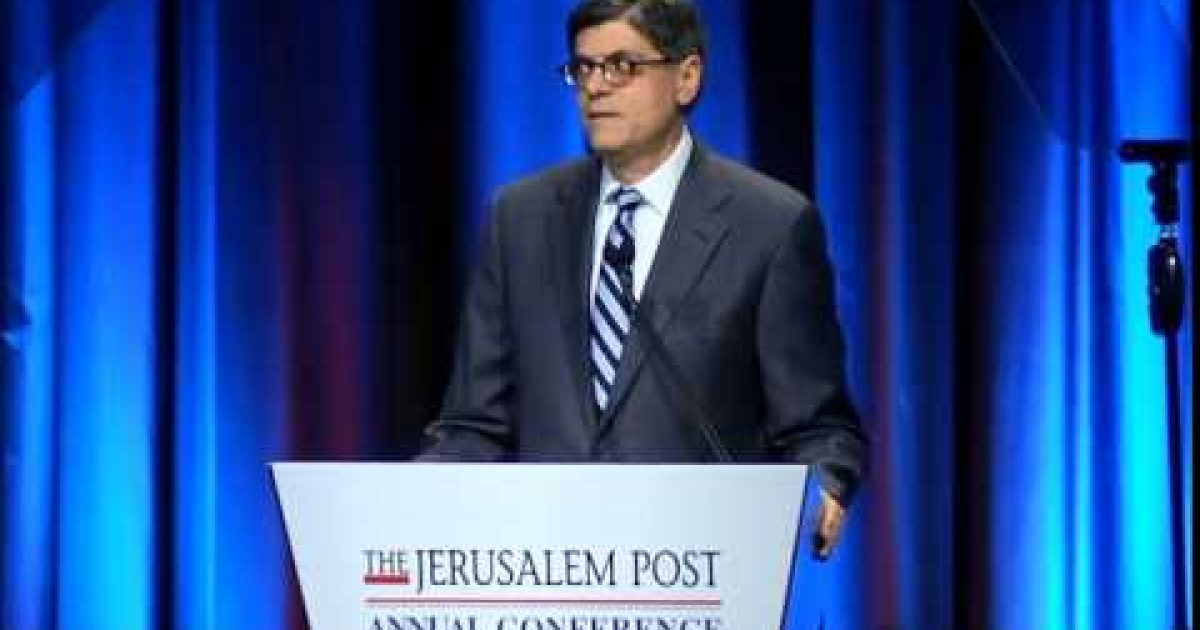 One commentator suggested that booing Jack Lew at the Jerusalem Post conference today would “piss off Obama.” What most don’t realize is that the boos were the pro-Israel communities way of telling the administration that they are tired of being “pissed on by Obama.”

Playing the role of the Obama “house Jew” Treasury Secretary and Orthodox Jew Jack Lew spoke on Sunday to the 4th annual Jerusalem Post conference in New York. As he was tried to defend the most anti-Israel administration in history, Lew was met with catcalls, screams of “nonsense,” and even some boos by the pro-Israel crowd upset that the administration official was “peeing on their legs and saying it  was raining.”

As Lew proclaimed that “no administration has done more for Israel than the current one,” and that “we do not at all assume that Iran intends to act with innocent intentions,” a large number of audience members began hooting, booing, and yelling “nonsense,” as well as intoning sharper invectives.

Lew continued, saying that the U.S. “strategically assists Israel daily, and we stand against those who question Israel’s legitimacy and right to exist.” This, too, earned audience opprobrium.

At one point, Lew was forced to stop speaking and address the audience response, saying that “I understand that we do not agree on everything, but there is no doubt of the commitment of President Obama to the State of Israel.”

Lew, who is an Orthodox Jew, told the audience that he, too, was concerned over Israel’s future and security. “We can never allow Iran to obtain nuclear weapons,” he said to cheers this time. Even louder cheers came when he invoked the name of Israel’s Prime Minister, saying that “Binyamin Netanyahu does not believe we can trust Iran.”

But Obama does, apparently, which was why the audience reacted so negatively, said one observer. “This was the worst I have ever seen a U.S. official ever treated in front of a pro-Israel audience,” he added.

While Lew wasn’t the real target of the crowd’s anger (his boss the president was) he brought the crowds wrath upon himself by spinning Obama’s anti-Israel policies and acting as the Obama administration’s “house Jew,” joining other Jews such as Martin Indyk, the Atlantic’s Jeffrey Goldberg as well as Abe Foxman of the Anti-Defamation League (ADL) and the American Jewish Committee’s David Harris who are exploited by the administration to either trash Israel or suppress criticism of Obama within the Jewish community.
After Lew’s speech Israel’s National Infrastructure Minister Yuval Steinitz took the stage to praise Lew’s actions in getting Israel included in the Organization for Economic Cooperation and Development. And Natan Sharansky came to Lew’s defense during his own speech, saying that as an aide to Senator Tip O’Neill in the late 1970s, Lew had played a major part in bringing about the release of Soviet Jews.

Both Steinitz and Sharansky were correct, but their points were irrelevant. The boos weren’t directed at Lew, they were directed at the most anti-Israel administration in history. Lew simply volunteered to be the administration’s spokesman.

Yair Lapid tried to “make nice” with the Treasury Secretary:

Yesh Atid leader Yair Lapid made a personal appeal to Lew in a meeting on the sidelines of the conference, telling US treasury secretary, “The boos that were directed at you represent an ugly and embarrassing act. Israel greatly appreciates the relations with US administration.”

Lapid added: “If we want to maintain good relations with the US administration we need to know how to behave politely to all senior members of the administration, and once again, we have failed and fallen at this.”

A friend of mine asked “What good did the boos do besides allowing the hecklers to hear their own voices?” I responded with “What good has all the politeness done to get this administration to reverse their anti-Israel and anti-Semitic policies? Perhaps it’s time for American Jews and all friends of Israel to boo the Obama administrations policies. Perhaps we should get even angrier when he uses a “house Jew” to help push his policies believing they would be more acceptable coming from one of our own.

Boos and catcalls are an expression of free speech, it’s the only way for a crowd to non-violently show their objections to being thrown a load of horse poop. Things have gotten desperate, Obama threatens to complete a pact which will allow Iran to get nukes, he threatens to abandon Israel at the United Nations, he makes demands on Israel but none on the Palestinians even when they fire missiles into Israel has they did this week. And don’t forget all the reports of Iran’s satellite Hezbollah putting 150,000 missiles on the Lebanon/Israel boarder.

Perhaps organizations hosting conferences such as the JPost or AIPAC etc. should tell the Administration that they are losing support within the pro-Israel Jewish community and they should expect catcalls if they present nothing but nonsense and spin. Or even better, perhaps they should forgo invitations to an anti-Israel administration. Let Obama administration figures speak to J Street, the faux pro Israel organization deemed as illegitimate until Obama came into office and decided that they should have a seat at the table.

I did not attend Sunday’s Jerusalem Post conference, however if I were there most likely my voice would have been added to the catcalls. Those who booed and let the Obama Administration hear their opinions should be very proud of themselves because they did the right thing.