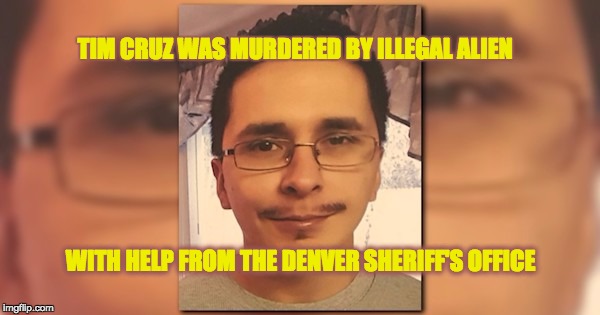 There’s a major story brewing in Denver where one of the suspects accused of robbing and then murdering a man in a Denver, Colorado light rail station should have never been able to commit the crime. But the Denver Sheriff’s office didn’t honor an ICE detainer and released a criminal illegal alien into the public to take a life.

Ever Valles and Nathan Valdez have been charged with the murder of 32-year-old Tim Cruz. In and of itself, the crime is horrible. An innocent, law abiding man’s life was taken from him and his friends and family will have to suffer with that loss for the rest of their lives. However, the pain is compounded by the fact that Valles should have never been loose on the streets to commit this terrible act.

Just a few weeks before the murder, Immigration and Customs Enforcement (ICE) had placed a detainer on Valles after he’d been arrested by the Denver P.D for car thefts (and other charges). ICE believed Valles was in the country illegally and that he was a known gang member and wanted to know if he would be released so that they could pick him up and deport him. Sadly, ICE says that they were never informed of Valles’ release, though the Denver PD says that they did let ICE know that Valles had posted bond and would be released.

“Denver has never and will never advocate for felons to remain on our streets — immigrants or not. We are part of the criminal justice system and do not hold people on civil matters.”

However, a source told Fox31 in Denver that the sheriff’s department’s statement was misleading because they didn’t give ICE advanced warning of the release. ICE agreed, saying they were given only 25 minutes warning and did not have time to get to Valles before he was released.

ICE considered Valles an “immigration enforcement priority. Believing him to be a “known gang member whose gang history is documented in the Colorado gang database.”

“If being a sanctuary city means that we value taking care of one another, and welcoming refugees and immigrants, then I welcome the title,” Hancock said in the nearly three-minute video. “If being a sanctuary city means families and young ‘Dreamers’ live with hope and not fear, then Washington can label us whatever they want,” he added, referring to a group of young undocumented immigrants who came to the U.S. as children.

He continued: “If being a sanctuary city means that our law enforcement officers are expected to do the work of federal immigration authorities, or violate the constitutional rights of any of our people, we reject that.”

What about the constitutional rights of Tim Cruz, the victim?

Parts of this post were originally posted at Constitution.com