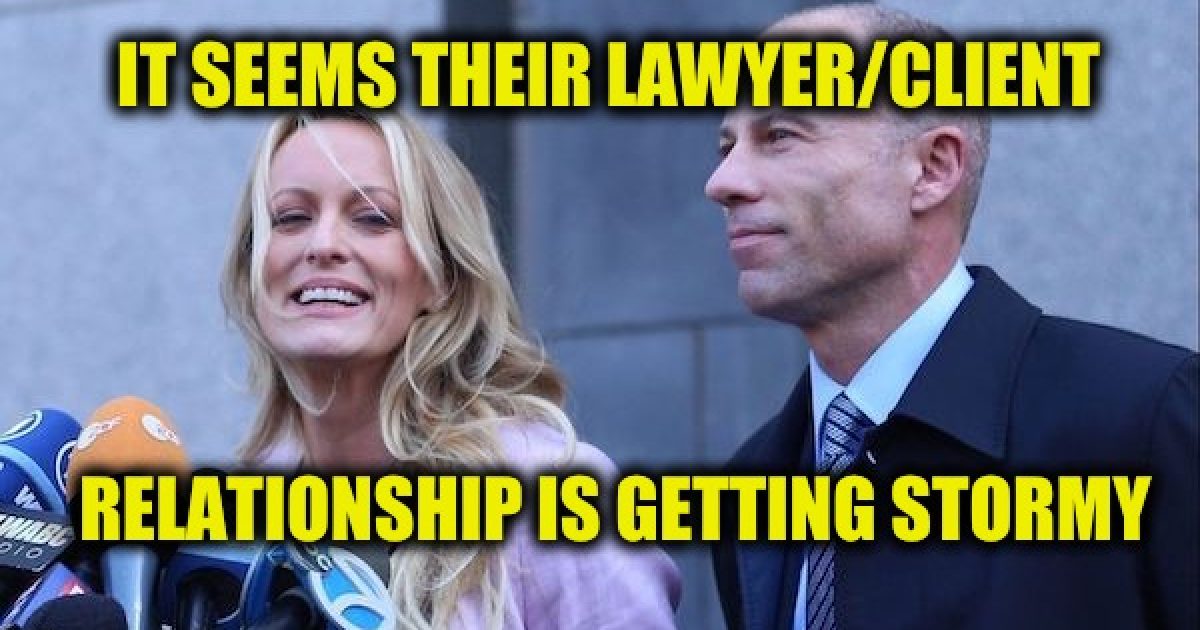 “I haven’t decided yet what to do about legal representation moving forward. Michael has been a great advocate in many ways. I’m tremendously grateful to him for aggressively representing me in my fight to regain my voice. But in other ways Michael has not treated me with the respect and deference an attorney should show to a client. He has spoken on my behalf without my approval. He filed a defamation case against Donald Trump against my wishes.”

“For months I’ve asked Michael Avenatti to give me accounting information about the fund my supporters so generously donated to for my safety and legal defense,” Daniels said in a statement. “He has repeatedly ignored those requests. Days ago I demanded again, repeatedly, that he tell me how the money was being spent and how much was left.

“Instead of answering me, without my permission or even my knowledge Michael launched another crowdfunding campaign to raise money on my behalf. I learned about it on Twitter.”

In three weeks, we have a key hearing in Stormy’s case relating to our ability to force Trump to testify under oath about his role in the criminal conspiracy. This is a search for the truth. Support Stormy’s courageous efforts at https://t.co/lE9LHfEQVN

Despite her hint that Avenatti has misappropriated the cash, Avenatti disputes the allegation and says that it was Daniels who spent most of the money, not him.

“The retention agreement Stormy signed back in February provided that she would pay me $100.00 and that any and all other monies raised via a legal fund would go toward my legal fees and costs. Instead, the vast majority of the money raised has gone toward her security expenses and similar other expenses. The most recent campaign was simply a refresh of the prior campaign, designed to help defray some of Stormy’s expenses.”

But the fundraising site CrowdJustice is questioning Avenatti’s efforts:

On Wednesday evening, the website CrowdJustice removed a new fundraiser Daniels’ lawyer Michael Avenatti had launched to amass funds for her court battle with President Trump and his former fixer, Michael Cohen. Avenatti told The Daily Beast that he asked the site to take it down.

CrowdJustice is also reviewing a fundraiser Avenatti created to help families at the Mexican border that raised $159,863. It was billed as a campaign on behalf of “a group of detained mothers and children,” but doesn’t specify the names of the beneficiaries.

“Given recent press reports in relation to Ms. Clifford’s crowdfunding campaign, we are also conducting a review of this campaign and although pledging is still enabled, we have paused card charging on pledges (so that further funds will not be released) while that review is ongoing,” CrowdJustice said in a statement, referring to Daniels by her legal name, Stephanie Clifford.

Stormy Daniels and her husband have been accused of threatening a couple who helped manage the adult film star’s online store, and the men have filed a police report claiming they now fear for their safety.

Keith Munyan and J.D. Barrale are longtime partners and friends of Daniels. She once rented a home from Munyan, and has publicly referred to them as her “Gay Dads.” The two men just filed a police report with the Santa Barbara County Sheriff’s Office.

And it looks as if Michael Avenatti couldn’t get the word out fast enough:

Uh, this looks a lot like an attorney retaliating publicly against his own client, the day after she accused him of serious misconduct. https://t.co/NZVEL60IAx

Yup, and the original tweet he deleted was worse. pic.twitter.com/oG86aDqiBZ

Gee, I wonder who tipped off The Blast about the threats by Stormy and her Husband at midnight. And how did Avenatti find out so fast?

Some of this post was first seen at GodFatherPolitics