Creepy Joe Biden Tells 10-Year-Old Girl, ‘I Bet You’re As Bright As You Are Good Looking’ 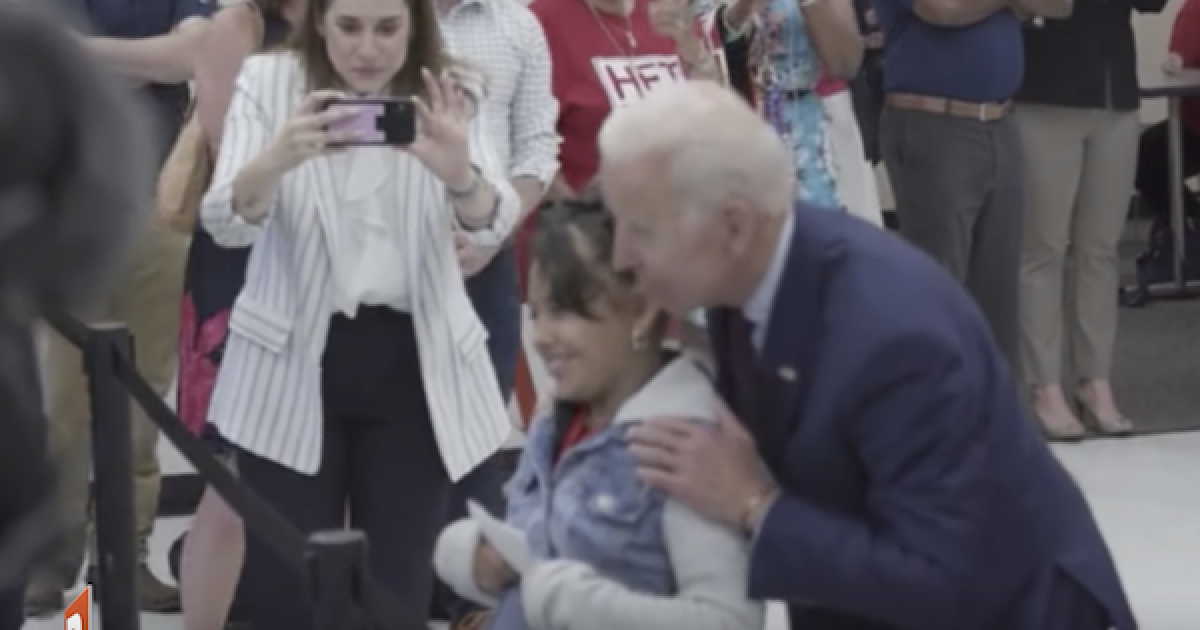 No. Imagine if any Republican, man or woman, said this to a little girl.

Not only would feminists cry foul but all liberals would demand he drop from the presidential race.

In a somewhat odd moment at last night’s AFT town hall, Biden tells a 10-year-old girl, “I’ll bet you’re as bright as you are good-looking.” He takes her over to the assembled reporters, then stands behind her and puts his hands on her shoulders while he’s talking.

Tuesday’s exchange caught the attention of The Washington Post’s Felicia Sonmez, who called it “somewhat odd” in a now-viral tweet. Thousands of people have responded to Ms. Sonmez’s tweet, calling the former vice president “creepy” and “inappropriate.”

Same old Uncle Joe. I thought he said he was going to change.

The AFT Tweeted out the story, in a “matter of fact” manner:

After finding out her dream is to go into Journalism, @JoeBiden brought the student over to meet the press cameras in the back of the room. #AFTVotes pic.twitter.com/wLleDVR373

How does he keep getting away with this stuff? Well, it’s good to be a progressive Democrat.

Declared 2020 presidential candidate Joe Biden’s lengthy record bit him in the behind again on Thursday, as racially charged comments from Biden back in 2007 began to recirculate online.

When Biden was asked by The Washington Post about the discrepancy in school performance in Iowa compared to schools in Washington, D.C., the Democrat cited the high population of African-Americans and other minorities in the D.C. area.

Biden said, “There’s less than one percent of the population of Iowa that is African American. There is probably less than four of five percent that are minorities. What is in Washington? So look, it goes back to what you start off with, what you’re dealing with.”

He added, “When you have children coming from dysfunctional homes, when you have children coming from homes where there’s no books, where the mother from the time they’re born doesn’t talk to them — as opposed to the mother in Iowa who’s sitting out there and talks to them, the kid starts out with a 300-word larger vocabulary at age three. Half this education gap exists before the kid steps foot in the classroom.”

reporter: why are schools in iowa are better than DC?
joe biden: lol black people of course pic.twitter.com/T916JDaFJ1

Although Biden firmly remains the 2020 Democrat frontrunner, he may not find himself in that position for very long.

Day after day, year after year, the former vice president finds a way to commit a more significant gaffe. For President Trump, Biden is the gift that keeps on giving.

Joe says illegal aliens deserve to be taken care of by the American taxpayer.

This is what he believes is a winning strategy for 2020, huh?

He noted, “I think that anyone who is in a situation where they’re in need of healthcare, regardless of whether they are documented or undocumented, we have an obligation to see that they are cared for. That’s why I think we need more clinics around the country.”

Joe Biden says the US should provide healthcare to people “regardless of whether they are documented or undocumented.” pic.twitter.com/19La4DEtXK