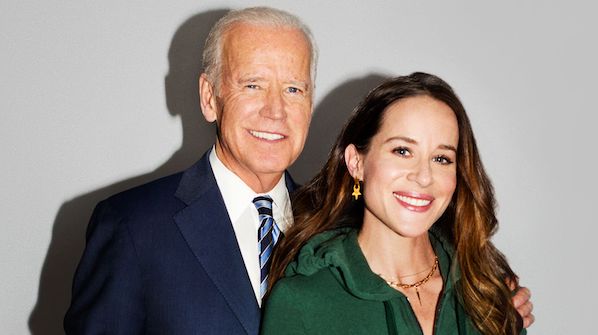 Tucker Carlson opened his Friday show with a segment on Ashley Biden’s diary. The part of the diary discussed revealed that Joe Biden is creepier than we thought.

Ashley Biden is Joe Biden’s daughter. She inadvertently left her diary under the bed at a halfway house, and the lady who found the diary, Aimee Harris, sold the diary to the media. It was not stolen. But now, some of the revelations from the Daily Mail, which has a copy of the diary, are damning…and reveal definitively that Joe Biden should not be the President of the United States. An investigation should be warranted, but nothing is likely to happen. The Bidens are a protected family.

As with the Hunter story, the diary contents began to leak out when National File got a copy of the diary and exposed it under the title of “Biden Daughter’s Diary Details ‘Not Appropriate’ Showers With Joe As Child.”

The author [Ashley Biden] explored why she felt this need to have sex, saying she believes she was molested as a child.

“Was I molested? I think so – I can’t remember specifics but I do remember the trauma,” wrote the author, before listing a series of potential incidents, one of which may have included Ashley Biden’s cousin Caroline Biden, as the author says she remembers “being somewhat sexualized” alongside a person named “Caroline.”

In November of 2021, Uncle Sam’s Misguided Children wrote about the FBI conducting a raid of journalists at Project Veritas. The FBI claimed they were looking for a “stolen diary.” (Not a Federal crime). Now we see that it wasn’t that her diary was stolen, despite the wording on the search warrants, but that her diary contained damning information about the man occupying the White House.

“I have always been boy crazy… Hyper-sexualized @ a young age … I remember somewhat being sexualized with [a family member]; I remember having sex with friends @ a young age; showers w/ my dad (probably not appropriate).”

Ashley Biden sometimes appeared to say that Biden’s showers with her may have led to her sex and drug problems, and other times called her parents supportive. 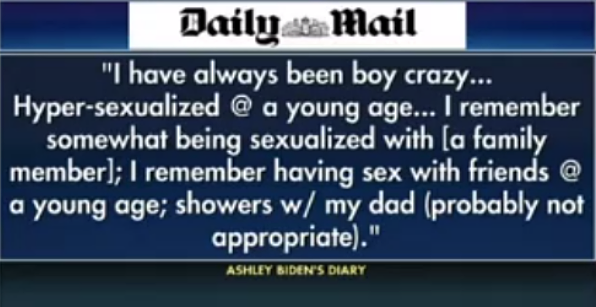 I relapsed. F***ing again,’ she wrote on March 16. ‘The difference this time around was that I told Elizabeth, Mom + Dad this morning. Mom + Dad worried but incredibly supportive. I am so lucky to have them on my side.’But four months later, her continued drug abuse left her on the brink of financial ruin and her father in tears.‘My dad cried on the phone saying he has the debate in a week + ‘now has to worry about you.’ she wrote in a July 27 entry.‘And he cried. Maybe he knows what he is doing + it’s worked but my feelings of guilt often are overwhelming.’

She added that her finances were ‘down to the wire’ and under a list headed with the word ‘Resentful’ she wrote ‘Dad – $, control’. Under a second list titled ‘Hurt’, she wrote ‘Dad – hurting self, lying’.

Ashley was also having serious trouble in her marriage.

According to her diary entries, she was having affairs with men other than her husband, surgeon Howard Krein, now 55. Screenshot of Biden and daughter Ashley from 1987

Ashley Biden’s drug and sex addictions reveal a similar pattern to the mess her brother Hunter displayed in his laptop’s videos and emails from hell. Their struggles with drugs and sex are a reality – and Joe Biden’s poor parenting is the likely source. This explains why Biden has been accused of inappropriate behavior over the years and how he earned the nickname “Creepy Joe Biden.”

The current occupant of the White House has a problem, not to mention the destruction of America. Perversion appears to be part of the DC swamp on many levels. And the FBI is complicit in it all. Just like they were complacent in the Russiagate scandal.

On top of the violation of the First Amendment with their actions, the FBI has become Biden’s Secret Police, intent on covering for the creepy man occupying the White House. Ms. Harris, who found the diary, is being investigated not for stealing the diary but for selling it to the media. The search warrants the FBI used to tear apart Project Veritas’ homes all stated they were looking for a “stolen diary.” Again, that is NOT a Federal crime, even if stolen. The Biden administration can violate the Constitution at will and fail to investigate those who actually NEED investigating.

On June 18, 2022, Tucker Carlson opened his show by explaining the FBI’s raid on the home of James O’Keefe, the founder and President of Project Veritas, who bought the rights to publish the diary for $40,000. The fact that he had a copy of the diary was not illegal. Therefore the only reason for the raid was to protect the Biden family.

After discussing the raids, Tucker went into the details revealed in Ashley Biden’s diary. The video follows