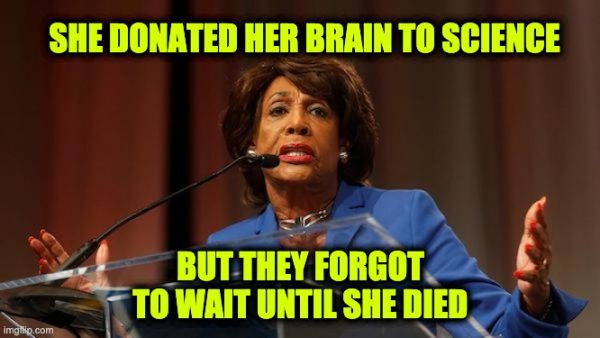 Democrat Representative crazy Maxine Waters (D-CA) says she doesn’t use the term “rioting” to describe violent attacks in our cities because it has racial connotations.

In an interview with New York Magazine, Waters also said the terms “lazy” and “criminal” are also racist. But she didn’t mention crazy, which is the best way to describe Waters.

Apparently, those terms can only be applied to people of one race.

“A lot of negative language gets used against black people, describing what whites often believe is true about us: that language includes ‘lazy,’ ‘criminal,’ and ‘rioting,” she said. I told you she was crazy. And the latter two terms apply accurately to those people, regardless of skin color, burning down cities, during the past two weeks, or any time with similar activity.

According to Websters, a riot is a “violent public disorder.” it doesn’t mention skin pigment.

As for lazy, that would apply to the entire House of Representatives. The House was in session eight days in May.  That averages 2x a week.

“It’s all negative language,” Waters continued, “used far too often in a description of black people by folks who fundamentally don’t see black people the same way they see whites and others.”

A conversation with @RepMaxineWaters on the history of protest, the language of insurrection, and the "unbelievably racist" rhetoric that Donald Trump has used https://t.co/10CSEmyNMF

One has to wonder if the term “low-IQ” is also on her secret list of racist terms. Because, as President Donald Trump has said, Waters is most definitely an example of that. Well—that AND she’s nucking futz.

On some occasions, it is difficult to explain just how much of a walking, talking contradiction of lies the California lawmaker is. This isn’t one of those instances, however.

For, Waters stating that she doesn’t like to call the George Floyd riots’ riots’ because it is “negative language” used against “black people,” doesn’t quite jive with recent comments.

When the President started discussing the need for law and order to stop those riots, she responded by accusing him of wanting to murder both black and white children.

?? @RepMaxineWaters as protests resume in US cities: "Change is going to come from the people. ⏩ Time's Up." pic.twitter.com/U5UhAV1mIS

Actually, change will come when people stop electing crazy people of any race, color, or faith–a crazy leftist who donated her brain to science a bit too early—someone like Maxine Waters, to congress.