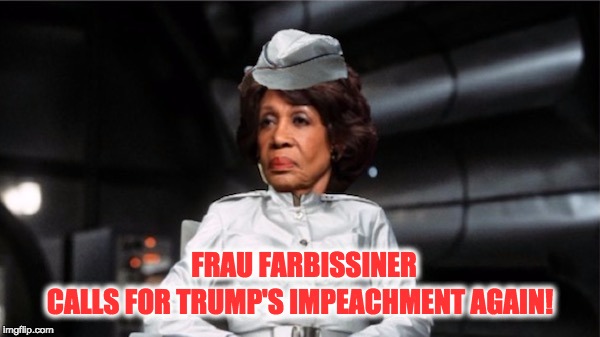 For the second time since she claimed she never called for President Trump to be impeached, Maxine Waters  Austin Powers Frau Farbissiner  wannabe, and corrupt California Congresswoman has been seen on TV calling for Trump to be impeached. she told Chris Hayes   that the President should be charged with Obstruction of Justice for firing Comey.

On Wednesday she was on a different MSNBC program and said if Hillary was president (God forbid) it would have been okay for her to fire Comey, but not Trump.

In her mind, everything has to do with Russia, and the White House are a bunch of associates of the ‘Kremlin clan.’ So, by firing Comey when he did, it’s obvious that Trump did that because Comey was ‘getting too close.’ “If you get too close in this Russia investigation, he’s coming after you,”

When Hayes asked her about impeachment, Maxine Waters responded:

“I’ve said all along that he will lead us to impeachment, and he’s doing just that. Everyday, more and more is unfolding. I told you that I thought there was a Kremlin clan and these were his allies.

“I had a resolution back in February that said he should be investigated for collusion… If we do the investigation, everything is there.

“We’re fiddling while Rome is burning. This president needs to be impeached. I believe that. I believe there was collusion. We need to get on with the business of doing real investigations.”

Maxine Waters, the corrupt Congresswoman and Frau Farbissiner  wannabe ( BTW the name of the Austin Powers character is Yiddish for sour-puss) neglects to mention that if anyone deserves to be thrown out of office for obstruction of justice. After all when Maxine Waters was caught using taxpayer dollars to helping an unsound bank (OneUnited) receive government aid (to help her husband who was an officer and stock-owner of the bank) she found a way to lie and blame it on her grandson. Now THAT’s obstruction of justice.