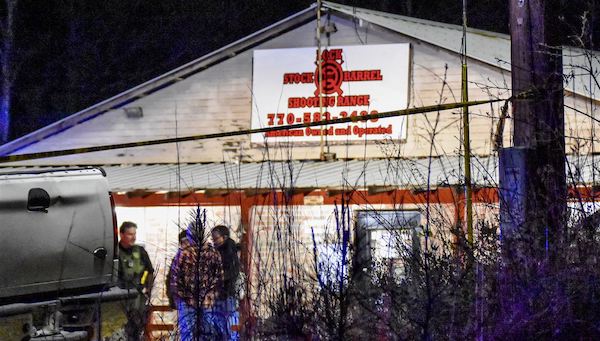 Grantville, Georgia – A robbery at a gun range in Coweta County, Georgia left the owner, his wife, and their grandson dead, with 40 firearms stolen. The incident occurred between 5:30 p.m, and 6 p.m. on Friday at the Lock, Stock, and Barrel Gun Range. The robbery suspects(s) also took the camera footage. The range is approximately 50 miles south of Atlanta. As the news about the robbery and the murders began to spread, liberals used it as an excuse to attack gun ownership.

NEW DETAILS: Grantville police say the owner of the shooting range, his wife, and grandson were all killed in a robbery here. The suspect(s) got away with 40 weapons and the camera footage from the scene. Full report on @GoodDayAtlanta pic.twitter.com/yWTCwW96my

Tommy Hawk, his wife Evelyn, and their 19-year-old grandson Luke were killed in the robbery at their gun range, the Lock, Stock, and Barrel. Luke was home for Spring break at the time.

Luke was there to help his grandparents because Tommy was still recovering from a stroke, and was only then just getting back to a regular schedule. The Hawk family generally closed the shop at 5:30 and were home by 6. When they didn’t come home, their son went to the range where he found them and called 911.

There was a robbery at the lock stock and barrel shooting range at around 530- 6pm on Friday. Officers were dispatched to the scene shortly after 8pm. Sadly it was found that the owner, his wife, and their grandson had been murdered. Approximately 40 weapons and the camera DVR were taken from the scene. The GBI was called in to work the case. Due to the amount of weapons taken, the ATF was also called in to assist as well as members from the Coweta County Sheriff’s department. Let’s keep Richard Hawk and Family in our prayers. Anyone having driven by the shooting range during the time frame of 530pm to 630 pm that may have seen vehicles other than a white Ford dually truck and a black Ford expedition are asked to contact the police department. Please share, maybe someone will remember seeing something to assist with the investigation.

(1/2) The GBI, ATF, & Grantville P.D. are seeking info. about a robbery & triple homicide in Grantville.

Anyone who visited the Lock, Stock & Barrel Shooting Range or saw anything along Bohannon Road on Friday, April 8th is asked to call the GBI Tip Line at 1-800-597-TIPS. pic.twitter.com/AsSR9mq466

The Twitterverse was awash with liberals crying that guns don’t save people. They might have if the robbers hadn’t “got the drop” on the people who were closing up. As a general rule, guns can’t shoot themselves. The Twitterverse apparently doesn’t know that nor do they know the concept of “too soon”

Community in shock after triple murder in Coweta County, $15K reward offered https://t.co/pMmtmcxYsw So the second amendment and all of their guns didn't protect this family. Maybe we need even more guns.

Hmm. Weird. A whole shop full of guns didn't protect the family who owned the shooting range. It's almost like we should….have fewer guns? But what do I know. https://t.co/IyoseZvmcp