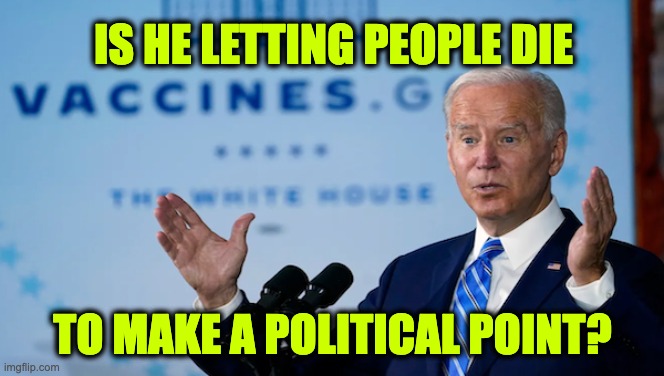 It was only a matter of days ago that President Joe Biden made a startling statement to state governors around the nation, essentially suggesting that the federal government was no longer in the pandemic-busting business.

Instead, it would be up to local leaders to handle the coronavirus crisis, including this latest surge of the omicron variant that has nearly collapsed the US COVID testing infrastructure.

I suppose his new strategy is to make people die so they can’t complain. Because, now, in another startling shortage, Biden’s team is denying the shipment of certain COVID treatments to the states, despite their continued begging.

Last week, the Biden administration paused shipments of the Regeneron and Eli Lilly treatments because of concerns about their effectiveness against the omicron variant.

The monoclonal antibody treatment Sotrovimab continues to be distributed.

There was an immediate round of criticism.

Florida Surgeon General Joseph Ladapo directly criticized the administration in a letter on Tuesday for “actively preventing” distribution of the treatments, noting they could be used in delta variant cases of the virus.

“The sudden suspension of multiple monoclonal antibody therapy treatments from distribution to Florida removes a health care provider’s ability to decide the best treatment options for their patients in their state,” the letter read, criticizing the “shortsightedness” of the Biden administration.

Feds paused Regeneron bc it may not work against Omicron. FL says it can still be used in existing Delta cases. pic.twitter.com/9mmw5SsuZJ

Per the CDC, 41% of all the COVID cases in the United States are from the more deadly Delta variant. Therefore the treatment medicines Biden is holding back are needed and could save lives.

According to Ladapo, the reduction went into effect after Gov. Ron DeSantis ordered an increase in monoclonal antibody treatments to combat the Delta variant in August. By mid-September, treatment had been administered to nearly 100,000 people before Washington announced what the state surgeon general called a “dramatic reduction in the number of monoclonal antibodies to be allocated” to Florid

If Biden is playing chicken with the states who don’t seem to support his agenda (while using coronavirus as the battlefield), it would like to go down as one of the most despicable acts of politicking in decades. Just like the border crisis, abandoning Americans in Afghanistan, fixing the lack of covid testing….gee this seems like a pattern.