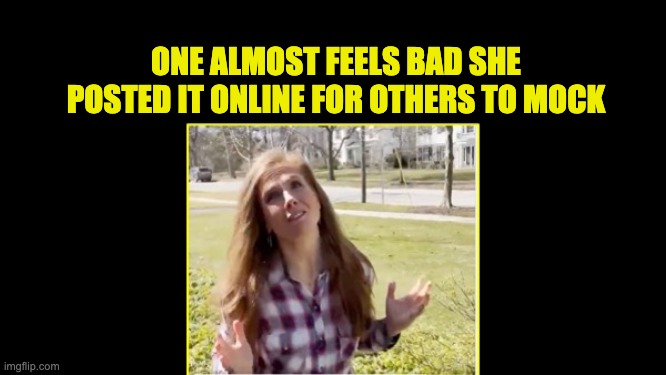 This video is so awful. You almost feel bad that she posted it online for others to mock. Katie Paris

Katie Paris, founder of Red Wine and Blue, a non-profit political organization dedicated to “empowering” suburban women to “build a sisterhood” and “change the world together.”

In other words, it’s a Democrat GOTV (Get Out The Vote) organization.

Paris decided to create a parody Disney video in support of the Democrats’ highly partisan $1.9 trillion COVID-19 relief bill that they’ve disingenuously called the “American Rescue Plan” but was really just a Democrat wish list that has been rubber-stamped.

She sang a revamped version of Part of Your World from The Little Mermaid, but this one was praising the Democrat spending bill. Much like the bill itself, it was filled with Democrat garbage — it has astoundingly bad lyrics and the liberal lady “crazy-eyes.”

Jack Posobiec of One America News posted the video with a challenge.

Cringe Challenge: See how many times you can actually make it through this Biden voter video. I could only do 1 and only just barely. pic.twitter.com/zZEXO5JCA8

Yikes! That was awful!

Not just the content, either. Who filmed that, her cat?! The lighting is just terrible.

Paris said that the “adults” are now in charge… Oh, please! It’s Susan Rice, Kamala Harris, and far-left Democrats pulling the strings of a doddering old man who can’t seem to climb stairs in a slight breeze or remember who his appointees are. That whole “moderate” Joe Biden “unity” agenda that was promised isn’t the one that was delivered.

And she’s thrilled with the vaccine that wouldn’t have been developed if the red-tape-loving Democrats had been in the White House. Operation Warp Speed was a Trump-led initiative and the entire world is benefiting from it, but Democrats won’t give him an ounce of credit.

Paris knows that these kinds of partisan videos get shared widely by both sides — by the Left to “Own the Cons” and by the Right as pure mockery.

And it deserves mockery. That’s what happens when you put yourself out there in public like that.

It would be easy to critique Paris’s Democrat cheerleading point by point, but you can do that just as easily yourself.

What’s interesting is that according to her LinkedIn profile, Katie Paris was the former Senior Vice President of Media Matters For America (MMFA) a highly partisan organization designed to shut down speech that they don’t like. A group so biased the once accused The Lid of Antisemitism.

For someone who has been a part of a company that has “media” in its name, that video should have her banned from posting videos on the internet…well, maybe just a warning label or something to prepare the viewer for the visual and auditory atrocity that was about to unfold. (Unlike MMFA, we’re not big fans of censorship over here.) 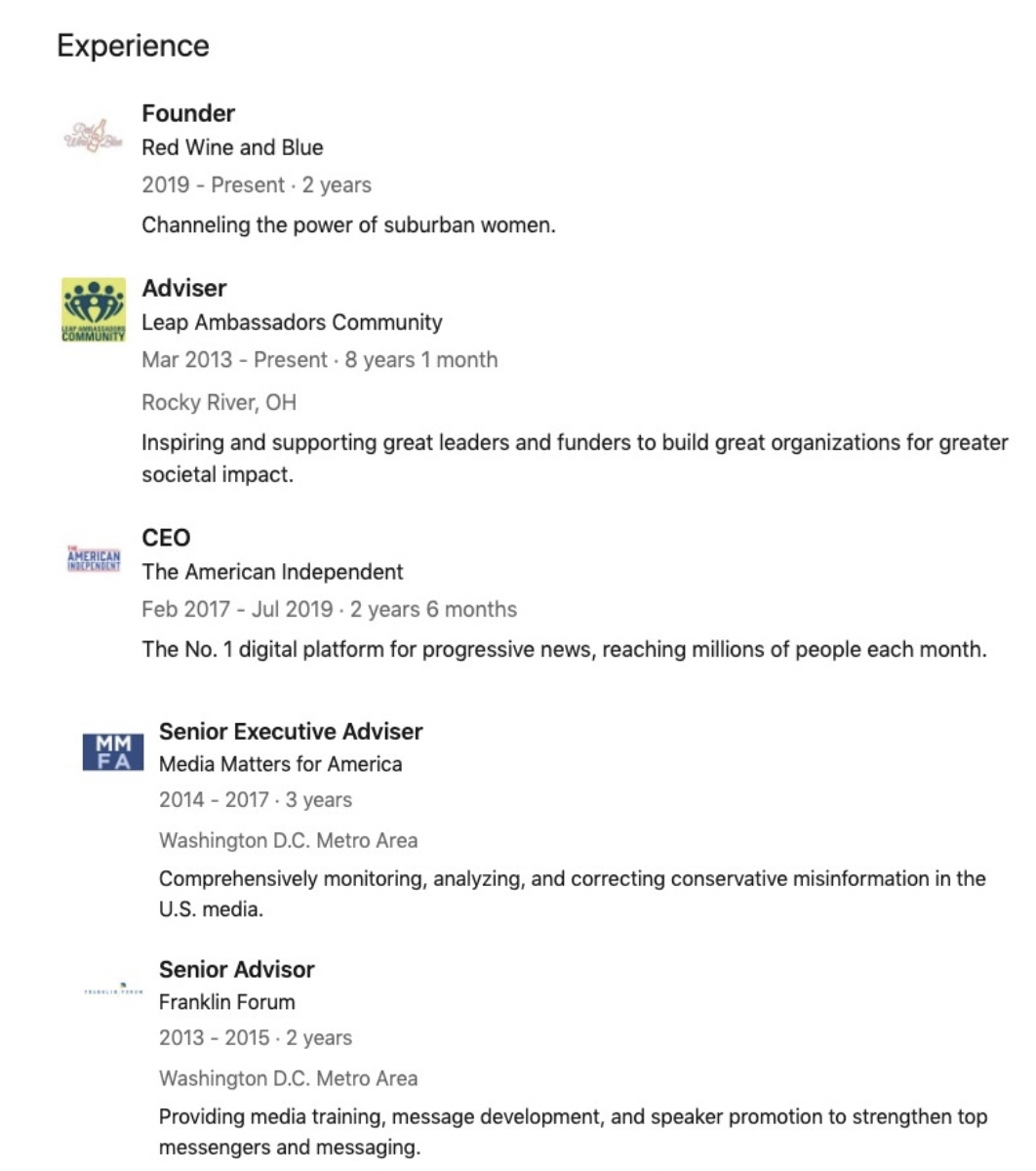 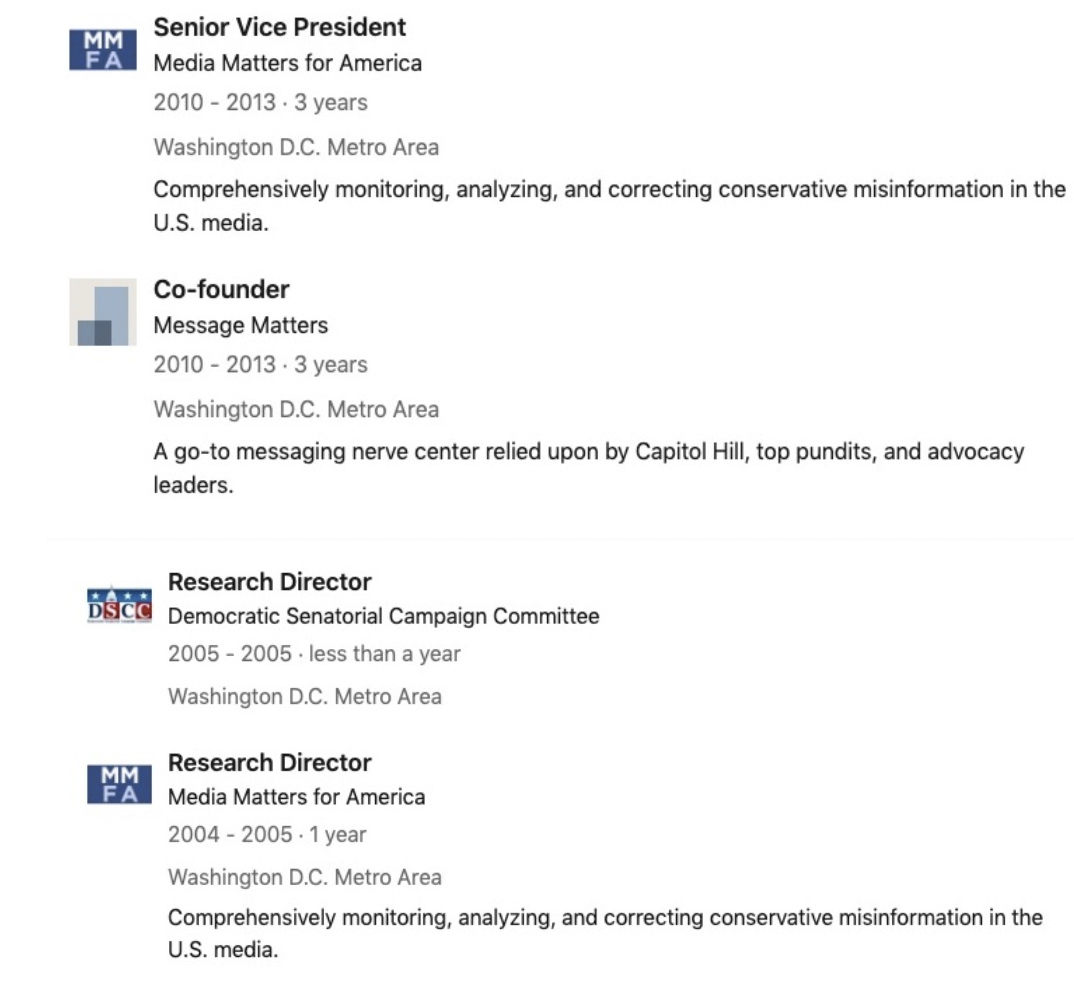 It’s pretty clear that Katie Paris is a partisan and spent a fair amount of time in a leadership position at Media Matters For America, and she is now creating content.

What is MMFA? It’s an overtly partisan 501(c)(3) that was (allegedly) formed to combat the scourge of “fake news” but is really attempting to silence the opposition. They do this by spreading disinformation about alleged conservative misinformation and pressuring advertisers to pull their ads when a conservative journalist or commentator says something they don’t like. They constantly went after the late, great Rush Limbaugh.

Media Matters for Americais a far-left activist organization with strong ties to Hillary Clinton and Joe Biden founded by David Brock. It was created primarily to censor conservative media through blacklisting and intimidation of advertisers and attack the Clinton organization’s opponents. Media Matters has the persistent and unenviable task of undoing and explaining away public perceptions generated by the Clintons’ words and actions…

Within the 90-page three-year strategic plan Media Matters distributed to its donor base and potential contributors, the document reveals that the non-profit entity has an “enemies list” which includes organizations like Fox News, Cato Institute, and Heritage Foundation. The list also targets numerous individuals and executives such as Rupert Murdoch, Roger Ailes, Peter Theil, and Richard Mellon Scaife.

The claim that they spread disinformation isn’t made lightly. MMFA is currently insisting that there is no migrant surge at the border. They’re also regularly trying to shut down right-wing media in general, Tucker Carlson specifically, as well as Fox News itself. They even have the audacity to say that there is no censorship of conservatives on Facebook. Really? ClashDaily’s Big Dawg would like to have a word with Herr Zuckerberg then…

MMFA doesn’t like any sort of news coverage that isn’t overtly “progressive” and is committed to removing conservative media using “fact-checking.” They laid it all out in their 2017-2020 War Plan which we have shared frequently.

But it isn’t just attacking conservative media, the 2017 MMFA war plan detailed the push to impeach President Trump before he was even inaugurated. In January, ClashDaily’s Wes Walker was interviewed on the NOQ Report and took a few moments to explain the MMFA plan to delegitimize Trump as president and to take him down via impeachment.

Oddly, MMFA is viewed by tech companies as neutral arbiters of truth who use them as “fact-checkers.”

This is the former VP of Media Matters. I’ve personally witnessed countless instances at various #tech companies where Media Matters was cited as a credible and unbiased authority on the truth.

Biden voters are the lowest information voters in the history of America. https://t.co/ds8t3oGfh0

This is how the Big Tech Censorship Sausage is made — overt leftwing partisanship is used for “fact-checking” by left-leaning social media platforms and they point to these outfits as impartial. These partisan “fact-checkers” then cite their status as “fact-checkers” as proof that they aren’t partisan and continue to push for the elimination of conservative media while “fact-checking” that there is no censorship on right-wing media. It’s a feedback loop.

So, why bring up MMFA just because a “wine mom” posts a stupid partisan parody video of a Disney song that is performed very badly?

Simple. She’s not just some Biden voter posting her adoring video of the American Rescue Plan — she spent 7 years in a leadership position at an organization that is hellbent on silencing conservatives. Now she’s started a movement to “empower” suburban women to “change the world” by voting Democrat. One of their campaigns was to find “Suburban Housewives of Trump’s Nightmares” because the GOP was specifically attempting to court suburban women in 2020.

She’s not just some random “wine mom” — she’s a “wine mom” with an agenda that has been pretty consistent since 2004.

People watching her video should know that.