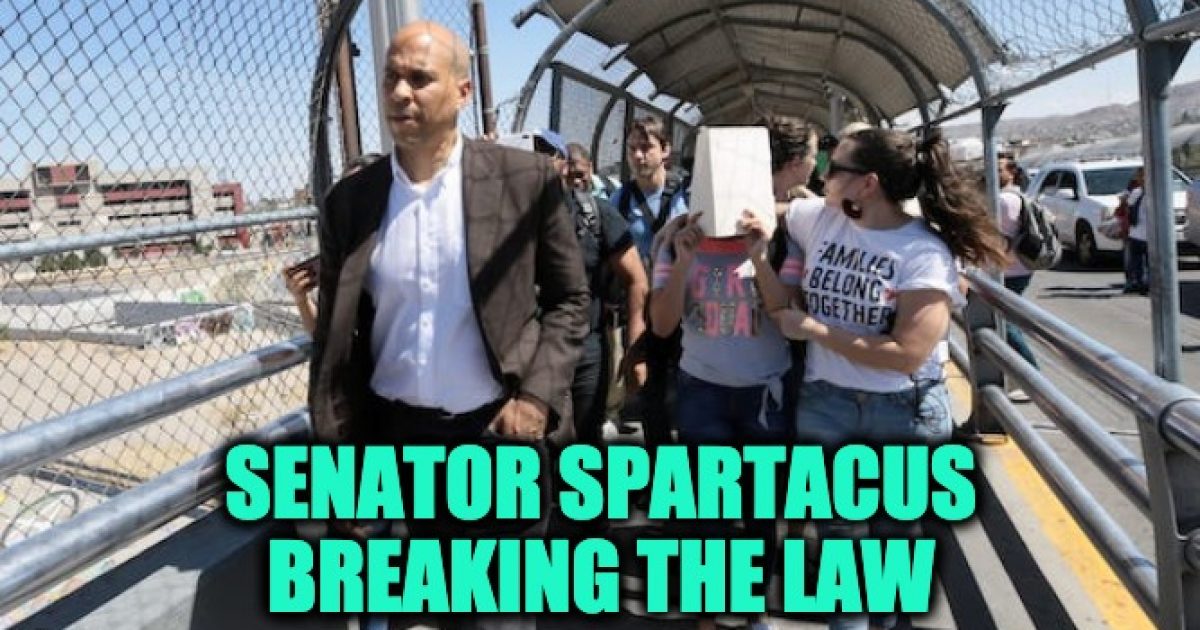 Booker appeared at the U.S. border from Juarez to El Paso on Monday and set out to become a criminal… likely in the hopes that some border agent might try to arrest him so he could get himself into the media spotlight.

His effort to make himself a big deal failed, of course, but he still proved wholly uninterested in obeying America’s laws. A presidential candidate purposefully breaking laws DURING his campaign for president.

Booker’s press secretary, Sabrina Singh, desperately tried to push her boss’s lawbreaking with a tweet announcing his smuggling of five illegals across our border.

NEWS: Today @CoryBooker crossed the U.S. border from Juarez to El Paso with @fams2gether to help escort 5 asylum-seekers and try to prevent them from being sent back to Mexico. https://t.co/SiDIvXJiCc

Courthouse News’ David Lee reports that the five women escorted by booker had already been detained after illegally crossing into the United States. They had been returned to Mexico under President Trump’s Migrant Protection Protocols while they waited for an asylum hearing to occur.

Booker went on to say that he “believed” the five’s “asylum claims,” and then personally smuggled them into the U.S. But who cares because it is not his decision to make. If he doesn’t like the law, he can introduce a bill to change it.

Statistically, their claims are B.S. Over 90 percent of asylum claims are turned down.

Booker was likely hoping his personal criminal actions would make him a big deal with Democrats, but for the most part, his big stunt fell flat, and no one noticed.

He is currently way, way down in the Democrat polls at 3 percent approval among Democrat voters.

He’s a nobody that nobody is paying much attention to, granted, but it is important to note that Democrats simply do not care if they break laws if their agenda wins the day. And their agenda is all about open borders.