Sen. Booker Claims His Gun Plan Would’ve Prevented Virginia Beach (But Won’t Say What It Is) 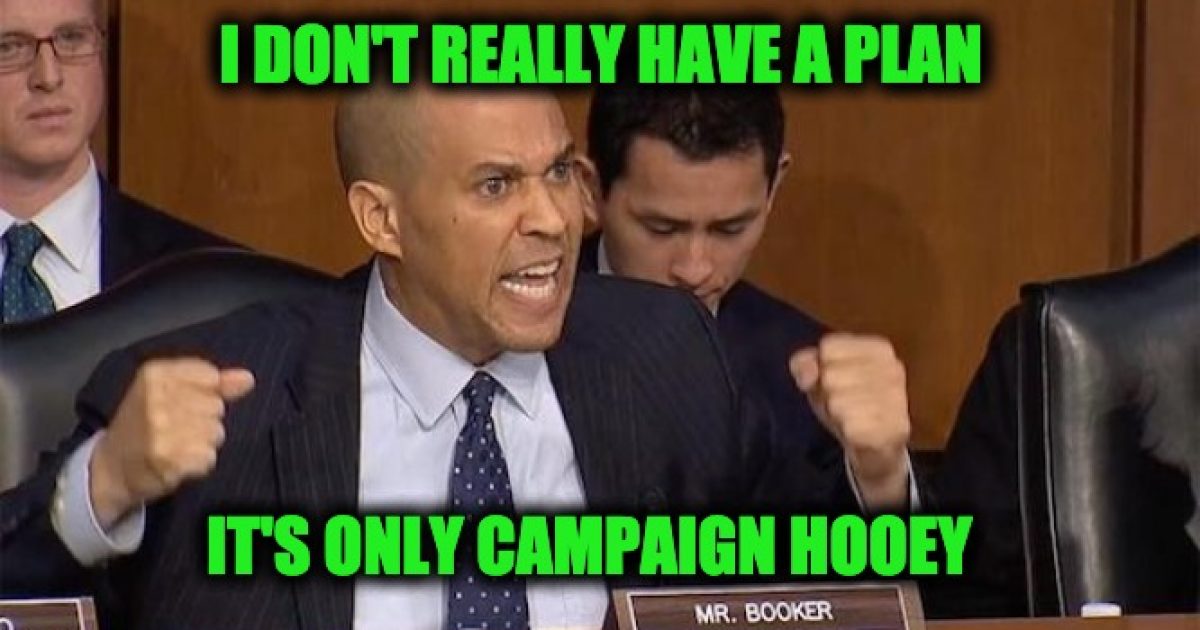 Anti-gun-rights Senator from New Jersey Cory Booker, one of nearly two dozen Democrat presidential wannabes now running to challenge Donald Trump in 2020, said he has a plan that would have prevented the horrible shooting at the Virginia Beach municipal workplace May 31st, but when asked to explain his idea he dodged the question

Tapper asked, “You said yesterday that mass shootings in America — quote — “cannot just go on in our country.” And you have unveiled a comprehensive gun reform plan. Now, ATF says that the two weapons used in the attack were handguns, not semiautomatic assault rifles. And they say that they were purchased legally.  How would your plan have stopped this tragedy, if at all? ”

Booker put on his tap shoes and answered:

Well, Jake, again, this is a tragedy today, but you know that every single day in the United States of America, in the aggregate, we have mass shootings that go on in neighborhoods like mine. I live in an inner-city black and brown community. You were there yourself. Moments after you left, we had another shooting in my neighborhood.

Perhaps it was someone shooting himself because he couldn’t take Booker’s vapid response that didn’t answer the question?

We are not helpless to stop this. This is a uniquely American problem. We have carnage in our country at levels that no other nation sees, more people dying in my lifetime due to gun violence than all the Americans that died due to gun violence in every single war from the Revolutionary now — war until now.  And so this idea that we are helpless to stop this is — the evidence points differently. We know that everything from licensing, like that Connecticut did drop gun violence in their — in their state by 40 percent, suicides by 15 percent.  We know that there are communities like Oakland that did things by treating gun violence like a public health problem and by investing in communities, empowering them. They were able to lower gun violence.  I have a comprehensive plan that… people say is bold, but I will tell you that — I will tell you what. It’s not bold. It’s common sense, evidence-based things that we can do to lower gun violence.  We are not helpless.

Tapper interrupted the monolog by Senator Spartacus and asked him to answer the question.

But you keep saying — I’m sorry to interrupt, but you keep saying, we’re not helpless.  So I’m saying, what would have prevented this tragedy? I mean, I think that’s one of the issues that people wonder about when there are these horrible tragedies. What steps specifically would have stopped the massacre in Virginia Beach?

The reality, as noted repeatedly by gun rights leaders such as Alan Gottlieb, chairman of the Citizens Committee for the Right to Keep and Bear Arms, is that no law now on the books or that has been recommended would have prevented the Virginia Beach attack.

That’s because the killer had a clean record and he legally bought to the two handguns recovered at the crime scene by investigators, according to several published reports. He purchased one pistol in 2016 and the other in 2018, both legally, investigators said. Translation: He passed background checks.

Booker dodged Tapper’s questions either because he doesn’t really have a comprehensive plan, or because he really doesn’t want to speak the unspeakable: Gun prohibition. That may keep guns out of the hands of honest people, but it still won’t prevent criminals from being armed, people like Gottlieb would say.

The Washington Examiner said Booker “tiptoed” around Tapper’s question. That was too kind. He simply did not provide Tapper with a straight answer, just a lot of bull because he didn’t want to answer the question. Booker’s BS may have sounded okay to his far left base, but to the rest of the country, it was flash without substance. And like his fellow liberals, in the wake of the Virginia Beach tragedy, Booker got caught exploiting the tragedy.

In the end, Booker’s claim of a plan that would have prevented the Virginia Beach tragedy was just a pile of hot steaming campaign bull-turds.