Trump Got A Convention Bounce From The DNC 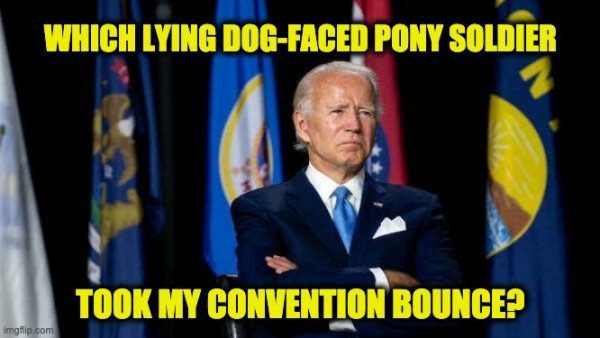 Joe Biden didn’t get a bounce from his convention.  It was President Trump who got a convention bounce from the Democratic Convention. Dan Bongino even quipped that the Trump team should send a ‘thank-you’ donation to the DNC for these results!

With November just around the corner, polling agencies are in high gear.

One of the things Rasmussen has been following is the approval numbers of both candidates, and the results are surprising.

Under normal circumstances, a convention like what the Democrats have been putting on this week gives what’s called a ‘post-convention bounce’.

But THIS time, with the Harris/Biden ticket (you don’t REALLY think Joe will be making any of his own decisions, do you?), that bounce didn’t play by the normal rules.

Was there a bounce? Sure. But it went a different direction.

It was Trump who got that bounce.

They also give a great tip for how the average person can personally verify how reliable any given poll they come across might be.

Having a bigger window into who these people are isn’t helping their cause any.

As noted by Breitbart, the drop comes after the former vice president named California Sen. Kamala Harris as his partner in the race. In the previous Rasmussen Reports survey, before Harris was announced as his vice-presidential choice, Biden led Trump by 6 percentage points — 49 to 43.

“With the Democratic National Convention in full swing and a new running mate by his side, Joe Biden holds a slightly narrower lead over President Trump in the latest Rasmussen Reports’ weekly White House Watch survey,” the pollster wrote. — Inquisitr

Suddenly, Joe’s campaigning from his bunker strategy makes so much more sense, doesn’t it?

But he can’t hide forever.

Eventually, Joe will come out of his hole, see six more weeks of campaigning and realize that even Hillary played a better campaign game than he did. And that’s pretty bad, considering she was thrown into a truck like a side of beef.

The more we see of him, the more likely it is that others will see in him what the Right already does.

That he is just an empty shell of platitudes, deflections, and lies. He is little more than the friendly and familiar mask intended to make his party’s radical policies seem benign.