‘The Feds’ Probing Whether Conservative Websites Colluded With Russians 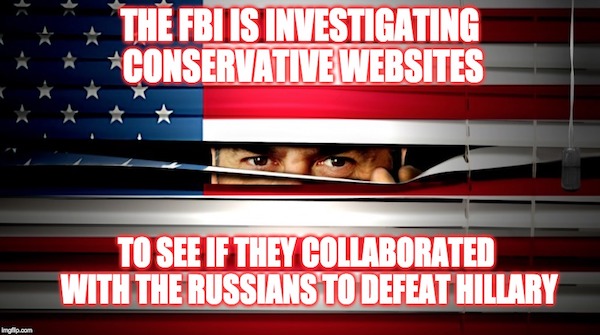 If this latest government overreach story is true, it has to be the dumbest thing I have ever seen.  Did conservative websites colluded with the Russians to defeat Hillary Clinton? If we did it’s not intentional Conservative sites, especially bloggers looked for any news that would help defeat Hillary. She would have been an awful President. Good sites first make sure the story is true and offer readers verifiable proof.  Do they use Russian sources…if they are verifiable why not? I have used videos from interviews on RT the Russian News.  Is that colluding? Well while federal investigators aren’t saying it is yet…but they are getting too close.

Read the story below from my colleague Philip Hodges on the website Eagle Rising:

As part of the FBI’s investigation into whether or not the narrative – spawned by the left that Russia colluded with the Trump campaign to elevate him to victory – carries any weight, federal investigators are also looking into conservative websites and their role in possibly colluding with the Kremlin to spread ‘fake news.’

“Russian bots and internet trolls sought to propagate stories underground,” said Mike Carpenter, a former senior Pentagon official during the Obama administration whose job focused on Russia. “Those stories got amplified by fringe elements of our media like Breitbart.”

“They very carefully timed release of information to shift the news cycle away from stories that clearly hurt Mr. Trump, such as his inappropriate conduct over the years,” he said, referring to the October release of a video in which Trump bragged about grabbing women’s genitals. That event corresponded with a surge in bot-related traffic spreading anti-Clinton stories.

An additional Russian tool was the news from its prime propaganda machine, Russia Today, with a global television and digital media operation and a U.S. arm, RT America.

Okay, do you see how ridiculous this narrative is? What they’re describing happens in every single presidential campaign. Supporters of each candidate attempt to flood the internet with stories supportive of their preferred candidate and critical of their opponent. That’s politics. This time, there may have actually been more stories on the internet sympathetic to Trump than to Clinton, because nearly everyone was assuming that Clinton would win. The internet has always been a platform for the ‘underground’ or the ‘resistance.’ Just look at how the mainstream media reported mostly hit pieces about Trump and puff pieces about Clinton. The internet responded with the converse of that.

But they’re trying to explain that this time, there was a well-timed and well-orchestrated conspiracy behind it. So, when the damaging Access Hollywood tape was released, the ‘Russian bots’ waited to spread misinformation at the ‘perfect’ time, in such a way that the news cycles mysteriously shifted their focus away from the embarrassing Trump tape.

No, Trump supporters simply responded. They shifted focus from Trump’s ‘locker room’ talk to Hillary Clinton’s atrocious decades-long record as a politician. The pay-to-play scheme between the State Department and the Clinton Foundation. Her Benghazi lies. Her ‘enabling’ of her serial sexual criminal husband.

And then they bring up Breitbart’s record page views as a suggestion that they had help from all these ‘Russian bots?’ It was a highly contested election. Everyone was tuned in. There were so many people who despised Hillary, who desperately wanted an anti-establishment outsider, but thought she was going to win anyway, that they were always online. This doesn’t mean there was a conspiracy by the Russians to undermine Hillary Clinton.

There was no conspiracy.

All it means is that Hillary Clinton was a terrible candidate, really and politically. She was unmarketable. She had a terrible image. She had a reputation for being an over-controlling, manipulative, vindictive, angry woman. All she had going for her was that she was female, and even that was debatable. The number one person behind Hillary Clinton’s loss was Hillary Clinton. I don’t really know any other way to put it.

I’d concede that there’s no evidence for Trump’s ‘wiretapping’ claim, if these lefty conspiracy theories would concede the same about their silly narrative about the Kremlin and ‘Russian bots.’

But this is the FBI that refused to indict Hillary Clinton, and the FBI that read over 600,000 of Hillary’s emails in nine days, therefore I am not surprised when they refuse to recognize that Ms. Clinton lost fair and square and is looking to blame the Russians and conservative bloggers.

Based on this story I would not be surprised if Adam Schiff begins his next hearing by bloviating against right-wing blogs.

WAIT!  I just realize, before my father’s parents passed away we used to visit them. They were both born in Russia…even if the Feds don’t believe that was collusion (we never talked politics), Adam Schiff will find a conspiracy to link it to.