Gallup: Congress, Journalists Rank Among the Worst Professions For Honesty and Ethics 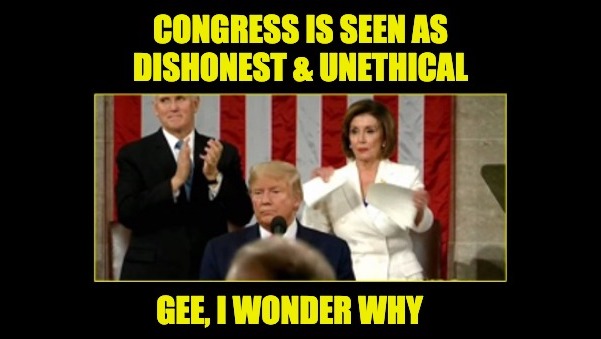 A new Gallup poll asking Americans to rank the honesty and ethics of different professions placed journalists and members of Congress low among groups such as car salesmen. congress journalists dishonest unethical

Congressional members actually tied car salespeople with a mere 8 percent rating them highly, with advertising practitioners coming it slightly better at 10 percent. (Personally, I think car salespeople got a bad rap–they are much more honest and ethical than most members of Congress I’ve met).

Rounding out low-ranking groups were business executives at 17 percent, lawyers at 21 percent, and journalists at 28 percent, which is why I left the advertising business world (for an automatic eight percentage point jump).

The two best-perceived professions should come as no surprise in a normal year, let alone in the midst of a historic pandemic – nurses at 89 percent and doctors at 77 percent (it is assumed they meant medical doctors as opposed to Jill Biden)

Police officers came in at number five, with 52 percent. There is no snark possible here. People should have a much higher opinion of cops,  as police officers put their lives on the line every day to protect our families. With police officers being the subject of defunding pushes by the left and the media, one has to wonder why there isn’t a larger outcry to defund or abolish far more detestable institutions such as the mainstream media and Congress.

Members of Congress Viewed as Unethical by Both Parties

Unlike journalists, Congressional members were universally despised in the Gallup poll regarding professional ethics, with only 8 percent of Democrats rating them highly, 10 percent of Independents, and 4 percent of Republicans. And why not really? They had a banner year.

A banner year that started with congress focused almost exclusively on drumming up and prosecuting fake impeachment charges against  President Trump rather than the coronavirus, which had found its way to America in January (see timeline at the end of this post).

That was followed up by House Speaker Nancy Pelosi ignoring President Trump, who had vowed in his State of the Union Address to “take all necessary steps” to protect Americans from the coronavirus.

In fact, Pelosi was too preoccupied with her plan to showboat by tearing up her copy of the address rather than worry about the pandemic.

FLASHBACK: Nancy Pelosi zones out during the State of the Union while President @realDonaldTrump addresses the coronavirus.

Pelosi followed that despicable effort by encouraging her constituents to visit San Francisco’s Chinatown in late February – after President Trump banned travel from China to try and stop the spread of the disease.

She would go on to blame Trump solely for the deaths of Americans at the hands of COVID.

Mitch McConnell, the Republican Senate Majority Leader, congratulated Joe Biden for winning the presidential election earlier this month and urged his colleagues to accept him as the President-elect.

President Trump responded by giving McConnell a lesson on the mood of the American people.

“Too soon to give up. Republican Party must finally learn to fight,” he tweeted to the GOP leader. “People are angry!”

Journalists Ethics Aren’t Too Hot Either.

While Congress is looked down upon by Americans in both parties, journalists’ ethics are viewed drastically different by Democrats and Republicans.

The only reason the media gets a 28 percent rating is because they are trusted by the left. Which is, of course, no surprise since a vast majority of journalists are card-carrying, bed-wetting liberals. The Gallup poll shows only 5 percent of Republicans rate the ethics and honesty of journalists highly, while nearly half – 48 percent of Democrats – give them high marks.

Come to think of it, that mark for Democrats is astonishingly low, considering the mainstream media almost singlehandedly gave the presidential election to Joe Biden.

A study conducted by the Media Research Center just weeks after the election suggests biased media coverage may have tilted the results in favor of President-elect Joe Biden.

The study consists of an analysis of eight major news stories that the MRC suggests were not covered appropriately, along with a survey of how that coverage affected the election.

It shows that a very significant 17% of Biden voters would have abandoned the candidate if their knowledge of the issues had been different on matters such as his sexual assault allegation or his son Hunter Biden’s scandal involving shady business deals.