It would be great if support was unanimous today 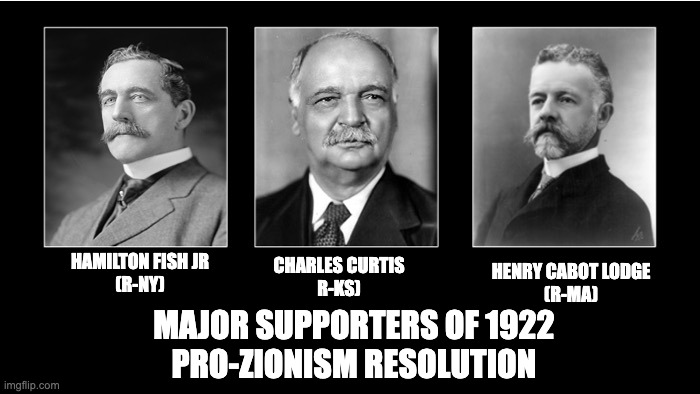 One hundred years ago this month, the United States Congress unanimously embraced Zionism. The story of how that came about involves some surprising twists and turns and a stormy debate about Jews and Arabs that could have been taken straight out of today’s headlines.

In the spring of 1922, the League of Nations—forerunner of the United Nations—was weighing Great Britain’s request to be granted the mandate over Palestine. The approval process was slowed as France and Italy jockeyed for regional influence, and the Vatican sought to prevent Jews from gaining a “privileged” position or “preponderant influence” in the Holy Land.

In the wake of England’s 1917 Balfour Declaration, pledging to facilitate the creation of a Jewish national home, American Zionists were eager to see the British receive the Palestine mandate. They hoped an endorsement of Zionism by President Warren Harding would accelerate the process. But Harding proved noncommittal, so Zionist activists turned to Congress.

Senators Henry Cabot Lodge of Massachusetts, Charles Curtis of Kansas (a future vice president), and Rep. Hamilton Fish, Jr., of New York, all Republicans, agreed to take the lead on a pro-Zionist resolution. They were isolationists and immigration restrictionists—not exactly the Jewish community’s favorite kind of politicians. Rabbi Stephen S. Wise, head of the American Jewish Congress, had recently denounced Lodge as “un-American and anti-American” because he opposed U.S. participation in the League of Nations.

Successful lobbying, however, is the art of the possible. Many Jewish leaders may have been personally more comfortable with Democrats. Still, in 1922, the president was Republican, and the GOP enjoyed large majorities in both the Senate and the House of Representatives. If three powerful Republican congressmen were ready to champion the Zionist cause, why should they be turned away?

As it came to be known, the Lodge-Fish resolution declared that “the United States of America favors the establishment in Palestine of a national home for the Jewish people.” It added that “the civil and religious rights of Christian and all other non-Jewish communities in Palestine” and “the holy places and religious buildings and sites” should “be adequately protected.”

Hearings were held before the House Committee on Foreign Affairs over four days in April.

The testimony by Zionist officials emphasized both justice and rescue. The Jewish people were entitled to rebuild their biblical homeland, and European Jews urgently needed a haven; 100,000 Jews had been slaughtered in pogroms in Ukraine and Poland in 1918-to 1921. Moreover, Zionist development of the land would benefit Palestine’s Arab population.

Two Arab-American activists, Selim Totah and Fuad Shatara appeared as witnesses. Their extremism and conspiracy theories won them little sympathy. Totah claimed the British administration in Palestine was “in the hands of the Jews.” Shatara said the suffering of Jewish pogrom victims in Europe was “nothing to compare” with the burden of heavy taxes that Palestine’s Arabs endured under Turkish rule. Both men insisted that they were not antisemitic—Totah because “I have a lot of Jewish friends,” Shatara because “I am a Semite myself.”

Then as now, Jewish anti-Zionists were front and center in the debate. Two prominent Reform rabbis, Isaac Landman of New York and David Philipson of Cincinnati, testified against Lodge-Fish, claiming the resolution could endanger the status of American Jews. “We resent the idea that the Jews constitute a nation,” Landman argued. “America is my national home.”

The anti-Zionist publishers of the New York Times were among the most vociferous critics of the resolution. A Times editorial warned that Lodge-Fish could turn American Jews into “hyphenated citizens.” The Times also highlighted the alleged misbehavior of radical Jewish settlers; it published reports from its Palestine correspondent claiming that Arab violence against Jews was “stirred up” by “Jewish Bolshevists.”

Another aspect of the episode with contemporary echoes was the role of prominent academics. Yale professor Edward Bliss Reed testified at the congressional hearings that the Balfour Declaration was the product of a Zionist-British conspiracy, complete with additional secret paragraphs that supposedly were being withheld from public view.

In speeches and writings around the same time, Harvard professor Albert Bushnell Hart called Zionism “a dangerous doctrine.” He demanded that American Jews either renounce it or surrender their U.S. citizenship. Princeton’s Henry Adams Gibbons, explaining his opposition to Zionism, wrote: “We do not hold in abhorrence the Jews, but we do hold in abhorrence the Jewish nation.”

Despite the critics, the Lodge-Fish resolution received overwhelming bipartisan support. It was unanimously adopted by the Senate on May 3 and the House on June 30 and signed by President Harding later that year.

Why was there such broad support in Congress for Lodge-Fish? Anti-Zionists claimed it was a cynical bid for Jewish votes, yet many of those who voted for the resolution had very few Jewish constituents. Was it “all about the Benjamins” (to borrow the infamous phrase of a contemporary congresswoman)? Scholars have found no evidence to suggest that Jewish donors played any role.

Most of those who voted for the resolution likely just concluded that the Zionist cause had merit and that most Americans felt the same way. The Jews did need a haven, and they did have roots in the Holy Land going back thousands of years. The Arabs did have vast lands of their own, and those who chose to live peacefully alongside the Jews would enjoy the prosperity of a developed country and the civil rights that the Balfour Declaration promised.

The passage of the Lodge-Fish resolution was a symbolic victory, and in political struggles, symbols are important. They can educate; they can inspire. The embrace of Zionism by a united Congress legitimized the cause in the eyes of undecided Americans. It galvanized American Zionists to redouble their efforts, helping pave the way for additional political victories on the road to Jewish statehood.

Dr. Medoff is the founding director of The David S. Wyman Institute for Holocaust Studies and the author of more than 20 books about Jewish history and the Holocaust. His most recent book, The Jews Should Keep Quiet: Franklin D. Roosevelt, Rabbi Stephen S. Wise, and the Holocaust, was published by the Jewish Publication Society of America / University of Nebraska Press. And available on Amazon(as are his other books).