Why Congress Can’t Accomplish Anything 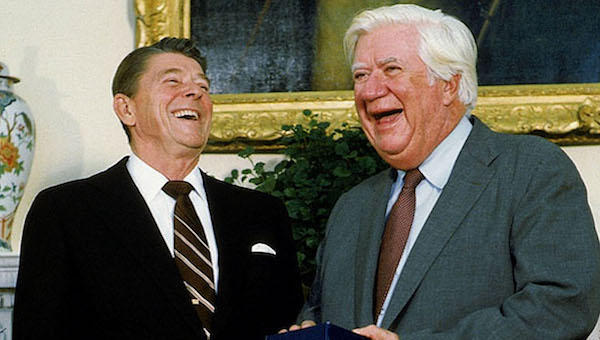 Sometimes it feels that nothing gets done because the priority of both Democrats and Republicans priority is making their party look better than their competition as opposed to making our country work better.

When Bob Dole passed away at the beginning of December 2021, he was eulogized as one of the last “old school” politicians. As a Republican, he reached across the aisle to work with Democrats. A newspaper in California, The San Bernardino Sun, wrote that his death reflected “the passing of a more collegial style of politics.”

Say what you will about any of Dole’s stances on any particular issue, but Dole did “attempt to solve the nation’s problems” and was willing to work across party lines to do it.

The outpouring of sympathy from Democratic and Republican officials reflects not only admiration for Dole’s storied career, but a longing for a time when politics was more about governing than waging grudge matches.

There are many stories about Ronald Reagan. IMHO was the best U.S. President in my lifetime. At times Reagan would argue with House leader Tip O’Neill all day but stop at 6pm.

Reagan was a powerful President who strongly believed in conservative solutions to America’s problems. O’Neill was a powerful Speaker of the House. His belief in Liberal methods to fix issues was just as strong as Reagans were on the other side,  But once it was quitting time, the two would kick back and have a few drinks together.

In his book “Tip and The Gipper, former MSNBC host Chris Matthews tells the story of his first encounter with President Reagan when the POTUS walked into one of the Speaker’s offices in the House just before he was to deliver the 1982 State of the Union address.

Matthews introduced himself, and said lightheartedly: “Mr. President, welcome to the room where we plot against you.”  Reagan replied: “Oh no, not after six.  The Speaker says we’re all friends after six.”

Now compare that to President Obama, for example. When the stimulus package of 2009 was being developed during Obama’s first month in office,  Republican leadership met with the President. They wanted to negotiate about the parts of the bill they objected to. Obama calmly looked into the Republicns’ eyes and said, “I won,”

I am not a Rabbi, nor have I ever played one on T.V.  But as a political geek who has read the Torah more than once, it struck me how we can use it to break the Washington D.C. logjam. The logjam has little to do with either party’s overall goals because they want to look better than their competition. Thus there is no reason to compromise, only to look better than the other guys.

How does any of this relate to the Five Books of Moses? In Genesis, the first book in the Bible, there are many examples of hatred between brothers. Cain killed Abel because God liked Abel’s offering better. Ishmael was harassing his half-brother Isaac and was tossed out of the family. Jacob tricked his brother Esau getting him to sell his birthright for some soup (and it wasn’t even chicken soup). Joseph was sold into slavery by his brothers because they were jealous of his multi-colored coat. It wasn’t till a pair of brothers worked together  [Moses and Aaron]  did the nascent Jewish nation gain freedom and began to develop into the Jewish nation we see now.

Republicans and Democrats have significant differences but the same overriding goals— protecting the United States and improving the lives of its citizens.

It was evident during the Reagan administration. There were significant disagreements about how to best achieve that overall goal. Unlike the personal attacks made by today’s politicians, Reagan and O’Neill developed a friendship. More importantly, the two political leaders worked together to find a compromise.

Now, 34 years later, it seems as if the two major parties, like the biblical figures before Moses and Aaron, are disagreeing without trying to work together, and very little is getting done even though Republicans and Democrats have the same overriding goals of protecting the United States and improving the lives of its citizens. The future of this great American experiment is in danger until the two sides learn to respect and compromise with their opposition.