Congress and Energy–> They Piddle, Twiddle, and Resolve

John Adams Opens up the play 1776 with the following Song

I do believe you’ve laid a curse on North America
A curse that we now here rehearse in Philadelphia
A second flood, a simple famine
Plagues of locusts everywhere
Or a cataclysmic earthquake
I’d accept with some despair
But, no, you sent us Congress.
Good God, sir, was that fair?

Somethings never change, because that could very well be talking about Congress’ attempt at solving our energy problems

Congress is talking about Suing OPEC. As if that will do anything but provide some headlines back home. Over the last 30 years, elected U.S. officials blocked plans for nuclear power plants, stopped new oil refineries; taxed cheaper ethanol from Brazil ; prevented drilling in Alaska, California and Florida; blocked the construction of liquefied natural gas ports; killed wind farms in their own backyards (right Teddy?); and neglected opportunities for public-private sector partnerships for developing fuel alternatives, if anybody should be sued it should be congress.

“I have come to the conclusion that one useless man is a disgrace, two are a law firm and three are called a Congress.” So said politician and future president of the United States John Adams, and while he was speaking about independence in the year 1776, the same could apply to energy independence in 2008. As the U.S. endures an energy crisis and imports more than 60% of its energy needs, the House of Representatives and the Senate have decided to take action. They overwhelmingly voted to modify the Sherman Antitrust Act and allow OPEC to be sued in U.S. courts for running a cartel. The Senate, however, is currently reconsidering the bill because it was shelved even after the body approved it last year. The mind reels. Over the last 30 years, elected U.S. officials blocked nuclear build-out and spent fuel storage construction; impeded the construction of oil refineries; refrained from passing meaningful alternative energy legislation; imposed an import tax on cheaper Brazilian ethanol; prevented offshore drilling in Alaska, California and Florida; delayed tighter auto fuel-efficiency standards for 30 years; blocked the construction of liquefied natural gas ports; killed wind farms in their own backyards (and back bays); and neglected opportunities for public-private sector partnerships on energy research and development. Congress got it wrong; it should sue itself instead. Instead of ineffectual and counterproductive OPEC lawsuits, Congress should look at other countries. Germany has reached 14% renewable electricity use–they’re shooting for 27% by 2020–and Denmark is already at 40%. 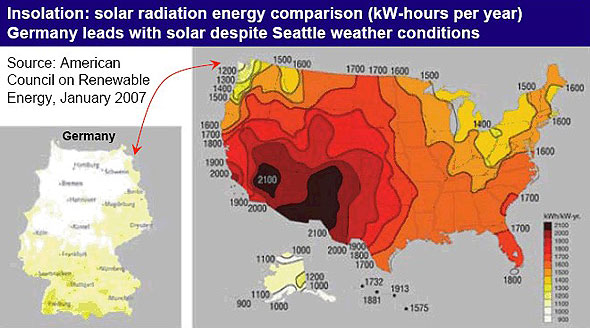 Check out the map above. With the exception of Seattle, the entire continental U.S. is much sunnier than Germany. Yet Germany has 17 times the installed solar base per capita. The same goes for Japan, where “feed-in tariffs,” or subsidies, have ended yet the solar business is thriving and competitive. Director of the U.S. National Renewable Energy Laboratory Dan Arvizu said the federal government is doing “embarrassingly few things” to foster renewable energy. Renewable energy research has fallen by 78% since 1978, and the lab’s budget is a paltry $200 million. (I hesitate to mention the cost of the Iraq War again, but it’s $1 trillion.) This is despite the fact that a handful of successful Department of Energy research and development projects yielded benefits that exceeded the total cost of the entire energy R&D program, according to a 2001 book by the National Research Council.

The solution to rely on just the private sector isn’t sufficient, particularly when intellectual property rights aren’t long enough for many energy-related investments. (Congress did, however, get around to passing the “Mickey Mouse Protection Act,” which extended that particular copyright to 120 years after its creation.) In 2006, a national task force chaired by James Schlesinger, former secretary of defense and energy, recommended that the federal government fund demonstration projects to provide proof of concept for carbon capture storage and other complex technologies. But that’s not happening on any grand scale. Meanwhile, China signs oil and gas supply deals with Venezuela, Indonesia, Kazakhstan, Iran, Saudi Arabia, Brazil, Gabon, Russia, Ecuador, Myanmar, Turkmenistan and Australia. It isn’t wasting much time applying Chinese antitrust laws to OPEC. The world is changing much faster than U.S. legislature’s ability to comprehend it. The bill’s misplaced sense of entitlement is matched only by its pandering delusion.

Oil prices will likely approach a breaking point of some kind later this year. Yes, the supply-demand equation is tight (U.S. reserves per well are half the levels they were a decade ago), and marginal costs are going up (more costly horizontal and directional drilling now account for 40% of wells drilled). Even so, marginal costs are $70 a barrel, not $140, and Organization for Economic Cooperation and Development demand is being destroyed at a rapid clip. China uses more energy per unit of gross domestic product than any country in the world, so they’re not exempt from energy pressures either; food and transport account for 45% of their consumer price index.

As for global economic data, they’re all pretty downbeat: housing, labor markets, manufacturing surveys, service sector surveys, leading indicators and small business surveys. A JPMorgan Securities research report on the Institute for Supply Management service sector survey captured the essence of recent data: “There were no redeeming features in the details.” Treasury Secretary Henry Paulson’s speech in London earlier this month, which indicated that the U.S. needs more tools to deal with failed securities companies (not just banks), is another sign of the times. A research report this week deemed over $100 billion in financial sector assets as “inestimable and undefined.”

“Investing in the time of cholera” is still the strategy we’re pursuing, which includes oversold first-lien leveraged loans, structured notes with principal protection down to 1150 on the S&P 500, Asian infrastructure funds (to accommodate the $1 trillion being spent by China alone), and private equity funds sifting through the remains of the day (banks and their mortgage holdings). Our largest diversified hedge fund has generated positive returns this year–and remains the foundation of our hedge fund offering. As mentioned last week, subprime assets are priced assuming 80% default and 50% loss severity. The backdrop reminds me, in some ways, of February 2003, when Bloomberg headlines were filled with unyielding forecasts of bear markets, Al Qaeda manufacturing of biological weapons, Spitzer lawsuits against the banks, PIMCO’s description of the U.S. perched on a deflationary cliff, weakening job markets, and skepticism about fiscal and monetary stimuli. I don’t know if we’ve hit bottom yet, but I am pretty sure that when we do, you won’t be reading about it in the press. Michael Cembalest is chief investment officer of JPMorgan Private Bank. This is excerpted from one of his bi-weekly “Eye on the Market” e-mails, which Cembalest sends to his clients.