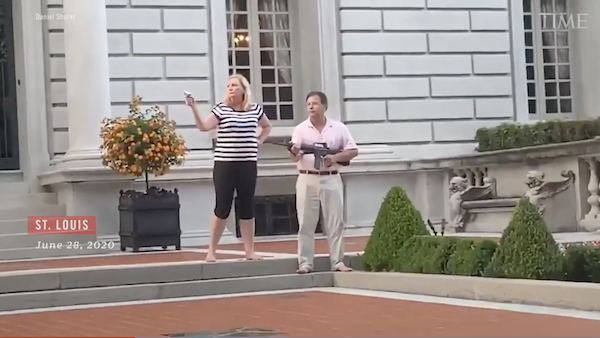 It seems that residents wanting to defend their homes from a mob are no longer allowed to exercise their Second Amendment rights in the city of St. Louis.  On Friday, KSDK reported that local prosecutor Kim Gardner got a search warrant for the McCloskey home. And based on the court order,  police seized the rifle used by Mark McCloskey, the St. Louis resident who used the weapon to defend his home from a group of protesters who threatened to kill him and his wife. They also seized the handgun Patricia McCloskey used, which was being held by their former attorney. Confiscate Guns From Couple

KSDK, which first reported the confiscation, said it “is not aware of any charges against the McCloskeys at this time, and the warrant served Friday evening was just for the guns.”

Late Friday evening 5 On Your Side confirmed attorney Al Watkins was no longer representing the McCloskeys, and that attorney Joel Schwartz had taken over. Schwartz confirmed a search warrant was issued at 8 p.m. Friday night, but would not say what was taken from the home. Schwartz also said he does not know where the handgun is.

Schwartz told 5 On Your Side he does not believe charges are warranted against the McCloskeys and that he hopes to meet with St. Louis Circuit Attorney Kim Gardner’s office next week, but that there is no official appointment at this time.

CBS News spoke to the police who said:

They were executing a search warrant when they seized a semi-automatic .223 caliber rifle, which matches the description of the weapon Mark McCloskey was seen holding.

St. Louis Police Sergeant Keith Barrett said the weapon was seized as part of the investigation into the viral incident from June 28. Barnett did not name the McCloskeys, but the warrant was executed at their address.

Their former attorney Al Watkins said he turned over the pistol that Patricia McCloskey pointed at the mob because she worried about her personal safety. Watkins noted that the handgun he gave to the police wasn’t kept for self-protection. It wasn’t a working gun. It was only used as an exhibit in the McCloskeys’ own law practice for a lawsuit against the handgun manufacturer.

During the incident with the mob, Mark McCloskey had the safety of the semi-automatic rifle engaged and did not finger the trigger. But that didn’t stop the local prosecutor from getting a search warrant so she could confiscate the firearm. It’s crazy, residents who legally own firearms were targeted and had their weapons seized without due process.

And Missouri has a slew of laws that could protect the McCloskeys from criminal charges, including “stand your ground,” the “castle doctrine,” and open carry.

Under Missouri law under the castle doctrine, an individual has a really expansive authority to protect their own lives their home, and their property. And I think the story here to watch here is the local prosecutor Kim Gardner has an abysmal record in prosecuting violent crime and been complicit in the release of dozens and dozens of inmates who’ve been charged with violent crimes and has a record of making politically motivated decisions not based on the law. So this is certainly something to watch

Below is a video of AG Schmitt’s interview with Bream.