Condition Palestinians Should Be Required To Meet Before Biden Restores Relations

Keep The Commitments They Made But Never Fulfilled 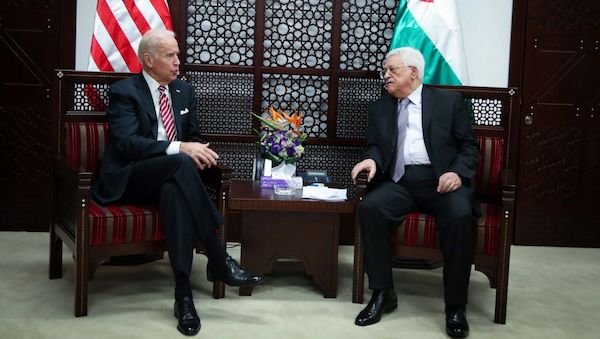 Biden administration officials have indicated that they intend to restore some aspects of the U.S. relationship with the Palestinian Authority (PA) that the previous administration suspended in the near future. The PA is anxious for a resumption of American financial and diplomatic support. But what should Palestinian leader Mahmoud Abbas be required to do in order to merit a renewal of relations? conditions Palestinians should meet

Although I represent a right-of-center Zionist organization, Herut North America, I don’t agree with those on the right who say that Abbas should be required to make a new commitment or gesture in order to resume relations with the United States. I think Abbas should merely be required to honor the commitments and promises he has already made in the 1993-1995 Oslo Accords. Is that really so much to ask?

Middle East policy experts constantly say there is not enough trust between Israel and the PA. They’re right. The reason most Israelis — and also most American Jews — have so little trust in the PA is because Yasser Arafat, chairman of the PA from 1994 until he died in 2004, and his deputy, Abbas, made a series of written promises in the Oslo Agreements of 1993-1995. The Palestinians killed the Oslo Accords before the ink on Yasser Arafat’s signature was dry.

The American government invested its energy, prestige, and substantial amounts of taxpayer money in the Oslo Accords. Among other things, the United States rewarded the Palestinian Authority with $500 million in annual aid. That came to a total of more than $1 billion before the Trump administration ended it.

Naturally, when the United States contributes to a peace agreement, the least expected is that the two sides will adhere to the terms. Israel’s major obligation was to remove its troops from the areas where 98% of the Palestinian Arabs live. It did that in 1995. And Israel was required to permit the Palestinian Arabs to create their own regime to govern their own lives. Israel did that, too.

But we’re still waiting for the PA to keep its promises.

As part of Oslo, the two groups signed “Letters of Mutual Recognition”—the Israeli government recognized the PLO as the legitimate representative of the Palestinian people. And the PLO’s Palestinian National Charter (PNC) was to be amended to recognize Israel’s right to exist and renouncing violence.  But this was never done, and thus the original Charter stands to this day.

In the Oslo Accords, the PA agreed to “outlaw all organizations (or wings of organizations, as appropriate) of the military, terrorist or violent character.” Yet Abbas has never outlawed PLO factions such as Fatah and the Popular Front for the Liberation of Palestine (PFLP), which still have ties to terrorism. He hasn’t even expelled them from the PLO, which he chairs.

The PA also agreed to “abstain from incitement, including hostile propaganda” against Israel. Obviously, Abbas hasn’t done that. The PA’s government-run media and government-run schools are filled with anti-Jewish and anti-Israel hate.

They agreed that if Israel requests the extradition (“transfer”) of a terrorist, then the PA “shall effect the arrest and transfer requested.” Israel has submitted dozens of such requests, and the PA hasn’t honored any of them.

These are not the only obligations the PA undertook, but they are among the most important ones. They are important because they would demonstrate that the Palestinian leadership has really changed — that they sincerely want to live in peace with Israel. And wasn’t that the whole point of the Oslo Accords?

There’s no point in the United States trying to broker a new agreement until the PA has demonstrated that it is honoring the original agreement. Since the day they were signed, the Oslo accords were treated by the Palestinians as a worthless piece of paper.  A new agreement would be completely meaningless and unreliable unless the original commitments have been kept. That’s what the United States should require Abbas to do. No new concessions, no gestures, just keep the existing promises. That’s not too much to ask.

Moshe Phillips is the national director of Herut North America’s U.S. division. An Unapologetic Zionist Organization of which The Lid is an active member.  Why don’t you join us? More information is available at www.herutna.org.

Much of this article was first seen in the Jewish Journal.