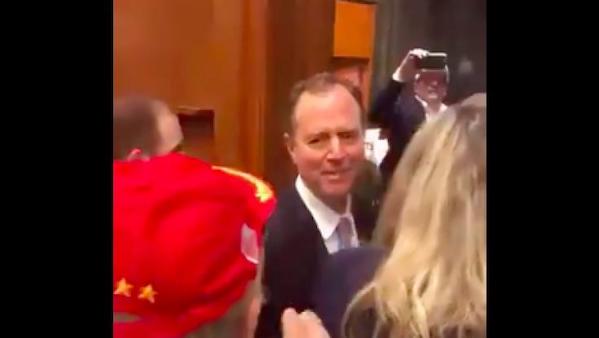 It seems that these days, Democrats are doing nothing but angering average Americans with their sham impeachment of Donald Trump, which in reality, is little more than a seditious conspiracy to enact a coup d’etat against a duly-elected president based on lies, innuendo and fake news. Comrade Schiff

On Saturday, angry Trump supporters confronted shifty, lying Adam Schiff, one of the Democrat Party coup leaders, after the Senate trial on Saturday, in which the Trump team began to lay out its case against impeachment.

“Move to Venezuela, Mr. Schiff,” one of the protesters shouted.  Schiff dismissed the verbal attack and continued on his way.

Adam Schiff confronted by Trump fans and told to move to Venezuela! ?? pic.twitter.com/w40CHdoZ2Q

The response was overwhelmingly in favor of the protesters.

He’d fit right in with their communist government!

The entire DNC has gone communist wether they admit it or not. It’s not just AOC, #CrazyBernie or #Pocahontas Warren even #CreepyJoeBiden still pushes the same policies as the rest. All democrats fall in line when it counts!

That’s awesome. He should deal with this on a daily basis.They want to destroy our prosperity and freedom they need to feel the sting of American pride and our refusal to give it up.

We tend to agree. Perhaps if many more Americans had taken the time to stand up to these radical leftists a long time ago, we wouldn’t be in the shape we’re in now.

Two former citizens of the Soviet Union, one with a MAGA hat on heckling the king of liars. I think they REALLY know a Russian agent with they see one, and they let him know it. Schiff just brushes it off, as he talks anti-Russia, but they spotted the a real Russian tool.

We were unable to independently verify the above statement, but we do agree with this sentiment wholeheartedly. And if they suffered living in the USSR, it is understandable why they want Schiff to suffer in Venezuela.

Those two older men were not at all afraid to speak up! I enjoyed their passion & candor, (a bit crude), but it shows their anger for lying scum! It's the VOICE OF REAL AMERICANS!

Think he’ll get the message? We’re not going to hold our breath.