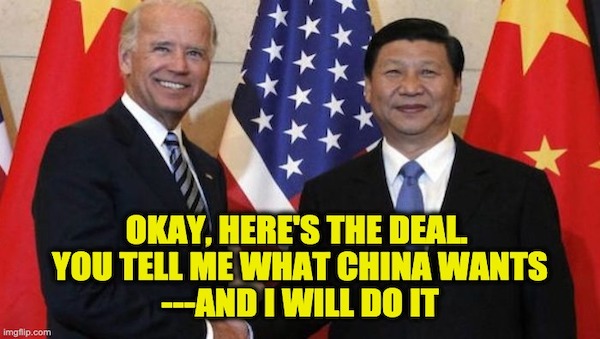 Dementia Joe is hard at work validating that other nickname: ‘Beijing Biden.’ Xi couldn’t have hand-picked a candidate more friendly to China’s foreign policy. What an amazing coincidence (NOT). Communist China propaganda

Pay no attention, for example, to any of that testimony from Biden’s business associate. The corroboration of the details on Hunter’s laptop is assuredly NOT news. We know this because the Democrat-aligned news media and Big tech have told us so.

Biden has surrounded himself with advisors and Cabinet members that are so far beyond being ‘soft’ on China—impotent would be a better word. But even in His first few weeks in DC, his decisions are enacting exactly the kind of changes that Xi would most hope for.

It’s reminiscent of a headline from last spring: CLAIM: China Played Biden And Obama ‘Like A Stradivarius.’

What is his latest policy gift to Xi? On the last day of 2020, Trump signed a policy making it harder for China’s Confucious institutes to infiltrate schools by requiring that primary, secondary, and post-secondary institutions disclose their relationships with Confucious Institutes — an essential tool China’s Communist Party has been using to establish networks in communities intent on both spying and peddling influence beyond their own borders.

“The rule would require colleges and K-12 schools that are certified to have foreign exchange programs to disclose any contracts, partnerships, or financial transactions from Confucius Institutes or Classrooms (the Confucius Institute offshoot for primary and secondary schools),” Axios noted.

And the Trump administration’s proposals were well-warranted: the well-funded, controversial operations disguise themselves as language and culture initiative despite being replete with “undisclosed ties to Chinese institutions, and conflicted loyalties,” Chinese state propaganda, and intellectual property theft, according to the Federal Bureau of Investigation (FBI) and U.S. Department of Justice (DOJ).

Records from the Office of Information and Regulatory Affairs, however, reveal that Biden nixed the policy on January 26 – less than a week into his White House tenure. — NationalPulse

The complaint has been that Joe Biden has priorities in conflict with America’s best interests… including known potential financial conflicts involving foreign investors connected to the Chinese Communist Party.

When Trump asked uncomfortable questions about any causal relationship between Biden’s boast about getting a Ukrainian prosecutor fired and the criminal inquiry that the prosecutor had been pursuing against Hunter Biden’s company TRUMP was accused of wrongdoing. We were all forced to go through the facade of an Impeachment Inquiry — turning the attention of Congress away from more pressing concerns like a nasty virus which had already found its way to American shores while Pelosi was waiting for her fancy impeachment pens to arrive.

It raises the obvious question:

Ongoing business ties to China give an idea of how the Biden family could be incentivized to benefit from such a reversal in policy.

What is NOT clear is how the interests of the United States Of America could be well-served by this lessening of restrictions on a tool an international rival has been freely using to spy, not just on the Country as a whole, but even a particular member of Congress on sensitive committees who may or may not have dipped his wick in a trap set by a Chinese Honeypot.