James Comey Is Getting Worried, Is A Perp Walk In His Future? 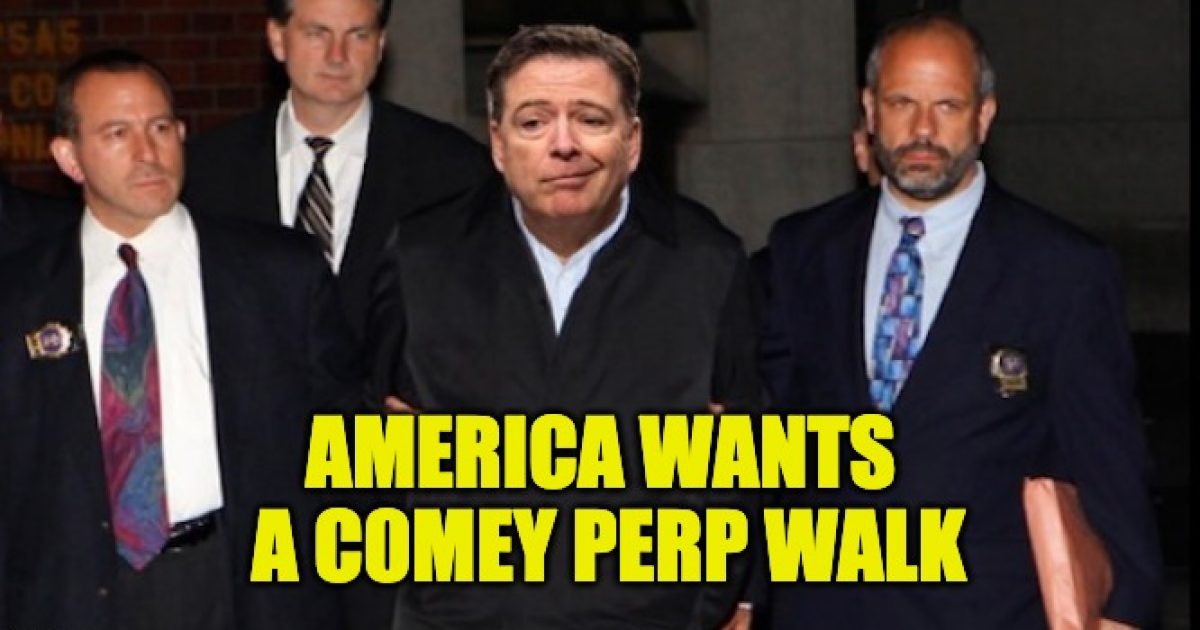 Kevin R. Brock is the former assistant director of intelligence for the FBI. In an op-ed for The Hill titled “James Comey is in trouble, and he knows it,” Brock explained that the former FBI director is a target thanks to Attorney General William Barr’s recent statement that he’s investigating how FBI handled the 2016 election, specifically the counterintelligence operation opened against the Trump campaign investigating how the Trump probe began.

Brock believes Comey is in trouble and deserves every bit of it. Brock says former FBI Director James Comey’s team may have run afoul of “strict guidelines” in its counterintelligence investigation of the Trump campaign during the 2016 election.

He believes Comey hears the footsteps or as he put it “James Comey’s planet is getting noticeably warmer. Attorney General William Barr’s emissions are the suspected cause” and he ” apparently has decided that photos of him on Twitter standing amid tall trees and in the middle of empty country roads, acting all metaphysical, is no longer a sufficient strategy.”

No, Comey has realized, probably too late, that he has to try to counter, more directly, the narrative is being set by the unsparing attorney general whose words in front of the Senate Judiciary Committee last week landed in the Trump-opposition world like holy water on Linda Blair. Shrieking heads haven’t stopped spinning since.

And so we’ve seen Comey get real busy lately. First, he penned a curious op-ed in The New York Times. Then a Times reporter, with whom Comey has cooperated in the past, wrote a news article exposing an early, controversial investigative technique against the Trump campaign in an attempt to get out front and excuse it. Next, Comey is scheduled to be encouraged on friendly cable news “town hall.”

Brock concludes with a prediction for the future,

“Comey will claim that everything he did in the FBI was by the book. But after the investigations by Department of Justice Inspector General Michael Horowitz and U.S. Attorney John Huber, along with Barr’s promised examination, are completed, Comey’s mishandling of the FBI and legal processes likely will be fully exposed.”

Much of America hopes that happens, it will go a long way to fixing the tattered reputation of the FBI. The perception is that under Comey they were crooked. It’s not a great time to be an FBI agent thanks to James Comey.

Crooked @JamesComeyFBI is in trouble and he knows it. Three internal investigations are underway and the outcomes will not be good for him. https://t.co/aurkGFEJkO #KAG #Trump2020 #MAGA
Via @BigFurHat @Mr_Pinko @KLSouth

ARREST HIM: James Comey is in trouble and he knows it. “His strange, desperate statements and behaviors betray his nervousness and apprehension. In a way, it's hard to watch. “ #JamesComey https://t.co/WspqIEOc4n

Comey had help. Obama and his administration used the FBI, as well as the CIA, and DOJ to spy on and harass the Trump campaign and the Trump Administration.

If the DOJ or Huber reports that Comey broke the rules, here’s hoping he is handcuffed and perp-walked into a federal courthouse for the many misdeeds of the FBI he led.