COMEY (Video): Others In ‘Similar Situation’ Would be Punished, But NOT HILLARY 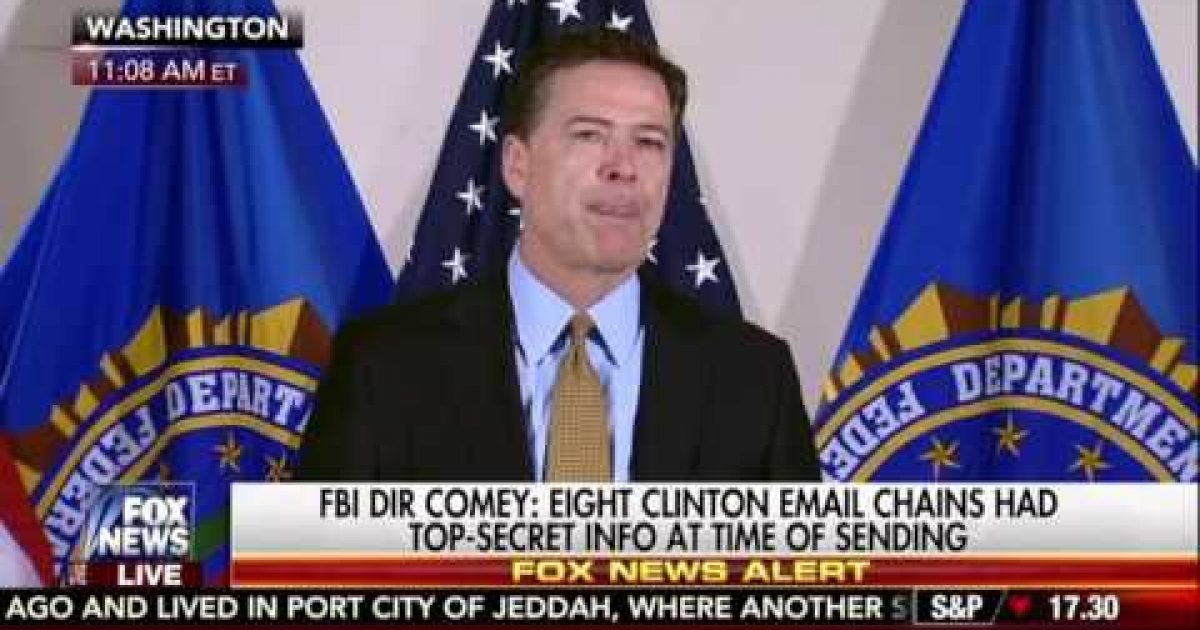 Strange?  FBI Director Comey said Hillary screwed up big time, he raked her over the coals, saying she lied about saying there was nothing on her server that was classified before she received it, while he can’t discern whether she was hacked he knows people who she emailed to were hacked.  He actually seemed disgusted when he said Hillary Clinton was reckless, and that in other cases she would lose access to top secret information. But in the end he said the FBI would not recommend prosecution because no reasonable prosecutor would bring charges (more on that later).

Comey began by saying he had not coordinated his statements with anyone in the administration and then  gave a 15 minute detailed statement about the investigation.. He said they found 58 email chains which contain classified information at the Clinton received them.  He also said that some of the information sent by Mrs Clinton did contain these classified markings so Mrs. Clinton has publicly said nothing was marked classified at the time. Comey went on to say that someone in her position and the others around her should have recognized the sensitivity of the information they were handling and that is gross negligence .

There is evidence to support a conclusion that any reasonable person in secretary Clinton’s position or in the position of those with whom she was corresponding about those matters should have known that an unclassified system was no place for that conversation.

According to the law, that’s enough to bring charges.

According to the statute US 793 subsection F, the statute Hillary violated, there is no requirement for intent:

Comey said that they have to assume this information was accessed by third parties, even hostile nations, because the server was not set up with the site kind of security you would even find in a government system or even on an email system such as Gmail.

None of these emails should have been on any kind of unclassified system, but their presence is especially concerning because all of these emails were housed on unclassified personal servers not even supported by full-time security staff, like those found at departments and agencies of the U.S. government — or even with a commercial service like Gmail,

But he did not think this was the case that a prosecutor would pursue:

Although there is evidence of potential violations of the statute regarding the handling of classified information, no reasonable prosecutor would bring such a case.

That’s the strange thing.  Comey basically said Hillary broke the law, but he is not recommending prosecution because he doesn’t think they will bring charges. But how does he really know unless he recommends that they bring charges? They certainly did with General Petraeus.

Oh and remember what Hillary said about using the private email so she didn’t have to use more than one device, according to Comey that was a lie also:

Secretary Clinton used several different servers and administrators of those servers during her four years at the State Department, and used numerous mobile devices to view and send email on that personal domain.

Once again we learn there is one set of rules for the Clintons and a different one for the rest of us. Comey even says it:

To be clear, this is not to suggest that in similar circumstances a person engaged in this activity would face no consequences. To the contrary, those individuals are often subject to security or administrative sanctions but that’s not what we are deciding here.

Even though she isn’t being prosecuted, what Comey said today (see video below) is that every statement Hillary Clinton has made about the email scandal has been proven to be a lie. She carelessly exposed national security information and assets to possible hacking by hostile powers.

If her last name was anything other than Clinton this would disqualify her from being our next president. As described by Comey, Hillary Clinton does has neither the integrity nor the judgment to be our nation’s Commander-in-Chief.

In the end I don’t believe Comey was comfortable with his actions, at the end of his statement he kind of stormed out with out taking questions.

Comey didn’t mention what happened to the corruption investigation against Hillary.